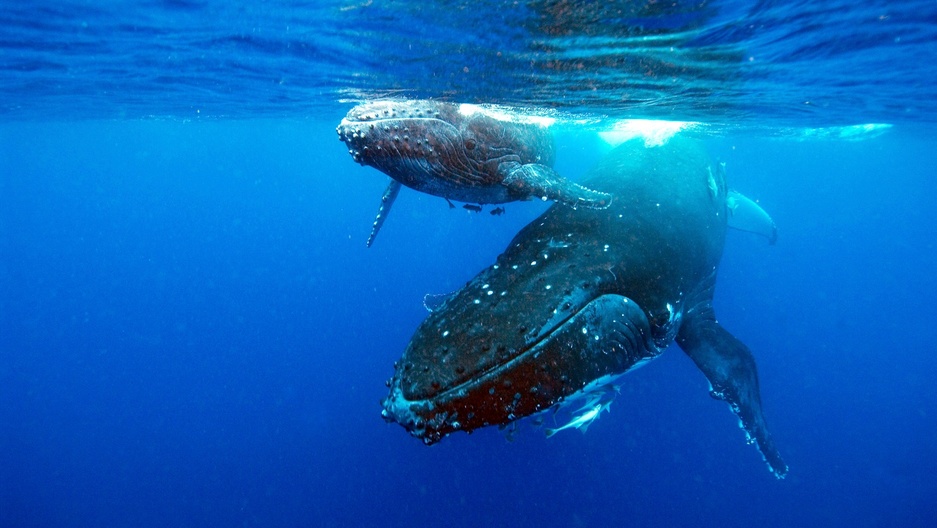 Humpback whales' remarkable ability to produce sounds is part of their biology. But the songs they sing is in their culture. Researchers looking at how the songs of whales change over time have learned that a new song can catch on and spread across populations of thousands whales in a matter of months, in much the same way that a hit song spreads across a country.

The authors of a recent paper, Ellen Garland and Michael Noad of the University of Queensland, used recordings of humpback whale songs recorded in the South Pacific Ocean. They were aware that humpbacks changed their songs seasonally, and that all the males in a population would sing the current season's song, but they didn't know how the change took place. Garland and Noad saw that new songs consistently arose among whales in a western Pacific population, and rippled eastward in a giant wave. The new songs are presumably carried by males travelling between populations, or when populations converge at Antarctic feeding grounds. They also found that the rate of change among whale songs was a lot faster than previously thought. "Brand-new song types would appear in a population and then revolutionize the song in that population within a season, say 2-3 months," Garland, now a scientist with the National Oceanic and Atmospheric Administration, tells Kurt Andersen. "They're learning this new display, throwing the old one right out the window, and doing it in a very rapid time."

Biologists don't know why humpbacks sing, but they know that only the males do it, so they assume that it's used to attract a mate or to challenge other males. (Humpbacks of both genders and all ages also make what scientists call social sounds, which may be more communicative in purpose.) For Garland, the discovery of rapid song change and spread is analogous to the way human cultural change happens. "These rapid changes are like the music industry or like fashion," she says. "When someone's wearing a new fashion, everyone suddenly wants to wear that new piece of clothing."

Biologists are amassing a growing body of evidence of learned behaviors in non-human animals like apes, birds, and whales. "The more research that everyone is doing, the more they're finding that different animals have at least one if not a suite of cultural traits."

Bonus tracks: Humpback whale songs
The recordingsbelow are from humpback whales recorded in the South Pacific Ocean in successive seasons --- you can hear how theorder and type of sounds in the songs change significantly.(Recording credits: Ellen Garland and Michael Noad.)