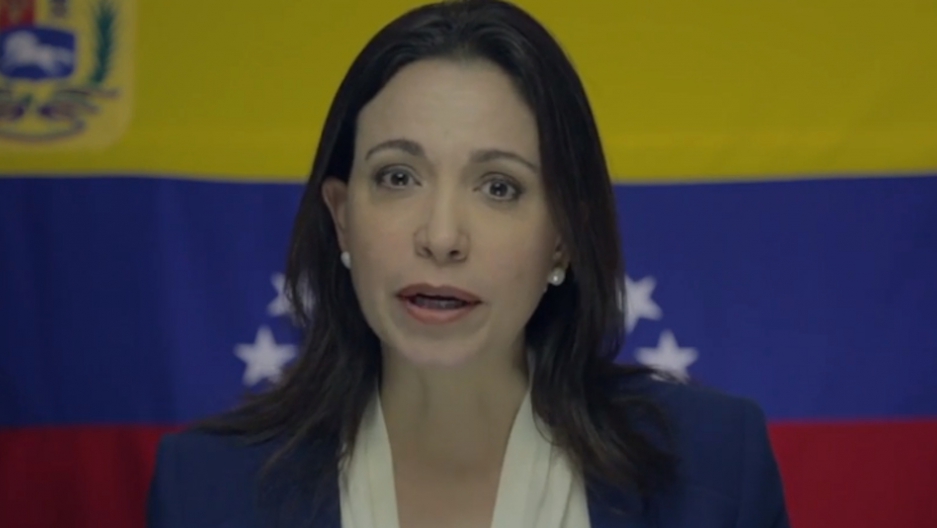 You may not have heard of Maria Corina Machado. But in Venezuela, she's made a big name for herself standing up to President Nicolas Maduro.

A few recent highlights in the life of this popular Venezuelan opposition politician: She helped rally huge street protests. She injured her face in a legislative brawl, and eventually was booted from office. And last spring, she traveled to Washington, DC for this hemisphere's top diplomatic forum, the Organization of American States — but her government and its allies blocked her from speaking.

Now Machado is vowing to fight charges that she was involved in an alleged plot to kill President Maduro. On Wednesday, she had a hearing date at the Prosecutor’s Office. (Caracas Chronicles, a blog critical of the Maduro government, is live blogging it here.)

Before heading off to her indictment, Machado tweeted a video message, which is posted below in Spanish (excerpts roughly translated into English by GlobalPost follow).

We know what’s going on in Venezuela.
Our country is collapsing. It’s total chaos. And those clinging to power and are responsible for this situation have decided to respond by repressing and persecuting.
They’re trying to silence everybody, from union members to journalists, tweeters, mayors, human rights defenders, anyone of us who fights for truth.
Today that’s what I’m charged for. They accuse me of a monstrous crime that everyone in Venezuela and the world knows is a big lie.
They charge me because I tell it like it is. Because I tell Maduro every day that he must resign. ...
... Because we denounce the corruption and the abuse. Because we accompany the students and workers in their protests and their demands.
They charge me because we are organizing a formidable citizens platform ... to carry out the urgent transition to democracy in peace.
Many ask me, why am I turning myself in?
I’ll respond with what I told my own children when they asked me the same question.
I am not turning myself in. I am presenting myself to defend the truth.
What’s the option? Flee, keep quiet, give up?
Our only option is to fight. It’s to confront lies with the truth, because truth always prevails.
The weapon these dictatorial regimes have for remaining in power is the fear they sow in citizens.
... In Venezuela the people are rebelling. We are an enormous majority that wants profound change.
Pain and anguish unite us, but so do our dreams and our democratic convictions.
That’s why it’s time to fight and go forward. My message to all right now is: Rise up, because we are going to succeed.

Machado has amassed a large following for challenging the government, but she clearly has some angry enemies outside of Maduro's inner circle, too.

Critics call Machado a patrician elitist whose support for the de facto government that briefly ruled during the 2002 coup [against Hugo Chavez] undercuts her democratic credentials. Her wealthy background led Chavez to mock her as a "little bourgeois girl."

A picture of her smiling with US President George W. Bush in a 2005 meeting at the White House has served as fodder for accusations by "Chavistas" that she is a pawn of Washington.

Whatever your views of the Venezuelan government, both loved and hated for its brand of oil-fueled socialism, Machado’s words carry a powerful punch.