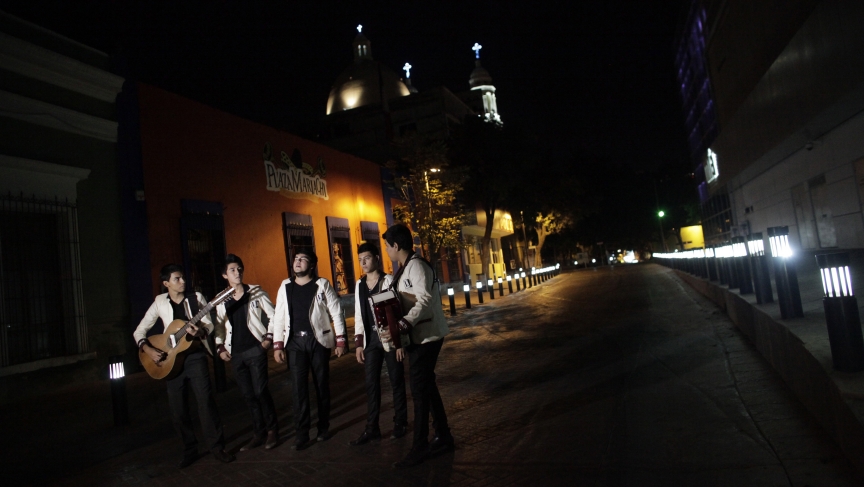 Members of a band record a narcocorrido in downtown Culiacan, Mexico.

Protests have erupted across Mexico in the last month after the probable massacre of 43 students by a drug gang affiliated with police. Yet, hit songs in Mexico have long glorified the drug cartels and are getting ever more graphic.

The protests have been powered by rage over the way drug cartels have infiltrated every level of government and, indeed, every aspect of life in Mexico. Cartels are even a powerful force in Mexican pop music.

Songs known as narcocorridos, which relate tales of drug kingpins and smugglers, have been popular for decades. One song called "Contrabando y Traicion," or "Contraband and Betrayal," was such a hit for Los Tigres del Norte in 1973 that many Mexicans still believe its main character is a real person.

Like gangster movies in the US, narcocorridos often tread a fine line between judging and glorifying their subjects. “There’s a little bit of the underdog, the outlaw rebel” quality in the figure of the narco, says Carolina Miranda, a staff writer for the Los Angeles Times.

But over time, like the gangster movies, narcocorridos have changed. The latest embrace graphic violence.

A new trend known as Movimiento Alterado are “narcocorridos that don’t tell cinematic, poetic stories about smuggling, the way Los Tigres do,” Miranda says. “They’re about chopping heads off, they’re about killing. The singers carry bazookas. It is as hyperviolent as violence can get."

Some songwriters even work on commission from drug lords. "I don't want to imply that everyone is doing this, but there is this very direct connection," Miranda says.

Narcocorridos are even popular in the US. In fact, many of the most popular songs are produced by the American Twiins Music Group based in Burbank, California.

Miranda says there are some loose parallels between narcocorridos and gangsta rap, but the context in Mexico is different: Drug cartels have infiltrated the Mexican state itself, meaning narcocorridos "almost [have] become propaganda for the narco state."

“The music is a symptom of a much larger problem, and the culture is a reflection of that” she says. “But we, as consumers of culture, can take a step back and think about what we’re buying, what we’re listening to, what we’re celebrating every time we hit play on iTunes.”