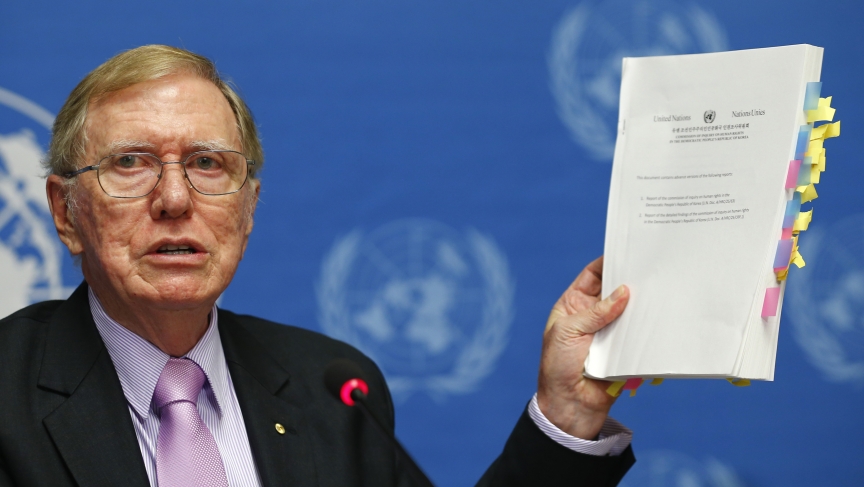 Michael Kirby, who helped lead the Commission of Inquiry on Human Rights in North Korea, holds a copy of his report during a news conference at the United Nations in February 2014.

The United Nations passed its toughest resolution yet on North Korea’s dismal human rights violations on Tuesday. Some 119 nations approved a recommendation for the UN Security Council to consider sending North Korea's leaders to trial at the International Criminal Court.

The UN report that set this process into motion was co-chaired by Michael Kirby. He is a former justice on the High Court of Australia, which is equivalent to the US Supreme Court, and for the last two years he led the United Nations Commission of Inquiry on North Korea. I spoke with Kirby last week, ahead of Tuesday’s vote in the General Assembly and the following is an edited transcript of the interview.

Q: Is the UN going to go after Kim Jong-un on the charge of crimes against humanity?

I don’t think the objective is ‘go after’, as you put it, Kim Jong-un. His hands have been on the levers of power for only the last 2.5 years or so. The issue is whether the United Nations will render the Democratic People’s Republic of Korea accountable under international law for crimes against humanity, which the UN Commission of Inquiry has found to be established on probable grounds. That is going to be the test. Hopefully, it will be recommended to the Security Council to take the matter further.

Q: Do you think the United Nations should refer North Korea to the International Criminal Court?

Undoubtedly. We were not a prosecutor. We were not a court or a tribunal. But we were a Commission of Inquiry. We conducted an extremely thorough investigation. We recorded this and accounted for it to the United Nations Human Rights Council and the General Assembly. And the material that we gathered, of which we had a great amount, does demonstrate that there is a strongly arguable case for prosecution. Indeed, it’s a compelling case. In fact, if the case of North Korea is not a case that would warrant referring the issues of that country to the International Criminal Court, it’s really very difficult to conceive of a case that would be suitable for such a reference.

Q: Why has it taken so long for the UN to address North Korea’s dismal human rights record?

North Korea has actually been brilliant in its international strategy. It’s pulled the shutters down, pulled up the drawbridge and it controls very strictly the few people that do get into the country. It has systems of controlling its own population. And it doesn’t have links with the Internet. It doesn’t allow its citizens to have links with the outside world by telephone or by mail. Therefore, it’s basically just cut itself off. And basically, unless you’re willing to take on a UN inquiry into human rights or you would contemplate the unthinkable, of sending troops or taking other military action, that really puts [the DPRK] outside the scrutiny of the world. But fortunately, the world was fed up and the Human Rights Council, without a vote, established the CoI. We conducted our investigation. Our report created something of a sensation. And now, the issue will be whether the UN stays the course. I hope that all the talk that we hear about accountability for grave crimes will come to pass.

Q: China is North Korea’s only real ally right now. Do you think Beijing might let this case go to the ICC?

Certainly, China is a very important ally. When the CoI came to a vote in March 2014, there were six votes against adopting the report and China was one of them, but there was also the Russian Federation, Vietnam, Venezuela, Cuba and Pakistan. North Korea has a number of allies. Some of them are probably more sentimental than close. As to what China will do, it has expressed itself as opposed to country-specific investigations. But that was a somewhat formalistic stance, given that they had the CoI report and it just won’t go away. It’s there for the whole world to see. China is a great power, a hugely important economy. It’s trying to build the rule of law in its own jurisdiction. I may be wrong. But I have a suspicion that China has left North Korea a little uncertain about its stance, because it’s difficult otherwise to explain the many steps taken in the last two months on the so-called charm offensive by North Korea, to try to make itself more acceptable to the international community. It’s done many things that are, by comparison to the last few decades, truly astonishing. Some of those steps are to be welcomed. They’re good. But they don’t erase the terrible crimes against humanity which the CoI has put before the world. And accountability for those crimes is essential.

Q: What’s at stake here in the bigger picture?

North Korea offering a few crumbs to the international community is not a reason for the world to feel so grateful that it takes its eyes off the ball and doesn’t insist on accountability for crimes against humanity. These are extremely grave international offenses, the kind that the Nazis were guilty of. And in our world, the whole point of establishing the charter of the UN was to make sure that this didn’t happen again. The question now is whether the UN will stay the course. It doesn’t mean you have a kangaroo court. It means that you have a prosecutor consider the material that’s been produced by the CoI, gather any additional material that’s needed from the 36,000 refugees from North Korea that live in South Korea and elsewhere, and then consider putting it before independent judges of the ICC. It’s a matter of holding those charged with crimes against humanity accountable.

Q: Why did you request that North Korea retract its characterization of defectors as ‘human scum’?

North Korea has produced, as part of its so-called charm offensive, a report of its own on its human rights record. And in that report, it uses quite a lot of language which seems to us to be quite antique and resonant of the Cold War. Repeatedly, it has referred to the witnesses who came before the CoI as ‘human scum.’ Because we had a number of witnesses at the UN, and because we have relied substantially on these witnesses, I asked them to withdraw that statement. I also asked [the North Koreans] to release the report of the CoI to their own citizens, which they have never done. And I asked them to allow members of the CoI to come to [the North Korean capital] Pyongyang to debate the issues, answer questions, defend our findings and justify them in front of the people of North Korea. The CoI would still be willing to do that, but North Korea does not permit it. Until they do, my own view is that we should welcome the steps that they are taking in the right direction, but the UN should continue to insist on accountability and the most efficient way to get that is before the International Criminal Court, which requires a referral by the Security Council.