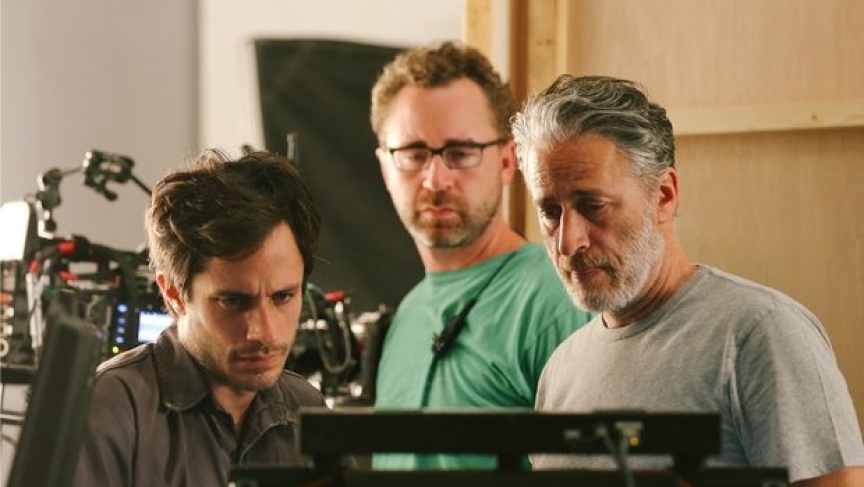 Jon Stewart works on the set of Rosewater, with Gael García Bernal and Michael Burke.

Since the turn of this century, no other venue for satire has had more influence on the way Americans think about news and the news business than The Daily Show with Jon Stewart. And part of its genius is how it brilliantly rides the very fine and very blurry line between comedy and reality.

But in 2009, things got a little too real. Stewart's show aired a series of segments produced in Tehran at the time of the rigged Iranian election and resulting protests. One of those stories featured the Iranian-Canadian journalist Maziar Bahari. Shortly after the piece aired, Bahari was arrested and accused of colluding with American spies and being a spy himself. He was held, interrogated, beaten and threatened with death.

This went on for four months, until an international campaign eventually led to his release.

Bahari wrote a book about his experience and approached Jon Stewart about turning it into a film. “Because I had never done that before I said, ‘Of course I can.’” Stewart recalls. “So we began the process together: two idiots with no Hollywood experience, and no money.”

Stewart wrote and directed the film, Rosewater, which stars Gael García Bernal as Bahari. Although the film focuses on Bahari’s detention, Stewart says just as important was the exploration of his captors, men who didn’t relish the profession of interrogation: “It’s very easy to dismiss this all as the one-dimensional dance between monsters and victims, but it’s not.”

Stewart took several months off from The Daily Show to shoot the film in Jordan. Although he had never directed a film, Stewart’s TV background worked in his favor. “In terms of creating narrative in a visual medium, I didn’t feel like the process was alien,” he says. The pace of production, however, took some adjustment. “I’m very accustomed to television: an idiotic idea at 9 a.m. becomes a completed meal at 6 p.m., and you can forget about it.”

Even after 16 years at The Daily Show and with a feature film under his belt, Stewart admits, “I still think of myself as a stand-up. And I still do it.” For Stewart, all of his work is a variation on the act of writing a joke. “The writing of the joke is the molecular form of it. It’s the most basic, and then it’s building blocks.”

Stewart’s contract with The Daily Show is up for renewal next fall, and he’s reluctant to say what’s next. “It’s a bad thing to make a decision about your future while you’re in the middle of something arduous,” he says. But he knows The Daily Show is “not forever. It won’t be a place that I stay to the point that I feel like it’s perfunctory.”

This story is based on an interview that first aired on Studio 360 with Kurt Andersen.