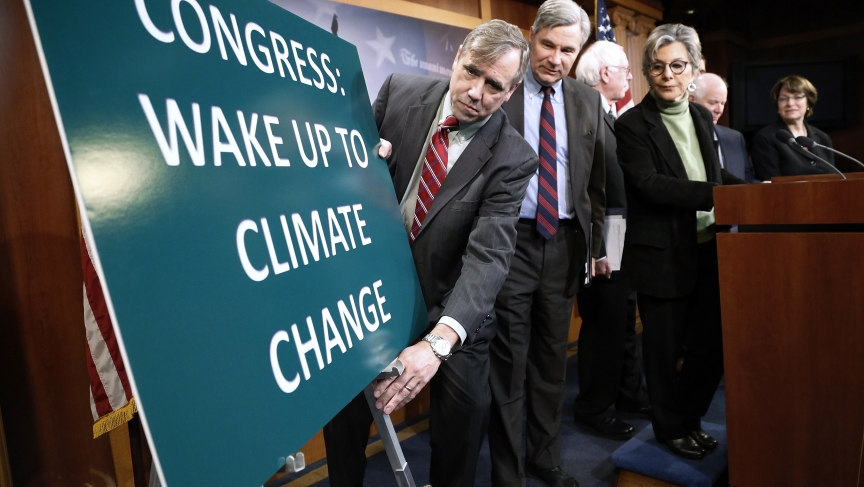 US Senator Jeff Merkley (D-Ore.) adjusts a sign at the start of a news conference led by Senator Barbara Boxer (D-Calif.) to draw attention to climate change in January 2014.

After a pummeling at the hands of Republicans during Tuesday's midterm elections, President Barack Obama says he heard the message from voters: "Get the job done." Just maybe not on climate change.

Obama mentioned it as a possible area of compromise with Republicans during a press conference on Wednesday, but there seems to be no short-term impetus to move.

That's because it's all about the long play, argues Elliot Diringer, the executive vice president The Center for Climate and Energy Solutions. Polls show a majority of Americans believe climate change is real, important and requires stronger action, he says, but it's still not a top priority as a campaign issue.

"When you ask them to rank the issues that are foremost in their minds, the climate — along with other environmental issues — is often toward the bottom of the list," he says. "It's just not yet front of mind."

Yet, less than two months ago, huge climate change rallies in New York and other cities around the world attracted record numbers. So where did all that enthusiasm go?

"I think the march, of course, was a good indication ... that there are lots of people growing increasingly concerned," Diringer says. "We saw a whole lot of initiatives and partnerships being announced at the [UN] climate summit in New York. All of those, I think, are indicators of a growing level of awareness and concern that over time will translate into stronger action. But this is going to take time."

That may be especially true now that Republicans control both houses of Congress. Sen. James Inhofe, the Oklahoma Republican set to take over the Senate Committee on Environment and Public Works, doesn't think climate change exists at all.

But Diringer says Inhofe is quickly becoming a minority. "One of the subtle shifts we've seen in the arguments of those opposing climate action over the last year or so is there are fewer who are outright denying the reality of climate change," he says. "Instead, you now hear politicians saying, 'Well, I'm not a scientist so I can't really speak authoritatively on that issue.'"

Diringer doesn't think the elections will ultimately change the issue of climate change in Washington. Obama is most likely to enact change via executive order, he thinks.

"The president remains committed to finalizing a rule to reduce greenhouse gasses from power plants, the largest source in the United States," Diringer says. "We may well see a heightened debate, more rhetoric, more administration officials being called up to Capitol Hill to explain themselves, but it doesn't really put the Congress in any better position to block the president's efforts."