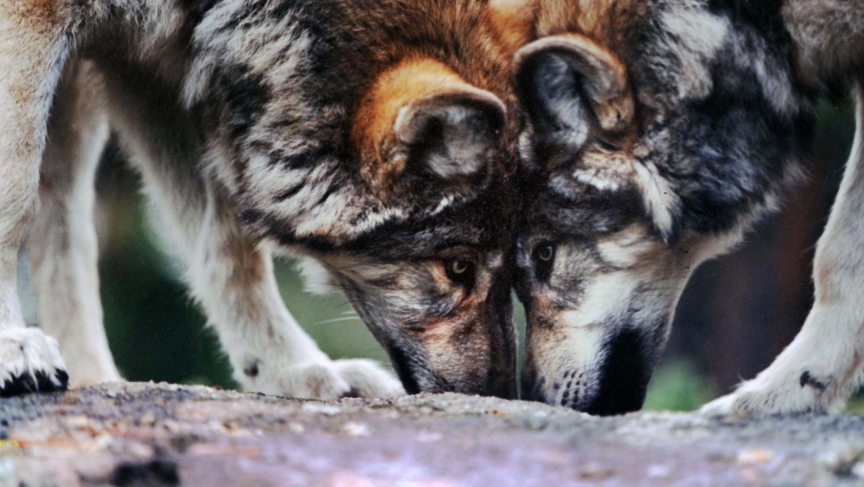 A pair of gray wolves in an undated file photo that were moved from the Red Feather Lakes, Colorado, wolf refuge, to a new refuge in northern New Jersey.

After years of systematic eradication by ranchers, the gray wolf was saved by the federal government in the 1990s. Authorities placed the wolf on the endangered species list and reintroduced it to the western US, creating a huge conservation success story.

The gray wolf population has bounced back across the northern Rocky Mountains, going from near-extinction to more than 1600 wolves by the end of 2012. But many people think the program's real legacy is one of political disaster, creating a divide among environmentalists, ranchers and elected officials.

When gray wolves were initially reintroduced, ranchers in the Yellowstone area — around the famous national park in Wyoming, Montana and Idaho — opposed the initiative after the wolves began preying on their livestock. While losses weren’t widespread, some ranchers did feel a serious impact.

“[It cost] $60,000 the first couple of years between the sheep we lost and the calves we lost,” rancher Jim Melin told Retro Report, a news site that produced a report on the controversy over the wolves. “Every time that those wolves come in here and take a part of my living away, that means I have to make it up somewhere else.”

Once the population began to bounce back, the US Fish and Wildlife Service believed the program's goals had been met. “The wolves were reintroduced in 1996, and by 2002, the population had bounced back to somewhere around twice the initial target numbers,” says Eric German, a producer at Retro Report.

But when the government tried to remove the gray wolf from the endangered species list, they triggered a flurry of lawsuits from environmentalists.

“They sued because they said the wolves weren’t breeding across geographical lines in the way that was specified in the plan,” German says. “They were concerned that if you turned the control back over to the states that the states would push for numbers right near the red line and there wouldn’t be a healthy population.”

Animals are usually only taken off the endangered species list when the Fish and Wildlife Service finds that the population has recovered, not because of Congress. Activist now fear their decision to push the government on the issue of gray wolves may have ultimately set a very bad precedent.

“[Environmentalists] are concerned that this has opened a door to a future where Congress could step in and start taking any politically inconvenient animal off of the endangered species list,” German says.

“I think we are all so busy stridently supporting our campaign that we didn't look at the bigger picture,” activist Lisa Upson told Retro Report. “And so all of a sudden it was like, ‘Wow, this could go very badly.' And it did."