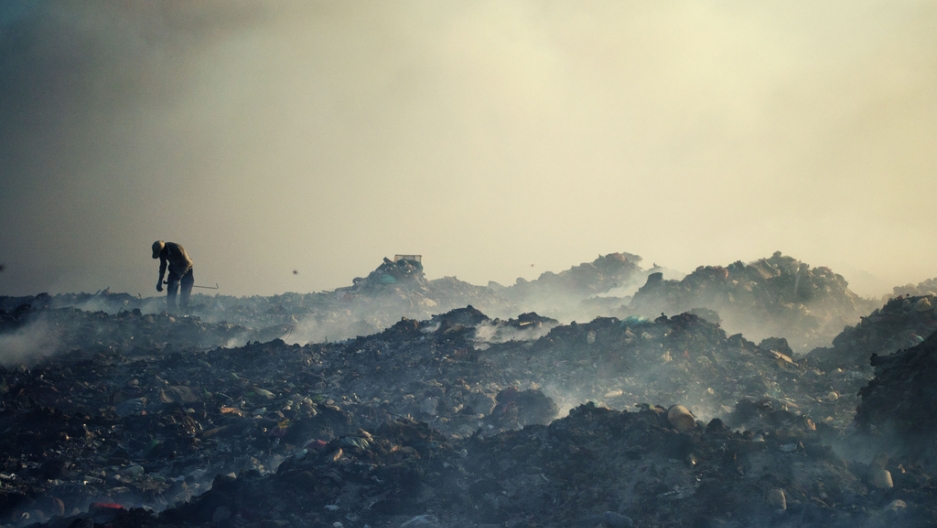 An immigrant laborer working in a landfill on Thilafushi, the island used for waste disposal in the Maldives.

Approximately one million tourists each year visit the Maldives, a tiny island nation south of India, for its sunny, warm weather and stunning natural beauty. But all those visitors, along with the country's 395,000 residents, are creating an ugly trash problem.

The government decided in December of 1991 to use one of its islands as the final destination for the huge amount of waste produced by the tourism industry. The country dug huge pits on a former lagoon named Thilafushi, which became known as "Rubbish Island." Waste was dumped into the middle of the pit, which was topped off with a layer of construction debris and then uniformly levelled with white sand.

Now an average of 330 tons of garbage are brought to Thilafushi every day, mostly from the capital, Malé. The island is also leased out for industrial activities like boat manufacturing, cement packing, methane gas bottling and large-scale warehousing.

The government temporarily banned dumping on the island in December 2011 after a major overflow of garbage drifted out to sea. But waste from Malé is still being sent to the island today.

Do you think Thilafushi is a mistake? Imagine the state of the rubbish in 20 yrs time? Can our sea be saved? pic.twitter.com/Mw7YXS17OS

Bluepeace, a local environmental organization, charges that used batteries, asbestos, lead and other potentially hazardous waste, mixed with the municipal solid waste from Malé, is seeping into the water and creating serious ecological and health problems in the Maldives. Mordy, an editor at collaborative travel project Atlas Obscura, describes the problem:

Commercial activity along with indiscriminate dumping has brought an abundance of toxic materials to the lagoon – broken oil drums, asbestos, lead, and other noxious metals mix in with daily household garbage items creating a noxious sludge. There is little around the island that goes unpolluted as harmful substances seep into the water and smoke from burning waste floods the air.

Alibeyya, a commenter on an article on local news site Minivan, pointed to the crux of the problem:

The delicate environment of Maldives is in need of a responsible waste management system. It is a big challenge given the geographical situation where each island including resorts must manage its own waste. [..] The resorts should be able to contain to get rid of their waste without having to dump to Thialfushi lagoon.

Waste management in the Maldives is reportedly hampered by local political disputes and lack of funding. After reports surfaced of illegal dumping in Thilafushi, management was transferred to the Malé city council in 2010 to clear up confusion about who held responsibility for the waste.

The council signed a contract in 2011 with the Indian-based company Tatva Global Renewable Energy to rehabilitate the island and manage the garbage problem. But the deal never was implemented because of bureaucracy and political interference. Now it has been cancelled, making the future of Thilafushi uncertain.

Abdullah Faraz writes in an opinion piece in Minivan News:

The first point to note is that underneath all the political rhetoric and maneuvering lies a real issue that affects many lives – the public health hazard, teachers and students being hospitalised, closing of schools, the smoke, the stench etc.

The public has a right to feel disaffected by this crisis, and is indignant and up in arms with good cause.

The second point to note is though this is a manufactured crisis; there is no inherent direction to which this raw emotional energy of the public may flow.

There is one certain development in the story: A new jail will be opened on Thilafushi in November.

This story by Rezwan Islam was originally published by our partner Global Voices Online, a community of bloggers from around the world. Additional reporting was provided by Saffah Faroog.