Mark Mothersbaughdevoted his early music career to writing intentionally odd and occasionally irritating music for his art-rock band Devo. Somehow he became one of Hollywood's most in-demand film composers, working with directors like Wes Anderson and scoring this year's mega hit The Lego Movie. But he tells Kurt Andersen that visual arthas been his passion since childhood. For years, Mothersbaugh has made collages, sculptures, daguerreotypes, and rugs. His favorite medium is the postcard-size drawing. "If it's three in the morning and I didn't do any drawings all day, I have to wake up and do it," he tells Kurt. In them, he combines hand-drawn sketches in India ink and watercolors with digitally-manipulated elements.

Mothersbaugh has executed a few of these little works every day for more than 40 years, and for the first time, all 30,000 hand-made postcards will be shown at a retrospective, Myopia, at the Museum of Contemporary Art in Denver. It's a long way from his start showing work in little pop-up galleries --- the kind where a handful of people show up at a warehouse. That kind of scene was perfect for Mothersbaugh, though. "I got to hang out with people who were still excited about art, the way Devo was in the early seventies," he says.

Mothersbaugh and his buddy Jerry Casale started Devoin the 1970's, while they were studying art at Kent State University. They would get up on stage in Akron, Ohio, dressed like space-age janitors with bizarre red plastic hats. Almost in spite of itself, Devo ended up with billboard hits like "Whip It" --- a song that succeeded because it fit the band's Dadaism into a catchy pop tune. That approach to making protest music came directly out of Mothersbaugh and Casale's experience witnessing the Kent State shootings. Open, defiant protest "was easy to put down," Mothersbaugh says. They saw pop culture and the power of advertising as much more potent models for getting a message across --- even if that message argued against consumerist culture. "We had come to believe that subversion was the only way to affect change in this country."

So, aside from composing for Hollywood, he also scores commercialsfor companies like Lexus, Hershey's, Nike, and McDonald's. Mothersbaugh says he used to put subliminal messages in his early work: "Sugar is bad for you," for instance, in a Mountain Dew ad. He found that his corporate clients didn't even notice the needling. "People heard what they wanted to hear." 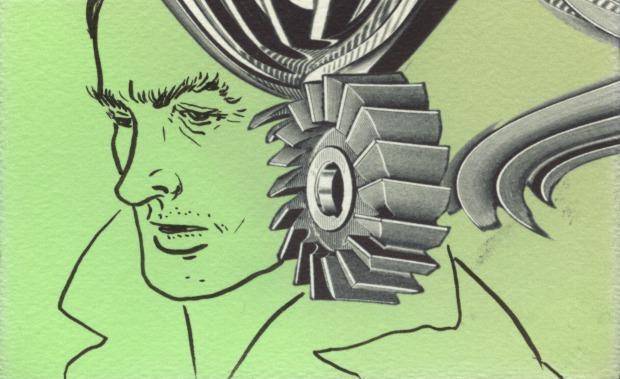 Mark Mothersbaugh has created a postcard illustration every day for the past 30 years. He brought a card painted that day to his interview with Kurt.
(Mark Mothersbaugh) 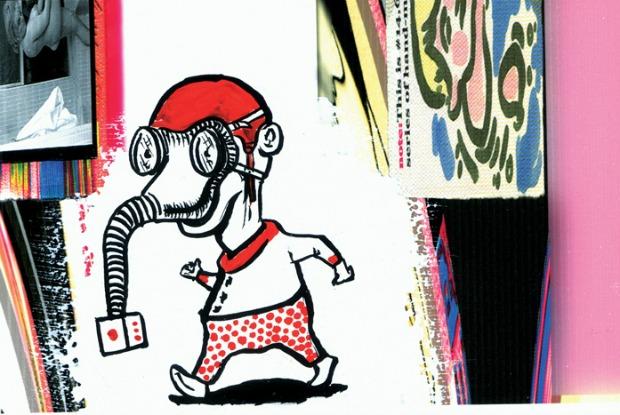 Mothersbaugh will show thirty-thousand postcards in an upcoming exhibit, Myopia, at the Museum of Contemporary Art Denver.
(From Mark Mothersbaugh: Myopia, courtesy of Princeton Architectural Press) 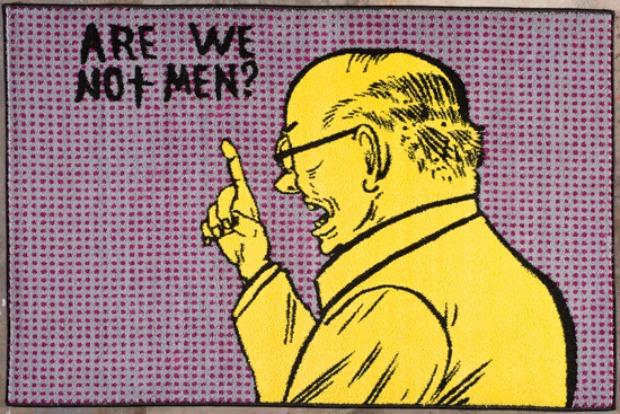 "Are We Not Men?," 2004
A rug designed by Mothersbaugh. He says he started making rugs because "it was so much nicer than a piece of paper I'd have to frame and put plastic over."
(From Mark Mothersbaugh: Myopia, courtesy of Princeton Architectural Press)