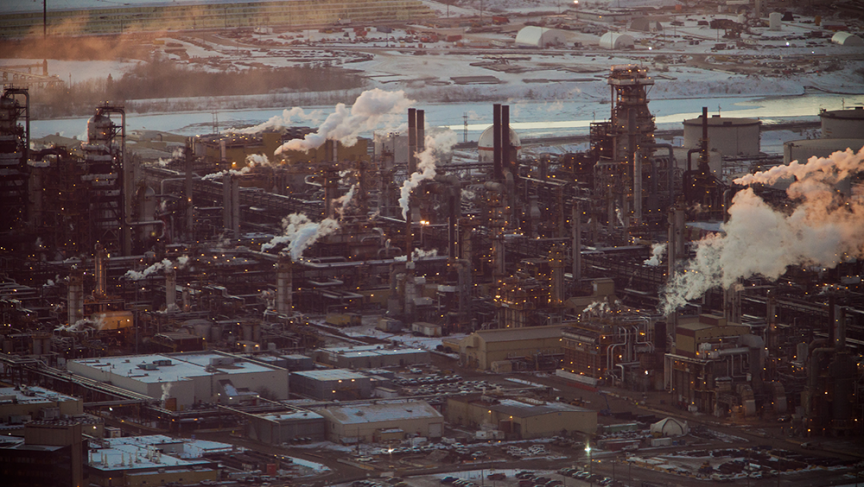 Uncertainly over the Keystone XL pipeline and a slump in oil prices are prompting several big companies to halt plans to extract oil from the Alberta tar sands.

The latest company to pull out of the tar sands is Norwegian oil giant Statoil. But just in the last year, Shell, the French energy company Total, and SunCor Energy of Canada have all cancelled tar sands projects.

Brian Palmer, a writer for OnEarth Magazine (a publication of the Natural Resources Defense Council), says there are a variety of factors behind these decisions, but the main reason is the uncertainty surrounding the Keystone XL pipeline.

Because tar sands oil is a much lower-quality version of crude oil, it sells at $20 to $30 dollars less than conventional crude. With conventional crude oil now selling for about $80 a barrel, the price of tar sands oil has fallen to around $60 a barrel. It also costs about $25 per barrel to move tar sands crude by rail from Alberta to the Gulf of Mexico, Palmer says. The Keystone Pipeline would cut that transportation price from $25 to $9 a barrel, which is why oil companies are so eager to see the pipeline move forward.

If the price of tar sands oil continues to drop, and companies have to pay that extra $15 to $20 for oil-by-rail indefinitely, then suddenly the long-term viability of tar sands project looks very dubious, Palmer says.

A couple of years ago, most energy executives thought the Keystone pipeline was being postponed for political reasons and would be approved once election season ended. “[But] environmentalists have been so successful in postponing the pipeline that a lot of oil companies are now worried that it's never going to happen,” Palmer says. “And if it's never going to happen, making a long-term commitment to a tar sands project is a kind of iffy proposition.”

That's partly because of the enormous upfront expense of these projects. Extracting oil from tar sands is nothing like drilling for oil — it's much more like mining, Palmer explains. “You need to move huge amounts of equipment to a very remote place in northern Canada to get the tar sands out of the ground. You need additional equipment to separate the bitumen — the stuff that actually makes oil — from the sand and clay. Then you need even more equipment to cook that down and turn it into something that vaguely resembles crude oil. When all of that is done, you still have to get the stuff to a refinery.”

Oil companies and some politicians in Canada are pushing for two other pipelines that would eliminate the need for the Keystone pipeline through the US to the Gulf of Mexico. “The Energy East pipeline is sort of a Canadian version of Keystone XL, and it's getting the same reaction in Canada that Keystone XL got in the United States,” Palmer says. “Once it became a serious issue, lots of Canadian environmental groups started raising a fuss about it — for good reason.”

Another proposal is a pipeline called the Alberta Clipper, which would carry oil to Superior, Wisconsin. That's going nowhere, Palmer says. So, with barely enough rail capacity to handle the tar sand oil they already have, the idea of expanding the industry seems like a complete nonstarter right now.

“The issue is not expansion up until now. It's future expansions,” Palmer says. “If you're an oil executive and you want to invest in a project that's going to take 30 years, but you have no reason to believe it's ever going to become profitable because you don't have a pipeline, you're going to have a hard time convincing your shareholders that's a good idea.”