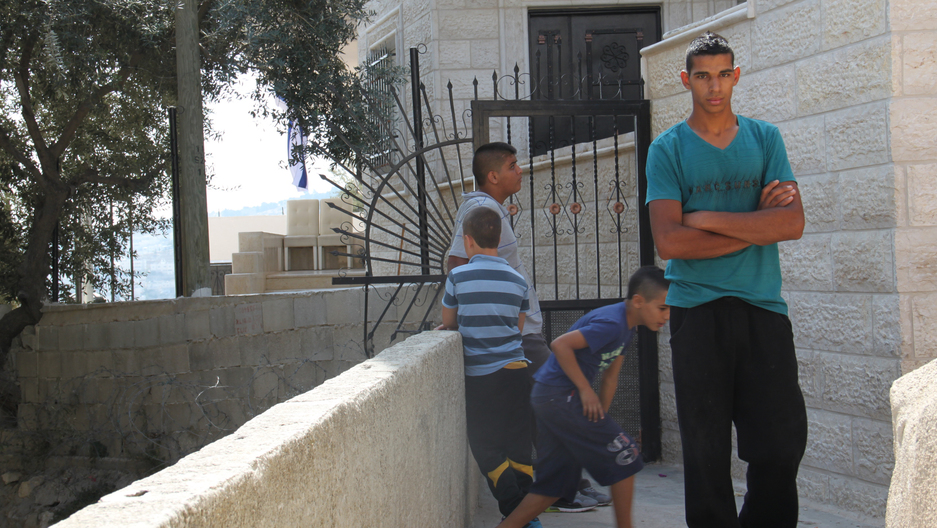 Palestinian residents stand in front of a Baydoun home recently occupied by Israelis.

In the Israeli-Palestinian war over the character of Jerusalem, the neighborhood of Silwan is a major battlefield.

The City of David archaeological park is a popular destination for most visitors to the area. There’s soft harp music and a golden harp statue at the entrance, where tour guides meet groups and shepherd them through the ruins.

It’s the most ancient part of Jerusalem, and it’s where Jewish tradition says the biblical King David established his capital.

The Israeli non-profit Elad, which established this archaeological park, also began buying up Palestinian homes in the neighborhood two decades ago. The goal: to make the area majority Jewish.

When 25 apartments here were occupied in the middle of the night last week by Israeli guards, White House spokesman Josh Earnest expressed disapproval of the settlement organization.

“These provocative acts, these acts by this organization, only serves to escalate tensions at a moment when those tensions have already been high,” Earnest said.

Israeli Prime Minister Benjamin Netanyahu told CBS’ Face the Nation that he was baffled by the criticism.

“Some Jewish residents of Jerusalem bought apartments legally from Arabs in a predominantly Arab neighborhood,” Netanyahu said. “And this is seen as a terrible thing.”

The White House says a settlement organization bought the homes; the Israeli Prime Minister says it was Jewish residents of Jerusalem. So who actually bought these homes? And who sold them?

This is where things start to get shady.

Ask around the neighborhood, and people mention one name: Farid Hajj Yehiya.

Residents say this man bought up many of the apartments that were later taken over by Jews. One woman, Umm Anan Beydoun, says Yehiya came knocking a few months ago to make a proposal to her son.

He introduced himself as the head of an Islamic charity and said he wanted to buy one of the family’s properties with the intention to turn it into a hostel for Muslims around the world coming to Jerusalem.

The son liked the idea, and in July, he sold it to the man. Next thing they knew, armed Israeli guards had entered the building. Now a large Israeli flag hangs near the door.

On a recent visit, people peered down from the roof and then disappeared. Then a woman came out of the building.

She said no one was living there; she was just doing some maintenance. Until Jewish families move in, armed Israeli men are inside the homes, guarding them.

The Elad settlement said it did not purchase the 25 apartments, but rather a private American real estate investment company called Kendall Finance did. An Israeli lawyer for the company said it will be renting them out.

What is Kendall Finance? Who owns it? Where in the US is it based? The lawyer didn’t respond to questions about the company’s identity. An Internet search yields nothing.

So I called Farid Hajj Yihyeh and asked him if it was true what residents are saying, that he bought the apartments in question.

“It’s not true,” he told me. “Basically, I have purchased one apartment and that was months ago.”

I asked him about the Beydoun family’s apartment, and another home, too. He changed his tune. He said he bought six apartments, not one.

So how did the apartments become occupied by Jews?

Yihyeh said he sold the apartments to another Muslim man, and that the Beydoun’s son sold the family’s property secretly without telling his parents. He also said that the Beydoun's son and others must have sold the homes to Jewish settlers years ago and tricked him.

He denied he was a secret broker on behalf of Jewish settlers, but his explanations kept shifting. “Something is fake here,” Yehiya said.

Thursday in Silwan, a man whose family’s home was sold to Jewish settlers was knifed to death by relatives in the middle of the street, under unclear motives.

Bushra Mohammed Adel Khayyat, whose apartment was also occupied last week by Israeli guards, says she and her father fled the neighborhood, and her aunt advised her to stay away.

Khayyat said her father sold the apartment to Yihiya and would never do so if he knew it would be occupied by Israelis.

But a neighborhood activist in the street said he’s certain Bushra’s father sold his property knowing it would end up in Jewish hands. The neighborhood is planning to publish a list of all the culprits when residents gather the evidence, he warned.

The battle to create a Jewish majority in Silwan has created another battle — pitting suspicious Palestinian neighbors against each other.