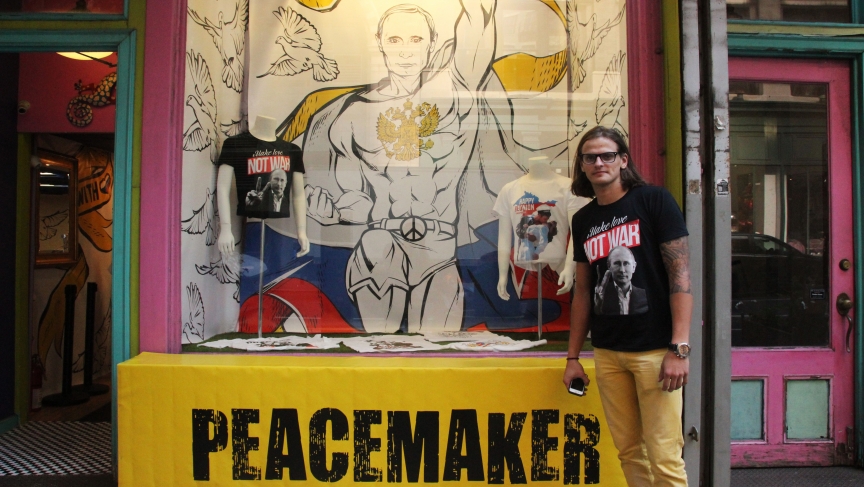 Julius Kacinskis outside of “Peacemaker,” the pop-up shop on East 20th Street in Manhattan where he sells Vladimir Putin t-shirts that he designed. “People portray Putin as a mean guy,” Kacinskis says, “so we gotta educate people."

“We’re here probably through this weekend, and then after the weekend we’ll see how it is and probably extend it another week,” says Julius Kacinskis of Peacemaker, a small shop that popped up on Tuesday — Vladimir Putin’s birthday.

Peacemaker carries a handful of T-shirts with designs suggesting a peaceful and heroic side of the Russian president.

“The Peacemaker, which is our logo — it’s just Vladimir Putin in a Superman outfit," Kacinskis says. "The cape is the Russian flag; instead of the Superman belt with the S we have the peace sign with the doves behind it.”

Two other designs have a black-and-white photograph of Putin smiling, fingers raised in a peace sign. The fingers may have been Photoshopped in. One of them has a banner that says “All you need is peace.” The other says “Make love not war.”

There's one that's apparently especially popular with the ladies, too. "It’s Vladimir Putin portrayed as Clark Kent: suit by day, superhero by night," Kacinskis says. "So, ‘Peacemaker in real life’ is our catch phrase with that shirt."

Kacinskis designed all of this pro-Putin agitprop, and he seems mostly serious about it. He describes the venture as half business, half education — he says he wants to change the image a lot of people have of the Russian leader.

“The Western media portrays him as a different ... that super-aggressive guy," Kacinskis says. "We’re trying to take away from that. We’re trying to promote peace — promote peace between the two countries kind of thing you know? We’re two superpowers, why can’t we get along?” 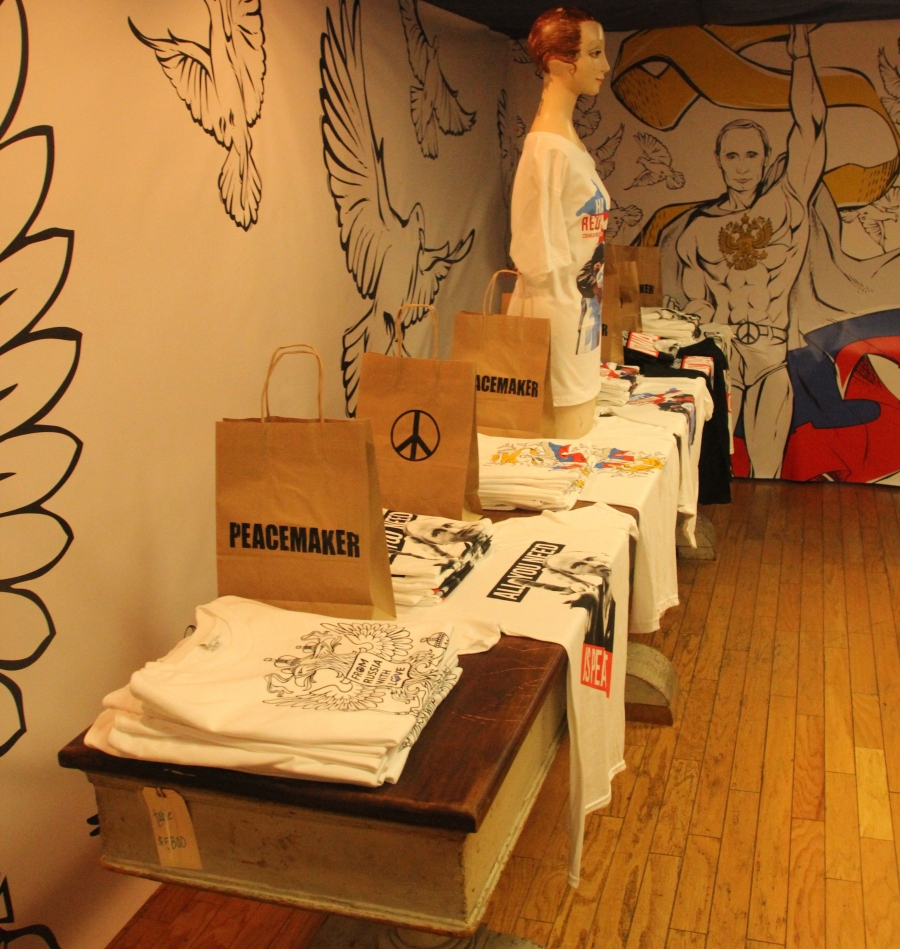 T-Shirts at Kacinskis’s pop-up shop include ones that say “From Russia With Love” with peace and heart symbols replacing the Os, “Make Love Not War,” and “All We Need Is Peace.”

Kacinskis is originally from Lithuania; he moved to the US 13 years ago. He has family in Russia, and lots of Russian-American friends here. On the day his store opened it was featured on the nightly news in Russia, and word quickly got back to New York.

One shopper, Anna Ivlieva says she saw Kacinskis on the news and thanked him for what she called a "great initiative." Normally, she says, she's sheepish about sharing her views too widely.

“Every time when I talk to my friends and my colleagues that I’m kind of pro-Putin, I get that real look like ‘Really? He’s an asshole. He’s like Putler or whatever. It’s bad man,” she says.

She purchases one of the "Make Love Not War" shirts for herself, but asks Kacinskis and his co-worker if they think it’s safe to wear the shirt. “It’s New York," Kacinskis says. "You can wear whatever you want in New York."

And, this being New York, some folks were getting the shirts ironically. I ask one guy in the store if he's a T-shirt fan or a Putin fan. "I’m a let’s-make-fun-of-this-guy-as-much-as-possible fan," he says, laughing.

At lunchtime, a man who calls himself Michael wanders in with some colleagues and grabs a shirt for another co-worker.

“Mikhail — his name’s Mikhail," Michael says of his co-worker. "He sounds Russian, but he’s actually Swedish. He’s a big fan of Putin. He also likes to ride around with his shirt off, so we figured we don’t like to see him with his shirt off. We figured we’d get him one of these T-shirts.”

Michael, who says he's not a fan of Putin, asks Kacinskis why he's hawking Putin tees. “How about ISIS T-shirts?" Michael asks. "You should do Putin T-shirts, ISIS T-shirts, and Ebola T-shirts, then you’d have all the bases covered.”

Kacinskis just shrugs it off. "That guy had a great sense of humor," he says gamely, as Michael and his friends depart.