If geometry is a language, then Euclid'sElementslays out its alphabet and dictates the rules for how the letters relate each other. (It's sort of the math equivalent of "I before E except after C.") The 13 volumesof Elementswere written some 2,400 years ago. Euclid was one of the greatest mathematical thinkers, but readability wasn't his thing: his ideas unfold in dense blocks of text with only an occasional diagram.

A couple thousandyears later, Oliver Byrne,a mathematician in England, reimagined the classic text. The First Six Books of The Elements of Euclid (1847) combines text and woodblock-printed shapes in blue, red, and yellow that elegantly snap together, like magna-tiles. He replaces words like "circle" or "square" with the shapes they represent.It's typography bonded with science and graphic design. For the first time, a student could see the math, using both eyes and mind to followthat logical march from assumption to proof. 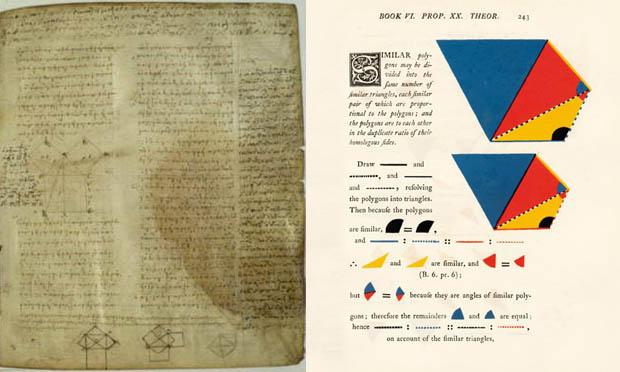 But this gorgeous specimen of Victorian printing didn't come cheap. Dozens of printing plates had to be meticulously aligned to create the chromatic riot of tiny shapes on every page, which made it hideously expensive -- so much so that the printing may have caused its publisher's bankruptcy. Adding insult to calamity, critics tore intoByrne's use of color and symbolism, calling him a "curiosity" and saying that his geometric systems approached theology.

See more of the images below.

It wasn't until the early 2000s that Byrne finally had his day, gaining recognition not among mathematicians but design writers. TheycalledByrne's workprescientin the way it embodiesthe Bauhaus and De Stijl movements, which came decadeslater. His pages began showing up in books about information design and art, praised by Edward Tufte in the influential Envisioning Information. Steven Heller wrote that he briefly considered mortgaging his house, kids, and dog to acquire anoriginal edition, which cost tens of thousands of dollars at the time.Luckily for the kids and the dog, the German publisher Taschen recreated Byrne's masterwork in 2010. (It was reprinted last year.)

And yet this admiration from designers might have Byrne rolling over in his grave. In his preface to the book, he proclaimed that it had "a greater aim than mere illustration; we do not introduce colours for the purpose of entertainment, or to amuse by certain combinations of tint and form, but to assist the mind in its researches after truth." 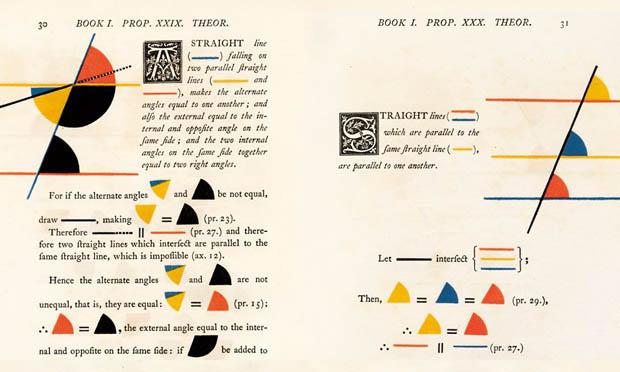 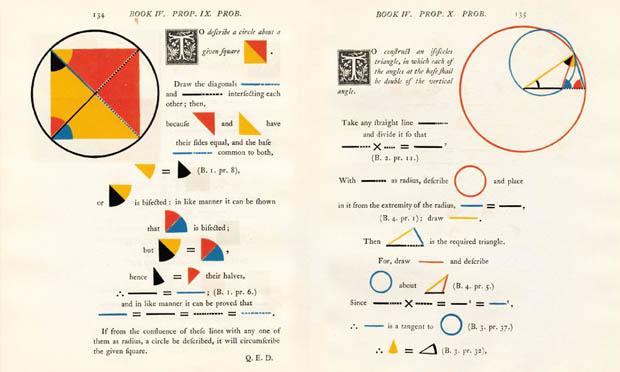 Euclidean theorem: Circumscribing a circle about a given square.
(Taschen) 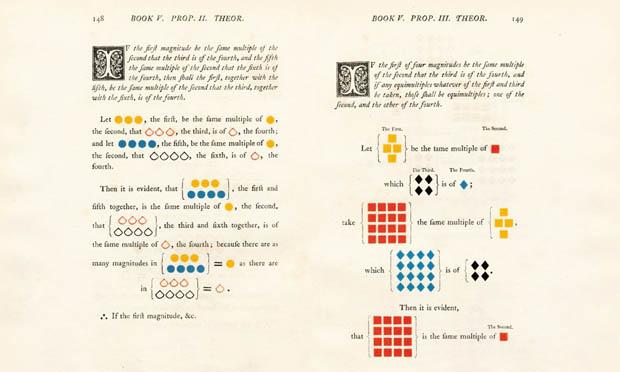