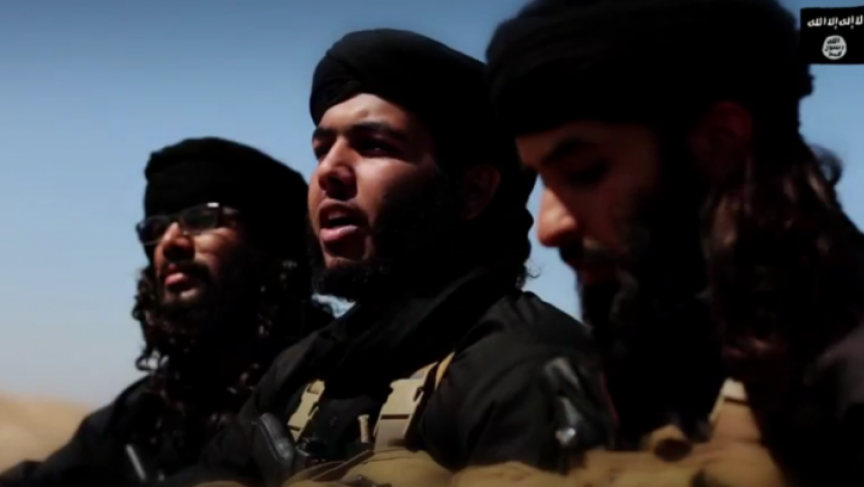 A screenshot from a video released by four Bahraini men calling on their Sunni countrymen to take up arms against the country's ruling family and Shiite majority.
Credit:

Four Bahrainis who joined the militant group ISIS have called on their Sunni countrymen to take up arms and fight both the country's ruling “tyrants," the Khalifa royal family, and the country's Shiite majority.

The men made their announcement in a YouTube video that surfaced on social media and recently went viral. PRI and Global Voices will not republish the video so as not to further spread ISIS propaganda and hate speech.

The Bahrainis in the video are just some of thousands of young men and men from around the world who have been attracted to fight with ISIS, the al-Qaeda breakaway group in Iraq and Syria. But while most have gone to those countries to fight, the YouTube video has raised alarm for its calls for violence in Bahrain itself.

The viral video focused on four major points: calling on the armed forces to defect; calling for more Sunnis to join the jihad in Iraq and Syria; urging Sunnis to refuse working with Shiites in the public or private sectors in Bahrains; and calling for a boycott of upcoming elections.

One of the men who appeared in the video is Lt. Mohamed Isa al-Binali, whose defection from the Bahrain Defence Forces was reported on Global Voices earlier this year.

Binali graduated from the police academy in 2013 and was supposed to be a prison guard in Bahrain's infamous prisons, which have practiced systematic torture since 2011. Bahrain's Ministry of Interior issued a statement saying he was sacked from his job because of his absence earlier this month. According to Arabic-language news reports, Binali had been in the ranks of ISIS for over four months.

His family, the Binali clan, is a famous one in Bahrain that's closely affiliated with the ruling al-Khalifa regime. The family also has longstanding ties to ISIS. At least one family member, named Ali Yousif, has reportedly died fighting for the group.

The man who tweeted news of Ali Yousif's death is Binali's cousin, Turki al-Binali, who goes by the alias Abu Sufyan al-Salami. He is a high-ranking preacher in ISIS who was arrested and released many times in Bahrain before taking his public position in the terrorist organization.

Despite those terrorism links, Abu Sufyan has seemingly avoided govenrment supression. His books can still be found in libraries and bookshops around Bahrain, which bans hundreds of websites which oppose the government. And in 2012, a protest he led in front of the American Embassy in Bahrain was not attacked by the authorities, unlike many opposition protests.

The ISIS threat against Bahrain coincides with similar messages to neighbouring countries, which also have turned a blind eye to the group, allowing it to fester and grow in ranks on their own soil. Mauritanian blogger Nasser Weddady recently tweeted one such extremist call to other Gulf countries:

Many people feel that the Bahraini government has turned a blind eye to the rise of ISIS sympathizers in the country. Prominent human rights activist Nabeel Rajab doesn't mince his words. His message is clear:

In contrast to that apparent restraint, Bahrain has dealt harshly with its Shiite majority, who complain of decades-long marginalization under the Sunni ruling family. In a response to a popular uprising in February 2011, “the Bahraini regime responded not only with violent force, but also by encouraging a nasty sectarianism in order to divide the popular movement and to build domestic and regional support for a crackdown,” wrote Mark Lynch at Foreign Policy.

While Bahrain has joined the coalition in its airstrikes on ISIS in Iraq and Syria, the environment of discrimination at home couldn't be any worse. As Rajab explains:

Now that this video is out, with a clear message targeting sympathetic ears in some circles in Bahrain, the question is how the Bahrain regime deals with real terrorism from people within its ranks.

This story by Noor Mattar was originally published by our partner Global Voices Online, a community of bloggers from aroujnd the world.