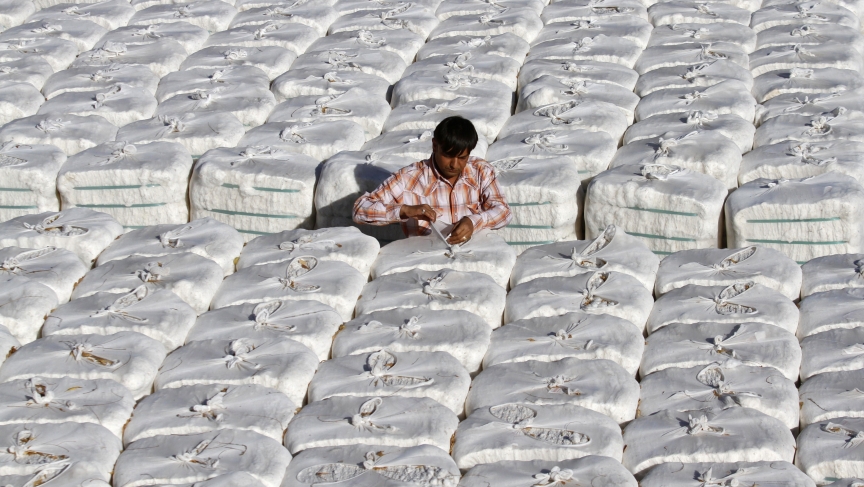 A trader checks stacked boxes of cotton before loading them onto a truck inside a cotton processing unit in Kadi near the western Indian city of Ahmedabad.
Credit:

No topic seems to inspire more debate than genetically modified organisms. Should genetic modifications be used to makes crops live longer, resist pests and drought and yield more harvest? Or are GMOs dangerous for the planet and its residents?

“The conversation ... around GMOs, in many ways, has become a distraction to the real issues and challenges and conversations we should be having around food security,” says Dr. Robert Fraley, the chief technology officer of Monsanto, a multinational agriculture corporation that's long been at the center of the GMO debate. “As important as GMO technology has been, it’s only one tool in an arsenal of many tools that farmers will need. 'How do we double the amount of food between now and 2050?' is really where the conversation should be focused.”

But while feeding a hungry planet may seem like a noble cause, Dr. Vandana Shiva contends that Monsanto’s argument is the stuff of fiction. Shiva is an activist and the founder of Navdanya, a movement of 500,000 seed keepers and organic farmers in India. She says the introduction of pesticidal toxins and herbicide tolerance in crops has had the opposite effect.

Farley says that those who oppose GMOs misunderstand the science behind it, comparing critics to those who are against childhood vaccinations.

“In a broad sense, every new technology has its detractors,” he says. “We’ve seen some folks in the area of human health who don’t believe in the science of vaccines, and there is a whole Internet rumor mill that is not grounded in science or based in scientific fact. As a result, today we have folks who are getting diseases that should have been eradicated decades ago.”

The World Trade Organization says that India is one of the biggest producers of cotton, and Monsanto claims it’s helped the nation achieve that status through widespread adoption of GMO crops.

“It’s given farmers, cotton farmers, higher yields, and it’s also dramatically reduced their pesticide use," Farley says. "And this year, India, because of its adoption of the technology, will become the largest cotton producer in the world and Indian farmers are enjoying a level of income and sustainability that they have never seen before.”

But Shiva says that claim is false. She argues these technologies have actually led to a decline in yields because "superpests" and "superweeds" — ones resistant to pesticides — are now overtaking India’s agriculture. She adds that increases in Indian cotton production have more to do with geopolitics than Monsanto’s technology.

“The success is actually the removal of the subsidy distortions,” she says, referring to action taken by the WTO against American subsidies for cotton farmers. Until a 2004 ruling by the global body, about 25,000 American cotton farmers controlled more than 40 percent of international cotton exports — and averaged about $3 billion a year in taxpayer support.

Shiva also points to increased amounts of land under cultivation. "India produced more rice and wheat, but we increased acreage of rice and wheat," she says. "We have shown that the land and irrigation explain these increases in production. The idea of miracle seeds and chemicals — and now miracle GMOs — is covering up the real roots of the production increases.”

While the true roots of India’s cotton success can be closely dissected and debated, one thing remains constant: Some 805 million people in the world do not have enough food to lead a healthy, active life, according to the United Nation’s World Food Program. Globally, poor nutrition causes 45 percent of deaths in children under 5-years-old — about 3.1 million children each year.

Monsanto says its technology has the power to change that.

“There is a very beneficial technology in rice called Golden Rice, and that’s being developed by IRRI — the International Rice Research Institute,” Fraley says. “In diets, particularly in Asia and Africa, which are poor in Vitamin A, young children develop eye problems and night blindness."

Fraley says a cup of day of Golden Rice can alleviate the problem, and says that that activists "are creating a needless barrier" by resisting trials of the crop. But Shiva rejects even this model, saying that there are other, more natural ways for people to get nutrition.

“My critique of golden rice is twofold," she says. "First, that it promotes the monocultures that are at the heart of the malnutrition problem, because if you grow diversity, you don't have deficiency problems in minerals, trace elements, and micronutrients." She also says plants grown in diverse environments are shown to have higher Vitamin A levels. "So just give every woman a kitchen garden, and you've solved the Vitamin A problem.”

This story is based on interviews that originally aired on PRI's The Takeaway, a public radio program that invites you to be part of the American conversation.