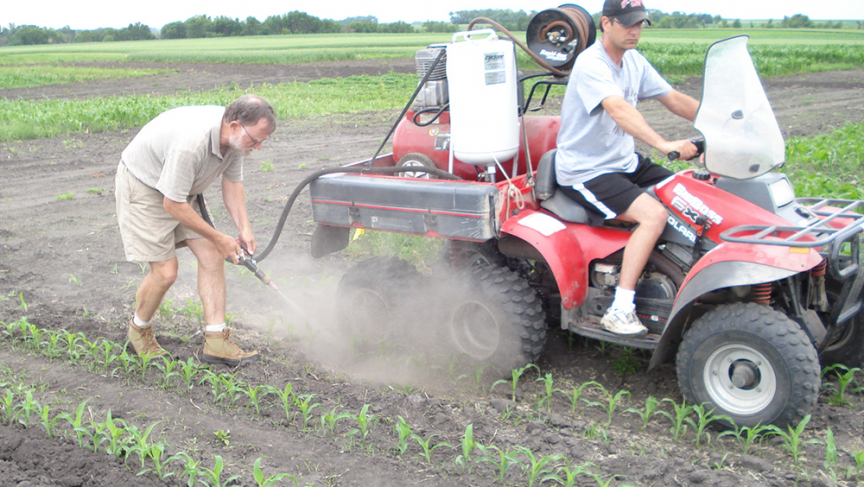 Jim Eklund and Frank Forcella conduct an early test of the concept with a single-nozzle blaster. Jim is driving the ATV and Frank is applying the grit.
Credit:

Great ideas often have very modest beginnings. But who would have guessed that a promising new weed management technology for organic farms would begin with a bucket of apricot pits?

Frank Forcella, an agronomist with the USDA’s North Central Soil Conservation Research Laboratory, grows apricots as a hobby on his farm in Minnesota. 2007 was a wonderful year for apricot production in Minnesota, Forcella says, and he ended up with about a five gallon bucket full of apricot pits. He started wondering if there was something he could do with them.

“One of the things you can do with them is to grind them up and use them as a grit in sandblasters,” Forcella says. He mentioned this to a colleague, Dean Peterson, on their way out to their fields one day. Then, they “more or less simultaneously had the same idea: ‘I wonder if you could use sandblasters to kill weeds.’”

Initially, they thought "this had to be the dumbest idea in the world" — but they just couldn't get it out of their heads. It was their light bulb moment, Forcella says.

But then they “dimmed the light bulb for a while,” believing that a sandblaster would be prohibitively expensive. Wrong.

“As it turns out, you can buy a very cheap sandblaster for about $50, so we invested in one of those,” Forcella says. The light bulb was back on.

They began experimenting in their local greenhouse, putting some weeds and a corn plant in pots. When the corn plant was about six inches tall and the weeds were one to three inches tall, they hit the weeds with “split-second applications of walnut shell grit.” It worked. “The weeds would simply disappear and the corn plant remained intact,” Forcella says.

They decided to try it out in the field. Using a bigger sandblaster mounted on an ATV, they began blasting small weed seedlings that were growing alongside corn plants. Because the spray pattern of the sandblaster was so narrow, they were again able to destroy the weeds without damaging the plant.

“We get a pattern about three to four inches wide on either side of the crop row, as well as in the crop row itself — but we're not actually applying the grit to the crop plant,” Forcella explains. “Very little damage is done to the crop plant, but the small weeds growing alongside it are more or less obliterated.”

This new system of weed control could be a huge help to organic farmers. “Weeds are one of the most contentious issues for organic farmers,” Forcella says. “They have very few other tools in their toolboxes that they can use for weed control, so they are desperate for alternative forms of weed management.”

Tools organic farmers currently use, like plowing, tilling and disking, are all considered organic. But they also create soil disturbance, which has environmental consequences like soil erosion and CO2 loss.

Forcella has refined his technique by consulting with organic farmers. Some suggested adding a gritty material to organically-approved fertilizers, allowing them to control weeds and fertilize crops at the same time. “Corn gluten meal, for example, which is very rich in nitrogen, has a gritty texture and it works just fine as a grit for weed control,” Forcella says.

Crushed limestone is another good possibility. “Almost every farmer who has acidic soils has to add limestone to their soil,” Forcella says. “If they're going to do that, they might as well use it in a gritty form and apply it to control weeds.”

So far, Forcella and his partner have used this new technique on corn and soybeans with good results. Another colleague, Sam Wortman, has used it successfully on tomato plants.

Now, the big barrier to developing that success into wider use is money. “It may cost $100 or more per acre for weed control,” Forcella says. “That seems expensive, but if you consider that we can use organically approved fertilizers as a grit for weed control, that reduces the cost immensely.”

Forcella now has collaborators in Spain and at the University of California-Davis who are trying to develop a more efficient method of applying the material — not just in vegetable crops, but in vineyards and olive orchards as well. One idea for improvements is using GPS units to get a more precise application of the grit.

Forcella is pleased with how far his modest idea has come. Riding an ATV out in the fields of Minnesota was fun, but now his plan is getting even better.

“The National Institute of Food and Agriculture has just funded another grant; the Spanish government has funded yet another project — all along these lines," he says. "We think it's starting to snowball, and we are very encouraged."