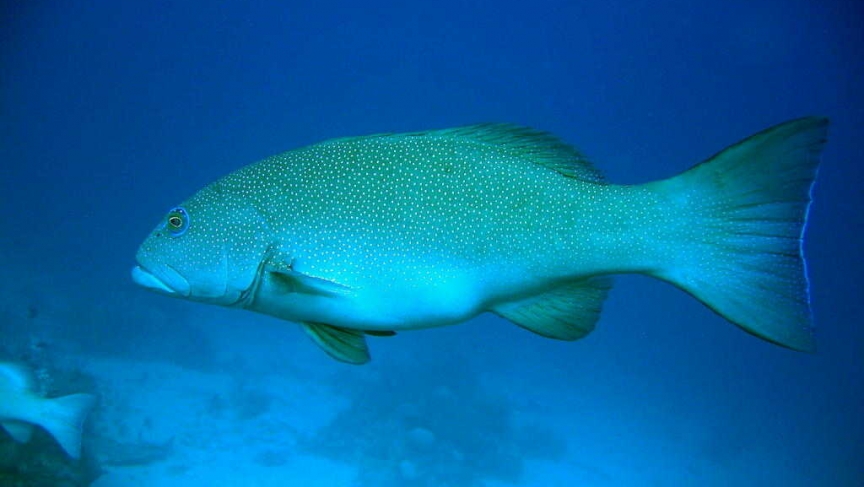 Coral trout are proving to be smarter than we ever gave them credit for.
Credit:

Researchers already knew that coral trout, which live around reefs and eat other fish, would sometimes enlist the help of a moray eel. The eel could enter openings in the coral that were too small for the trout and help flush out prey. The fish would use their bodies to show the eels where their prey was hiding. That finding was already pretty astounding for a small-brained fish.

Now, British and Swiss researchers have evidence of even more sophisticated thinking. They tested coral trout in an aquarium using a bait fish and moray eel models that could be moved like real eels. When they put the bait fish in a container that required an eel’s help, the trout sought help. That was expected. Then the researchers controlled different eel models so that some seemed good at chasing out fish and others were sluggish at it. Soon the trout learned the difference and only sought help from the better prey-chasing eels — a level of behavior only observed so far in humans and chimps.

Wired magazine reports that the researchers have no clue if the fish think like we do about cooperation, but one noted that "evidence is mounting that fish have more going on in their heads in terms of cognition than they have been given credit for.”

Several African states have passed tough new laws punishing people convicted of homosexuality. Gambia is about to be added to the list. A bill that was passed last month by the country's parliament would send those convicted of "aggravated homosexuality" to prison, for life. The measure passed with nearly unanimous support — just two people voted against it. The bill now goes to Gambian President Yahya Jammeh to be signed.

Homosexuality was already a crime in the country, punishable by up to 14 years in prison, Slate reports. But this new law seeks to target “repeat offenders and people living with HIV/AIDS,” according to one of the country's lawmakers. It's all but certain Jammeh will sign the bill. When he came to power in a coup in the 1990s, he declared that homosexuality would never be tolerated and would, in fact, "meet the ultimate penalty."

The ancient blue whales are coming back

Blue whales are bigger than dinosaurs and still swim the world's oceans, though 20th-century whaling nearly killed them off. Thousands of the creatures were hunted, especially in the waters off Antarctica. Many off the coast of the US were also killed, but it's that population, the northeastern Pacific Ocean blue whales, that have made a remarkable recovery thanks to international laws prohibiting whaling.

According to researchers, the whales — which range from the coast of Alaska to the coast of Mexico — are back to nearly 100 percent of their pre-whaling population. Still, blue whales in other parts of the world remain endangered. All told, the blue whale population is perhaps just 10 percent of what it once was. But scientists are celebrating this milestone with the Pacific population as a sign of what's possible with time and attention. PRI's The World has the story.

Ebola is hard on the patients and the doctors

Benjamin Black is an obstetrician who usually busies himself with delivering babies and treating issues with the female reproductive system. He volunteered with Medecins Sans Frontieres, or Doctors Without Borders, and has been living and working in Sierra Leone, tending to Ebola patients. Black has blogged about his experience there helping patients and facing the constant risk of being infected with the deadly virus.

He tells of the heartbreak of working with patients, like a woman six months pregnant and stricken with Ebola. Black was also caring for her sick relatives, including her two younger brothers. The woman seemed to be improving, but her brothers died and it became clear the child she was carrying had died — and the woman's condition rapidly deteriorated. Black calls Ebola a cruel disease. He returned to his native Brussels this week, and he says he'll return soon to help more women.

The revolution will be tweeted ... and Instagrammed ... and blogged

The conflict in Ukraine may go down as the first war ever tweeted. The soldiers on both sides are increasingly bringing their smart phones to battle with them, and using them. Our partners at Global Voices interviewed a Ukrainian army officer, Sergei Misyura, who had been famous for writing a blog on cell phones, and brought his fan network with him when he went to war.

Misyura has faced challenges getting his writing out, with his phone breaking and connection problems often preventing him from posting updates to his active Twitter account. So his wife has pitched in because, Misyura says, he feels it's important someone tells the story of what's going on. The Russian journalists, he said, aren't telling the real story and the Ukrainian journalists can't do it — so it's up to citizen journalists like him to let the world know what's going on in eastern Ukraine.

That Ebola hospital the Pentagon says it'll build in Liberia? @itsjina found out it's just for foreign health workers http://t.co/xxoWtSa92I

The early snowstorm in Calgary, Canada, that we mentioned yesterday had some serious consequences. According to the CBC, the heavy wet snow toppled hundreds of trees and left scores of people without power. Almost four inches (10 centimeters) of snow were reported in Monday's storm, with another four to six inches forecast from another storm moving toward the area.