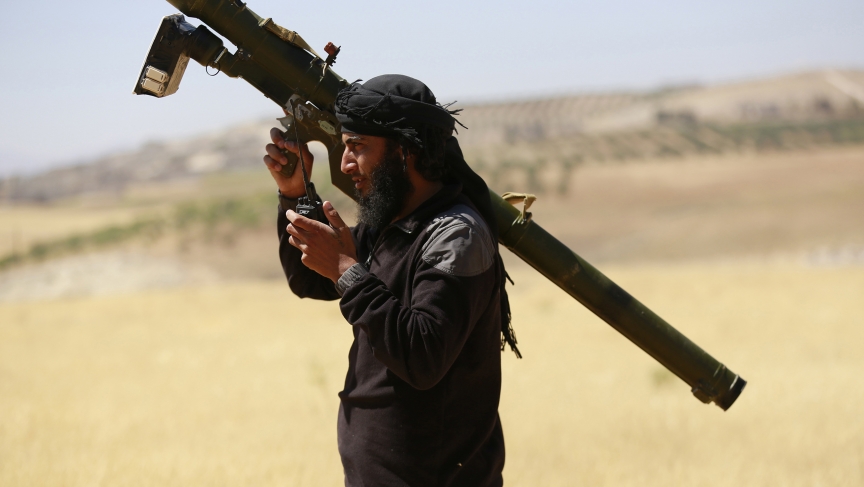 A fighter from Jabhat al-Nusra is pictured in Syria earlier this year. Qatar has facilitated fundraising efforts to provide money and weapons to Islamic militants like Jabhat al-Nusra, which is al-Qaeda's branch in Syria.
Credit:

Islamist militant groups have been popular causes in recent years, raking in arms, money and media attention across the Arab world. Now an investigation by the New York Times indicates that one such donor is the Gulf state of Qatar, an ostensible American ally.

“It’s a place where terrorist fundraising goes on,” says David Kirkpatrick, the Cairo bureau chief for the Times and the author of the story. Qatar, he says, “has made a bet on the future of political Islam.”

“Qatar has been a place where private fundraisers can raise money — a lot of money — so that militant groups in Syria, some tied to al-Qaeda, can buy weapons." he says. That includes Jabhat al-Nusra, a major rebel group that's al al-Qaeda's official branch in Syria.

Money has poured into the Syrian civil war from outside donors, but Kirkpatrick says that Qatar hasn't limited its support to that conflict. "It has also been supporting a broad spectrum of Islamists of one sort or another around the region,” he says.

Those groups include Hamas, the Palestinian group that's listed as terrorist group by the US State Department; the outlawed Muslim Brotherhood in Egypt; and also one of the factions in the new civil war in Libya. Fundraising has also been allowed for "Al-Qaeda in the Arabian Peninsula," the al-Qaeda affiliate based in Yemen.

“Its support for more moderate Islamists here in Egypt has really annoyed some of its neighbours,” Kirkpatrick says. In particular, Egypt, Saudi Arabia and the United Arab Emirates.

Some of Qatar's neighbors — Saudi Arabia and the United Arab Emirates chief among them —  are “kicking up quite a fuss," he says. "They’re doing the best they can to point fingers at Qatar as the main culprit in the funding of these al-Qaeda linked groups.”

That’s tough, though: Saudi Arabia, among others, also allows fundraising for the Jabhat al-Nusra Front.

There are also harsher accusations flying around, Kirkpatrick says: “Some people are even insinuating [Qatar] is actually supporting the Islamic State in Iraq and Syria, which is the worst of the bad actors.” But Kirkpatrick says he can't find any evidence to support that charge, and that no one seriously thinks Qatar is funding ISIS.

The tensions between Qatar and its neighbors have become so bad that, in some areas, Kirkpatrick says the two sides are engaged in a kind of Cold War through their local proxies.

But there's one line he says Qatar has been careful not to cross: Alienating the United States too much.