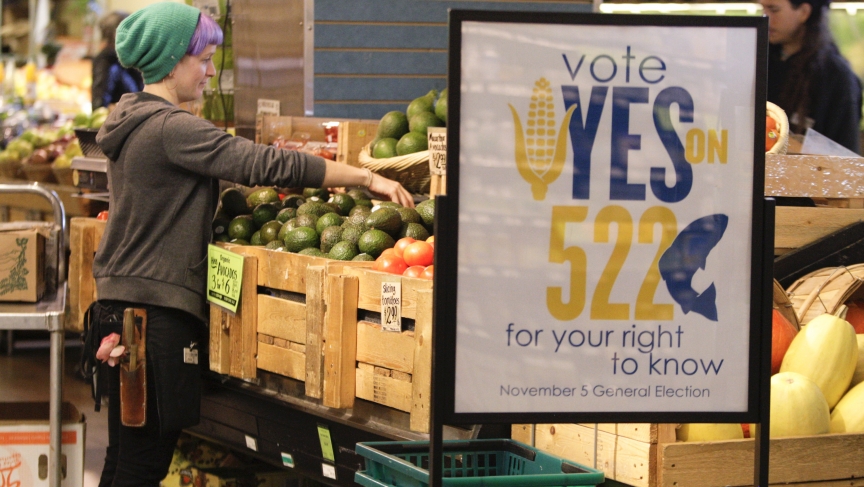 An employee at a Seattle co-op stocks produce near a sign supporting a 2013 ballot initiative in Washington state that would have required labeling of GMO foods. The initiative failed, with record amounts of money spent to defeat it.
Credit:

The debate over genetically modified foods in America now hinges on one question: To label or not to label?

Across the globe, 64 countries have enacted mandatory labeling laws for GMO foods. Major food makers like Coca-Cola and biotech giants like Monstanto and DuPont are determined to stop the passage of such laws in the US — so much so that they've spent more than $27 million in the first six months of this year on GMO-related lobbying. That's roughly three times their spending in all of 2013.

So why the uptick in spending, and why are they so adamantly anti-labeling?

The current drive is coming from Vermont, according to Carey Gillam, a food and agriculture reporter for Reuters who's been following GMOs for 16 years, almost since their inception.

In May, Vermont Governor Peter Shumlin signed a law that requires that GMO foods sold in the state be labeled. Some in the Green Mountain State are pleased with the new law, but industry groups are not.

In early June, the Grocery Manufacturers Association, a trade group that represents Monsanto, General Mills, Coca-Cola, and other food companies, filed a lawsuit arguing that the measure is unconstitutional.

“That litigation is ongoing, and who knows how long that will take," Gillam says. "Vermont is trying to raise money to defend the law and has raised over $1 million so far. But it looks like a long battle ahead.”

Vermont is just the tip of the iceberg, since several states are considering similar laws. This November, voters in both Colorado and Oregon will vote on GMO labeling proposals.

As ballot initiatives and new laws continue to pop up across the nation, companies are becoming more aggressive in their lobbying campaigns — and the $27 million spent in the first half of 2014 has been geared towards federal lawmakers.

“There’s federal legislation that would block any state labeling, and they are really putting their all into trying to sell that piece of legislation on the federal level,” Gillam says. “Of course, they are also spending money on campaigns in Oregon and Colorado to try to convince consumers that it would be bad to vote for mandatory labeling in November.”

Food companies argue that labeling will lead to higher prices. "The food giants really say that this will cause chaos in the marketplace, and that this is going to add significant costs for consumers,” Gillam says.

“They say it will create all sorts of confusion, and they would essentially have to label all of their products sold all throughout the United States because it doesn’t make sense, with the distribution chain the way it is, to just label things state by state.”

In addition to distribution issues, corporate opponents of labeling say that the practice would place a negative stigma on foods made with GMOs. “They think it might drive consumers more to organics, to natural food products,” Gillam says. “And, indeed, there has been a shift in consumer spending driving increases in organics.”

Gillam points out that supporters of labeling argue the practice would cost companies just “fractions of pennies” to put additional information onto food products. “They claim that consumers have the right to know, that this is important information and there should be no reason that companies want to hide it,” she says.

Corporate food giants frequently argue that there is little evidence that GMOs are harmful. “That is definitely their position and their argument,” Gillam says. “The people on the other side say that most of the scientific studies that have been done have been funded by the companies who are selling these products."

Since GMO food products were introduced in the 1990s, the Food and Drug Administration has never required mandatory safety testing of GMO foods.

Corporate lobbyists are trying to make their case against labeling in 20 states across America, according to Gillam. And it’s not just the legal system that they’re trying to work — biotech and food companies that produce GMO products are heading to universities.

“Last year, they also really decided that they needed to have a more direct relationship with consumers and launched a whole multimedia campaign, and a website called GMOAnswers,” Gillam says. “They’re going out on speaking tours to schools and just really trying to make consumers more comfortable with ... what they say is the safety of genetically-modified organisms.”

Yet the behavior and message of these companies seem to be at odds. The industry argues that GMOs are safe, but refuses to label their products, leaving many to wonder why.

“A lot of people have suggested that [companies] need to be proactive and put the label on there and not act like it’s something that people need to be afraid of,” Gillam says. “They have just said that they cannot do that — that it is misleading to put a label on there because it does make it look like there’s something to be afraid of, and they’re not going to do it.”

This story originally aired on PRI's The Takeaway, a public radio program that invites you to be a part of the American conversation.