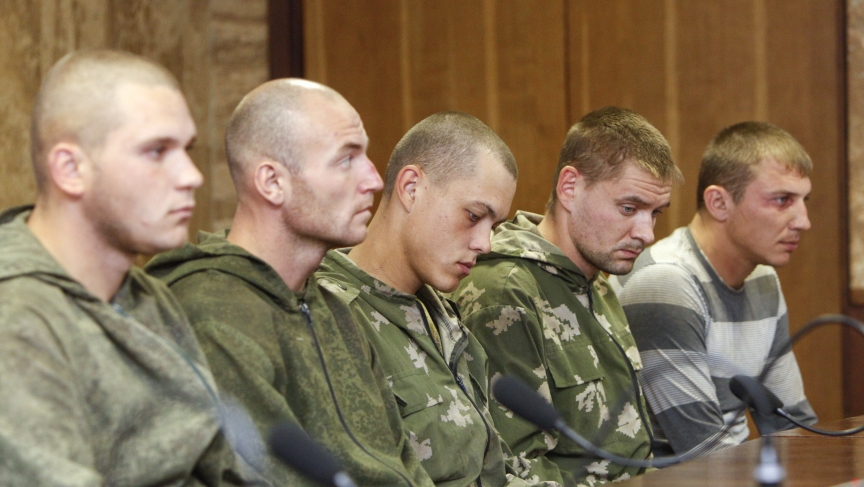 A group of Russian servicemen detained by Ukrainian authorities attend a news conference in Kiev on August 27, 2014. Ukraine said on Tuesday its forces had captured a group of Russian paratroopers who had crossed into Ukrainian territory on a "special mission" — but Moscow said they had ended up there by mistake.
Credit:

People have been dying in eastern Ukraine for months as the Ukrainian army tried to push back pro-Russian separatists. But now there is new evidence — an unannounced Russian invasion of eastern Ukraine is underway, and that Russian soldiers themselves are joining in the bloodshed.

Last week, the Ukrainian military claimed to have captured two Russian armored personnel carriers. Both vehicles allegedly carried documents proving that they were based in Pskov, a city in northern Russia near Estonia. On Wednesday, The New York Times reported about a fresh invasion by Russian forces.

Journalists and bloggers spent the next few days tracking down the social media accounts of the soldiers identified in the recovered paperwork. They discovered several accounts on Vkontakte, a popular Russian social networking site, where updates suddenly ceased just before the APCs were destroyed in Luhansk in eastern Ukraine.

Then, Russian journalists discovered a series of fresh graves in Pskov this week belonging to soldiers who died under mysterious circumstances. On August 26, when more reporters tried to visit the cemetery where they were buried, anonymous men attacked them and told them never to return.

A team did return to the cemetery later the same night hoping to gather more evidence about the recently departed, but the men were waiting for them again. The reporters retreated a second time as their assailants bashed their car and flattened their tires:

We were attacked at the cemetery, where they’ve probably buried the soldiers. They punctured the tires and tried to break the windshield. We narrowly escaped.

Despite being chased off by nameless goons, Vladimir Romensky, one of the journalists, still managed to snap a few photos of one of the new graves:

Here's another grave that likely belongs to one of the marines, whose name is in the [Ukrainian] lists, found in the Pskov cemetery in Kresty district.

As independent journalists have risked their personal safety to find out more about the buried soldiers in Pskov, some Russians online have wondered why the story isn’t getting coverage from the country’s most active investigative journalists — namely LifeNews, whose reporters seem to arrive at crime scenes before the police.

If Aram Gabrelyanov [the owner of LifeNews] up and sent his people to Pskov and produced a report, he’d shoot to the top of all Russian journalism. But, nope, nothing.

But not everyone on the Web is clamoring for more photos from the cemetery. Twitter user Natalia Grafskaya, for instance, shared her anger with TV Rain, Russia's only remaining independent station, for airing pictures from the cemetery.

The television station RAIN should be ashamed of promoting itself at a cemetery, where people are mourning. TV Rain is the Judas of modern Russia.

In a similar vein, the deputy head of Russia's federal communications agency asked ominously on Twitter if Slon.ru, one of the first major news websites to publish images of the graves, had first obtained permission from the soldiers’ relatives. Slon never responded, at least on Twitter.

On August 26, the day after photographs of the graves flooded the Russian-language Internet, the President’s Council for Human Rights — a semi-independent consultative body within the Kremlin — addressed a public letter to federal investigators asking police to get to the bottom of the situation in Pskov.  Council members Ella Polyakova and Sergei Krivenko argued that if the soldiers all died in some related incident, officials should open a criminal case.

Polyakova, the head of a “soldiers’ mothers” organization in St. Petersburg, wasn’t finished making headlines. Hours after asking the Investigative Committee to look into the graves in Pskov, Polyakova told TV Rain that a hospital in St. Petersburg had just admitted nearly 100 wounded Russian soldiers. The cause of the injuries remained unknown at the time of this article’s publication.

Meanwhile, the Ukrainian government claims to have captured 10 Russian soldiers some 12 miles deep into Ukrainian territory on August 24, posting YouTube videos of the interrogations of four men. In the videos, the captured servicemen — members of the 96th Airborne Division based in Kostroma — say they were conducting official training exercises when Ukrainian forces intervened and apprehended them.

“This is all just politics and money,” one soldier told his interrogator, seemingly trying to curry favor by explaining that an independent Republic of Donetsk — separatists have proclaimed a "People's Republic of Donetsk" in eastern Ukraine — can never exist. Writing on Facebook, Ukraine’s defense minister appealed to the families of Russian soldiers now on active duty, imploring them to find out where their loved ones are before they’re sent to fight in Ukraine.

For its part, the Kremlin denies that Russian troops have been deployed inside Ukraine, though Putin himself admits that patrols sometimes cross into Ukraine by accident.

This story by Kevin Rothrock was originally published on our partner Global Voices Online, a community of bloggers from around the world.