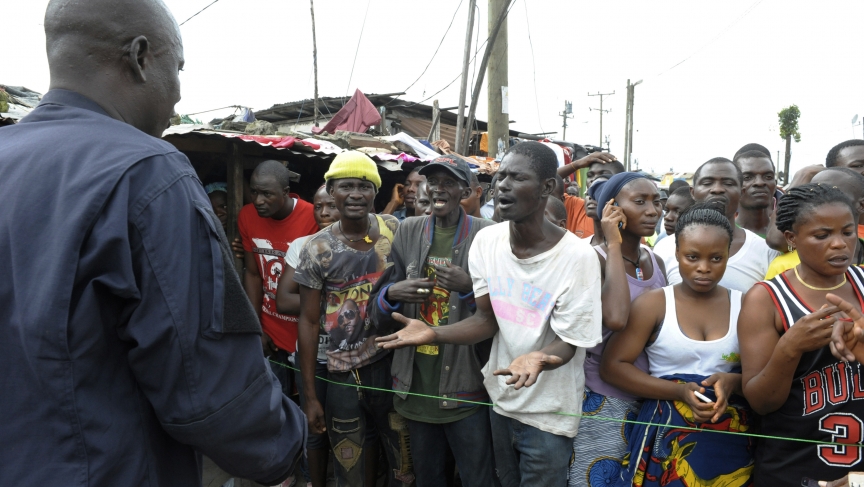 Residents in an Ebola quarantine area in the West Point of Monrovia, Liberia, complain to a security officer as they wait for their relatives to bring them food and essentials on August 23, 2014.
Credit:

With 1,427 reported deaths, the World Health Organization is calling the current Ebola outbreak in West Africa the worst in history. But unlike previous outbreaks, where mortality rates approached 90 percent, the current epidemic has spared about 50 percent of infected patients.

Those Ebola survivors tell remarkable tales of resilience and heroic care from local health workers. But there's also the sadness and rejection they've experienced because of widespread ignorance about the disease.

On Aug. 20, the WHO published a video on YouTube showcasing three of those survivors: Saah Tambah and Harrison Sakilla from Liberia, and Matu Kamara from Sierra Leone. In it, Saah Tambah explains how he became infected and how his life has been since his recovery:

I got the Ebola from an uncle in Koindu. I went to visit him for two nights because there was no one to take care of him. After a few days, he died and then his wife and daughter died too [..] I started vomiting and suffered from diarrhea so I went to the clinic. When I got sick, my family doubted my recovery. Thank God for the doctors. They gave me a certificate that indicates I am free of Ebola in case anyone would still doubt.

People who recover from the disease often face heartbreaking post-survival rejection. Many people don't understand how the disease spreads and suspect they can become infected by an Ebola survivor. Such is the story of Dr. Melvin Korkor, a doctor at Phebe Hospital in Liberia. Korkor survived Ebola but, he explained to the Liberian website Front Page Africa Online, his relatives and friends were wary of touching him:

Even though Korkor said he has been cleared of Ebola, he says that people avoid him. "Now, everywhere in my neighborhood, all the looks bore into me like I’m the plague,” he said. FrontPageAfrica reporter who trailed the Phebe doctor on Cuttington campus Monday observed that people left places when he showed up while friends, students and loved ones avoided his handshake or eat with him [...] “Thanks to God, I am cured. But now I have a new disease: the stigmatization that I am a victim of,” Korkor was quoted by a local radio station in Gbarnga. ‘This disease (the stigma) is worse than the fever.

Liberia is one of the four countries dealing with the outbreak, alongside Guinea, Nigeria and Sierra Leone.

Claudius Barnawolo, a Liberian physician's assistant, also beat the odds and survived Ebola. Front Page Africa Online recorded testimony from he and his family members, who also felt the stigma of rejection from their community:

Raising awareness about Ebola  — and how it is spreads — remains a challenge. Côte d'Ivoire has started an important Ebola prevention campaign, even though no cases have been detected so far in the country. Ivorian bloggers have repurposed the viral ALS Ice Bucket Challenge for Ebola awareness using the French-language hashtag #moussercontreEbola (Lather Up Against Ebola):

The work of scientists such as Korkor or Barnawolo to detect and sort out whether ailing patients have Ebola is also crucial in fighting the epidemic. Abdoulaye Bah, a volunteer author and translator for Global Voices, highlighted their work in Liberia (via Jina Moore):

Jeejuah, 30, and two other women, all volunteers, are cooking for 12 of the most important, but invisible, people in Liberia right now. The dozen meals are meant for the team of technicians that tests the blood of suspected Ebola patients. They visit sick peoples’ homes and overwhelmed Ebola treatment centers, sticking needles in the veins of physically unpredictable, highly contagious people. They then drive their blood back to Liberia’s only medical lab, more than an hour from the capital of Monrovia.

Fighting and surviving Ebola will take a tremendous deal of collective effort in the affected countries, especially considering the stigma inside and outside their borders. In the context of this epidemic, it has never been more crucial for the communities to realize that they need to get organized together in this struggle or — they will perish together.

This story by Lova Rakotomalala was originally published on our partner Global Voices Online, a community of bloggers from around the world.