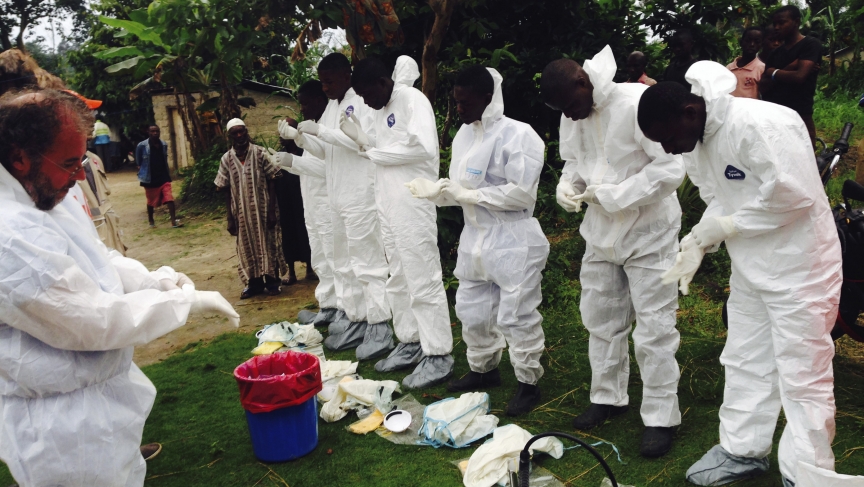 Volunteers prepare to remove the bodies of people who were suspected of contracting Ebola and died in the community in the village of Pendebu, north of Kenema July 18, 2014.
Credit:

Two Americans are at an Atlanta hospital, reportedly both recovering from their Ebola illness.

Both were treated with an experimental drug serum that had previously never before been used in humans, though it had shown promising results in primates. That the two Americans are now both reportedly recovering, and perhaps even expected to survive, ignited a firestorm of calls for the experimental drug to be made available immediately to those in Africa dying of Ebola.

But the US government says, even if it wanted to, it couldn't do that. It just so happens there's almost none of the experimental drug around. The Guardian reports that Nigerian health minister Onyebuchi Chukwu was told even if the drug was proven safe for use in humans, it would take months to develop the supplies needed to use it on any sort of scale in African nations. Even if they did become available, there are ethical concerns about using such an untested drug, as PRI's The World looked at.

When there are threats against an airline flight, those onboard are often the last to know

A Qatar Airlines flight to the UK was recently escorted to the ground by an armed fighter jet, but the passengers onboard had to figure out what was going on from Twitter. And while that may be surprising, it's really not at all uncommon. The BBC talked to a number of passengers onboard flights that experienced emergencies, and what they went through.

Among the people they talked to was Jane Barrie, who was aboard a flight from Phuket, Thailand, when a passenger died. It was only after landing that the crew informed passengers that the man had committed suicide. They also talked to a passenger who was aboard a flight that took evasive actions reportedly because of mechanical difficulties that turned out to be a bomb threat.

The US is one of the leading exporters of seafood in the world. And with its miles of coastlines on both the east and the west coasts, there's a great deal of sealife to be fished. But most of the seafood we eat in the US actually comes from overseas, imported, while we export our seafood to other countries.

PRI's Living on Earth looked at how the US started eating seafood that came from anywhere but here — or at the very least is first exported before being re-imported after some sort of processing. Take shrimp, for example. It's Americans' favorite seafood, more than salmon and tuna combined. But while American fishers harvest a variety of flavorful shrimp off our own coasts, most of what we eat comes from abroad.

China looks to tighten some loopholes in one-child policy

Even as China increasingly allows young, urban couples to have more than the country's mandated on child per family, it's tightening up some loopholes in its family planning laws as a weapon in its battle with the Uighur Muslim minority in Xinjiang province. The Chinese have been battling terrorism in and exported from Xinjiang for months.

Previously, Uighurs could have as many as three children per family, if they live in the country, where ethnic Han Chinese, the country's ethnic majority, could have only two. Now, the exception for Uighurs is being taken away, and at least four women have already been forced to have abortions, Radio Free Asia reported. Bloomberg looks at the current situation.

Abu Dhabi's economy runs on migrant workers who flock to the small Persian Gulf emirate, looking for jobs that will allow them to send money back to their families in any one of a number of impoverished African and Asian countries. But their lives in Abu Dhabi are rough — and they're very often exploited, taken advantage of.

Molly Crabapple, a visual artist, went to Abu Dhabi to interview some of the men about what they've gone through in their home countries to drive them out and what they've endured since arriving in Abu Dhabi. She spoke to PRI's The World about what she found, and shared some of the drawings she made of what she saw while she was there.

Hawaii hasn't seen a hurricane hit the islands in 22 years, but in the next seven days it could be hit by two in a row. Hurricane Iselle, with sustained winds of up to 85 mph was lashing the big island of Hawaii on Thursday, poised to weaken to tropical storm strength as it moved through the islands later Thursday into Friday, according to the Central Pacific Hurricane Center. Then, on Sunday, the islands will be hit again by what is now Hurricane Julio, though forecasters predict it will have fallen to tropical storm strength by then, according to the National Hurricane Center.