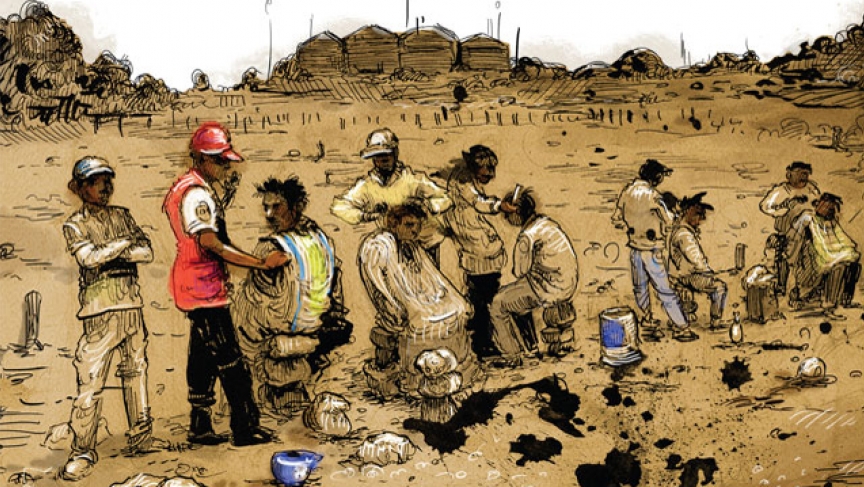 Illustration by Molly Crabapple for Vice Magazine. It's from one of the Worker's City in the Emirates. Workers spend their time off cutting each other's hair.
Credit:

Ibrahim is a young, South Asian man who works for a construction company in Abu Dhabi.

He is one of thousands of workers in the United Arab Emirates who are living and working in very difficult conditions.

Artists and columnist Molly Crabapple met Ibrahim while she was visiting the UAE to learn more about how these workers live and how they are treated. What she found out was a grim tale. She wrote about it for the online magazine Vice.

"He is a brilliant kid," Crabapple says about Ibrahim. "He speaks five languages."

Back in his home country, Ibrahim was a translator for an international non-governmental organization — until militants started killing locals who collaborated with foreigners. So he had to leave. Now Ibrahim works in what's called the "Saadiyat Island," in Abu Dhabi.

It's soon to be home to branches of the Louvre, the Guggenheim and New York University.

And life for workers there is far from easy.

"Ibrahim lives in something called "Worker's City," Crabapple explains. "These are housing projects for workers [all men] that are set deep in the desert, very far from central Abu Dhabi."

According to Crabapple, the idea is to isolate the workers so that Emiraties and wealthy foreigners "don't have to look at them."

She says 10 people live in one room and the place has a "desolate, Pyongyang-style atmosphere."

"There's literally nothing for them. The food comes from a communal cafeteria ... and it gives people low-level food poisoning," Crabapple says.

The workers are not allowed to cook in their own rooms. Ibrahim showed Crabapple one video in which all workers were drinking from one pitcher.

Crabapple says many of these workers come from countries such as Pakistan, Nepal and Bangladesh. They're in Abu Dhabi to earn money to send to their families back home.

Once there, employees often confiscate their passports, so leaving becomes very difficult. Many of the workers pay to get to Abu Dhabi for work. It takes a while for them to even pay back the money they invested in getting there.

But even with all the difficulties they face, many stay and keep working.

"People come to the Gulf not just because of money but because they're from crisis zones. I met many people who were fleeing violence in Kashmir or in Nepal and they came there because it's safe."

Meanwhile, Crabappple says worker exploitation happens all over the world.

Even in the US, she says, the agriculture business depends on workers paid less than minimum wage. The difference, according to her, is that the US government sees these migrants as criminals.

"The US says they're not official, we never encourage them to come here whereas Abu Dhabi has institutionalized this method of exploitation," she adds.