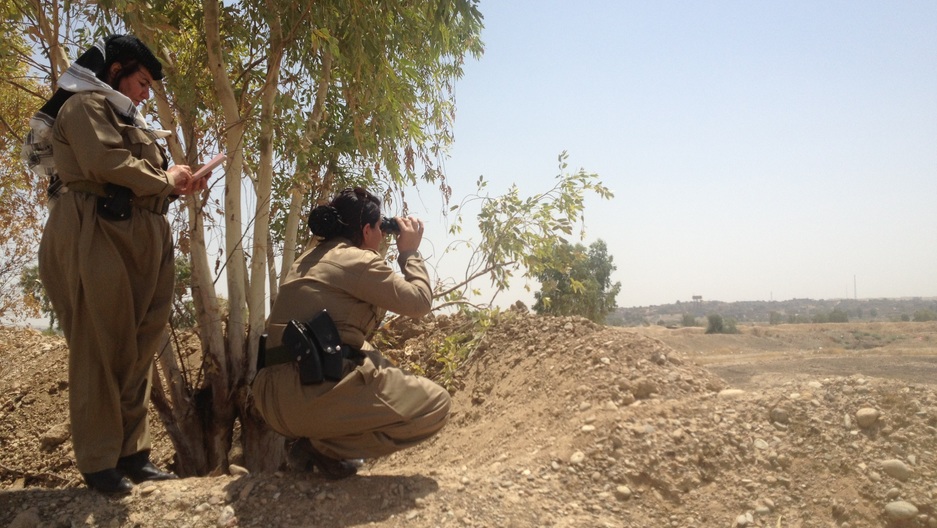 Since the start of the surprise offensive by the Islamic militants of ISIS in June, Iraq's Kurds have scrambled to defend a 650-mile long border.

At the southern tip of that extended front, just 80 miles away from Baghdad, is the town of Jalula. That's where Colonel Nahida Ahmed Rashid is heading on a resupply mission. She’s the highest ranking female commander in the peshmerga, the Kurdish militia that's taken over for the collapsed Iraqi army across much of the country's north.

Rashid began her military career as a teenager, fighting for for the Kurdish separatist movement. She's far from the only female peshmerga soldier — the militia boasts an all-female unit with "several hundred" members — but she's the only colonel who's a woman.

She earns the same wage as her male counterparts — just $1,000 a month. Colonels in the Iraqi army earn about twice that salary, but Rashid says money can't buy loyalty — and peshmerga fighters are loyal.

“They fight for no money, they fight for their people,” Rashid says. “I know there are some peshmerga at the front line [who] didn't get paid for months now and they're still there. We fight for this land here. What you see out there, that's our cause.”

The fight against ISIS was largely going well for the peshmerga, but the militants took control of key areas in northern Iraq on Thursday. In a statement on its Twitter account, ISIS said its fighters had seized 15 towns and a strategic dam in Mosul. It's the first time that the Kurdish armed forces have lost territory to Islamic militants.

Dozens of peshmerga fighters were reportedly killed. The Iraqi government sent its air force to back Kurdish forces, and the US is reportedly considering air strikes and emergency relief air drops. But despite the help, the situation was grim for Kurdish troops near Erbil, the de facto capital of Kurdish Iraq, by Thursday afternoon.

Out on a patrol, Colonel Rashid and the other fighters mount their weapons on the side of their trucks as they head toward Jalula. They're far away from that key area near Erbil, but they still face roadside bombs laid by ISIS and have received small arms fire in the past.

The peshmerga believe the presence of a female commander, an affront to the radical views of ISIS, makes the convoy a bigger target. When soldiers call out to her on the walkie-talkies, they call her by a male codename: "Mr. Muhammad."

The Peshmerga base in Jalula is less than a mile away from the Islamic State's self-declared caliphate. “ISIS is in that village," Rashid points out during the patrol. "Look at that thing over there, looks like a bunker. That's ISIS."

She also talks to her fighters to get the latest updates. One of the soldiers is 74-year-old Ahmed Karim, who's served in the peshmerga for nearly 50 years. He's fought against four different Iraqi presidents, including Saddam Hussein. But Karim says the radical Islamists are even worse.

"Saddam Hussein was ruthless," he says, "but he didn't cut people's throat."

For decades, the peshmerga were the ones fighting a guerilla hit-and-run battle against a regular army. Now the tables have turned: The Peshmerga are on the defensive, facing what they say is an "unknown, unseen enemy."