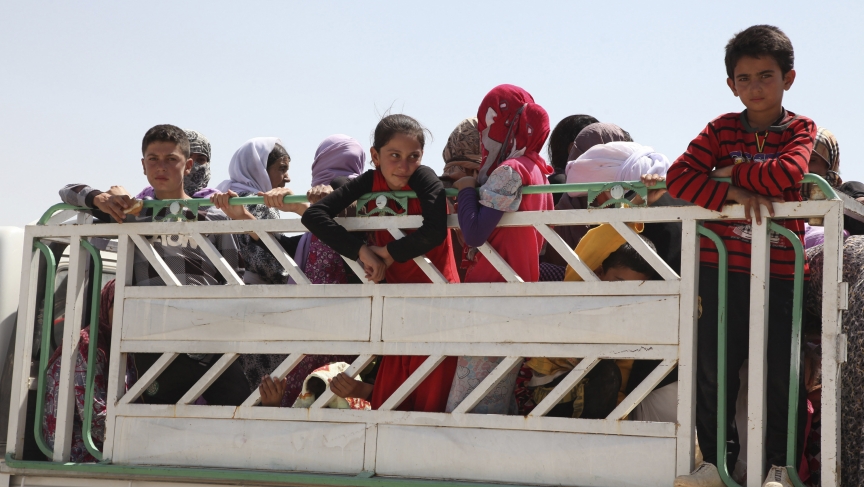 Displaced families from the minority Yazidi sect flee violence in the northern Iraqi town of Sinjar. Iraq's Prime Minister, Nuri al-Maliki, ordered his air force for the first time to back Kurdish forces against Islamic State fighters after the Sunni militants made another dramatic push through the north.
Credit:

The sectarian and ethnic battle lines in Iraq are usually clear. Shiites and Sunnis fight each other, while Kurds fight to just be left alone. But the emergence of ISIS, a militant offshoot of al-Qaeda, is changing that.

"Everyone wants to get rid of ISIS, but it's very difficult," says Jane Arraf, who reports for the Christian Science Monitor from Baghdad, leading to what she calls "interesting dynamics."

For instance, Iraq's Prime Minister, Nuri al-Maliki, is now allowing the Iraqi Air Force to support Kurdish militias. Those militias, called the peshmerga, stepped in to fight ISIS when the Iraqi Army collapsed. The Shiite-dominated Iraqi government first viewed that move as part of a larger Kurdish power grab, but have apparently realized they need Kurdish soliders to fight the Sunni extremists.

So will this gesture restore relations? Probably not.

"We have to remember, [Iraq has] a tiny air force," Arraf says. It's so small, in fact, that it uses small civilian airplanes of the same kind flown by aviation enthusiasts in the US. "They have a few Cessnas that have been modified to be able to fire missiles from them, US Hellfire missiles. And they have some helicopters, but fewer than they had before the fight started because the Islamic State has managed to down and destroy several of them."

Kurdish fighters have not been as aggressive in their battles with the militants. Rather, they've taken a more cautious approach.

"The Kurds have so far not conducted any offensive operations," Arraf says. "They've gone in and taken control of the oil capital of Kirkuk and several other oil fields to safeguard them. But when it comes to actively fighting, the Kurds have basically tried to hold the line."

Kurdish leaders say they don't have the forces to go on the offensive without help from the United States, which is making some unusual friends of its own. The US doesn't want to see Baghdad fall to Islamists, and neither does its traditional foe Iran, which is an ally of Iraq's Shiites.

"The Iranians now have the same goal as the Americans," Arraf says. "They are both, oddly, providing military security assistance."

The US has stepped up drone flights over ISIS-held territory and dispatched a small number of extra soldiers to Iraq, but it doesn't seem that major assistance is coming. Maliki, who faced widespread calls to resign over his sectarian policies, is due to appoint a new government by Friday, which Arraf says is holding back the prospect of aid.

"The trouble is that no one really on the US side is willing to put [in] American military might, even in the form of air strikes or enhanced intelligence, while Iraq operates without a government," she says.