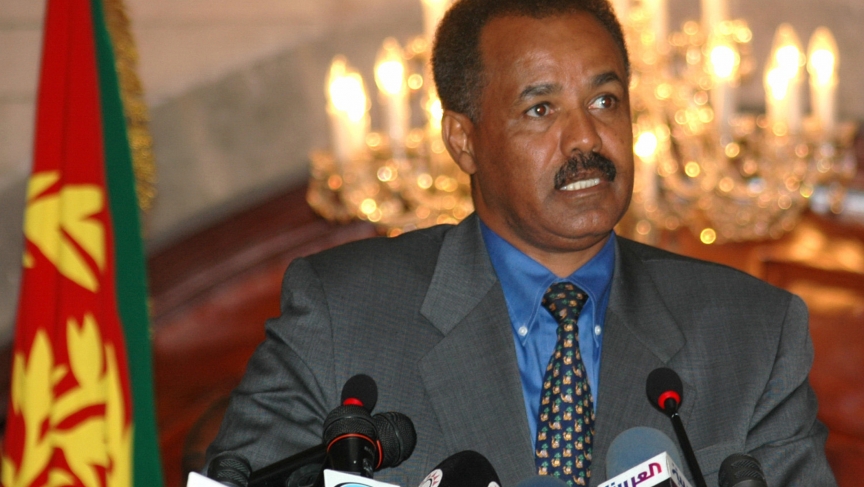 Eritrean President Isaias Afwerki was left off the invitation list to the US-Africa Leaders Summit in Washington, DC.
Credit:

The Obama administration invited nearly all of Africa's leaders to this week's US-Africa Leaders Summit, hoping to strengthen ties between the US and the continent. But not every head of state was welcome.

The leaders of Zimbabwe, Sudan and the Central African Republic were left off the list. They're either not in good standing with the African Union or are under US sanctions.

A fourth leader, Eritrea's Isaias Afwerki, was also not invited, and that snub has become big topic among Washington's Eritrean community. "My president is not invited and I am not happy about it," one Washington cab driver said. "The policy of American government when it comes to Eritrea is totally wrong."

The cabbie didn't want to give his name, but he describes himself as an Eritrean nationalist. He takes umbrage with the fact that his country was left out of these historic meetings:  "They sanction us, they don't invite us. There are more worse leaders who are invited here."

That may not be true — Eritrea has sometimes been called the North Korea of Africa. The government of Afwerki, who's held power since Eritrea gained independence from Ethiopia in 1993, has been accused of major human rights abuses, including forced labor and detainment without due process.

"He shouldn't be invited anyway because he's one of the bad leaders,” says Tadasse Alma, an Eritrean American who has lived in the US for nearly 40 years. He's at the Expo Restaurant and Nightclub in the heart of Washington's "little Ethiopia" neighborhood. It's become a place where expat Eritreans who oppose the Afwerki government can find community.

"There is no parliament. There's one president who has been running the country for how long? 23 years?" Alma complains. "He can do anything that he wants. That's not a country where people want to live."

That wouldn't be a popular opinion at the Eritrean Cultural and Civic Center, where Eritrean state television plays on a big screen. Flags of the president's ruling party hang from the ceiling.

Zecarias Berhe is a former organizer for that party, but he's not offended that Afewerki's invitation to the summit never arrived. "The reason why they didn't invite us, we are not 'Yes, sir,'" Berhe says. "We don't believe in, 'Yes sir.' We believe in self-reliance. We don't believe in loans and all that. So all African nations, they are dependent. They are parasites."

Unsurprisingly, Berhe thinks the summit is a joke. "People are dying in Nigeria, but Nigerian president is invited here," he says. "He's corrupted. All of them are corrupted. In Ethiopia, there's wars. They're fighting each other and killing each other. But they're invited here. So what is the use of inviting these idiots when they're not doing anything for their own people?"

As diverse as their opinions might be, all three Eritrean men agree on one thing about the summit: Nothing is going to get done.

"My president is missing nothing," the cab driver says. "A group of people will lecture each other and they will go. All they will do is eat special food and go back." A fancy dinner, he says, isn't going to bring change back home.