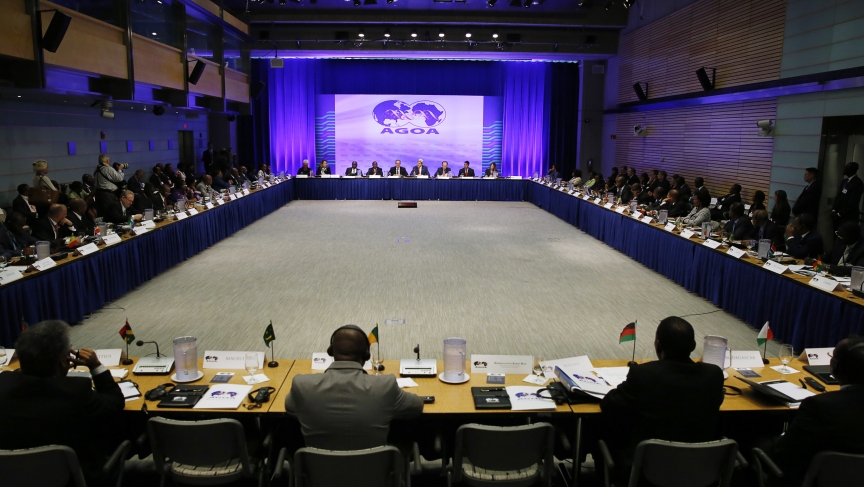 Representatives from various African nations gather at the opening session at the AGOA Forum during the US-Africa Leaders Summit in Washington August 4, 2014.
Credit:

Nearly 50 African heads of state are in Washington this week for the US-Africa Leaders Summit, the first-ever event of its kind.

President Barack Obama says the summit is a chance to focus on economic ties and build links of "mutual responsibility and mutual respect" with a continent that's often on the backburner of American foreign policy. That's in comparison to China, which has poured money, people and attenion into Africa in recent years.

“I do not see the countries and peoples of Africa as a world apart," he said on Monday. "I see Africa as a fundamental part of our interconnected world, partners with America on behalf of the future we want for all of our children."

But it's not clear how much can actually be achieved given the sheer number of leaders who've come to Washington — nearly 50 from across Africa — and the dizzying number of important issues to be addressed, from trade to security to wildlife trafficking.

"African leaders have come with a hugely disparate list of items they'd like to talk about," points out Chris McGreal, who's covering the summit for the Guardian. "There are countries where security is very high up the agenda, including Kenya and Nigeria. There are other countries principally concerned about opening up ... greater trade opportunities with the US, particularly bits of southern Africa and West Africa."

Health issues are also likely to come up, because of the ongoing Ebola outbreak in West Africa and the drawdown of the assistance given by the US to fight the spread of AIDS. Liberian President Ellen Johnson-Sirleaf and Sierra Leonean President Ernest Bai Koroma both stayed home to deal with the Ebola crisis, but the challenge of the disease has broader implications for those at the summit. "The spread of Ebola is a warning of the dangers of poor health systems in parts of the continent and emphasizes why they need to be addressed," McGreal says.

The issue of human rights, however, is curiously absent from the list of topics that African leaders will tackle. "There are sessions on wildlife trafficking but nothing on human rights," McGreal says. "So I think there's a deliberate attempt to underplay it."

But McGreal also expects human rights to come up during other discussions. In Nigeria, for example, "the US can't be seen to be too close to the Nigerian government in combatting Boko Haram because the Nigerian military has plenty of blood on its hands. It's been killing civilians and destroying property and has shown very little respect for human rights in its efforts to go after Boko Haram and the same goes for actions taken by the military police in Kenya."

Samantha Power, the American ambassador to the UN, has likened the whirlwind couple of days to a kind of "speed dating" among the African leaders, and the metaphor might be apt. McGreal says by the end of this week's summit, he expects a sense "that at least the US is paying a degree of attention that it hasn't paid in the past." But according to the White House, the president will not have the time to hold any extended one-on-one meetings with the visiting African leaders.