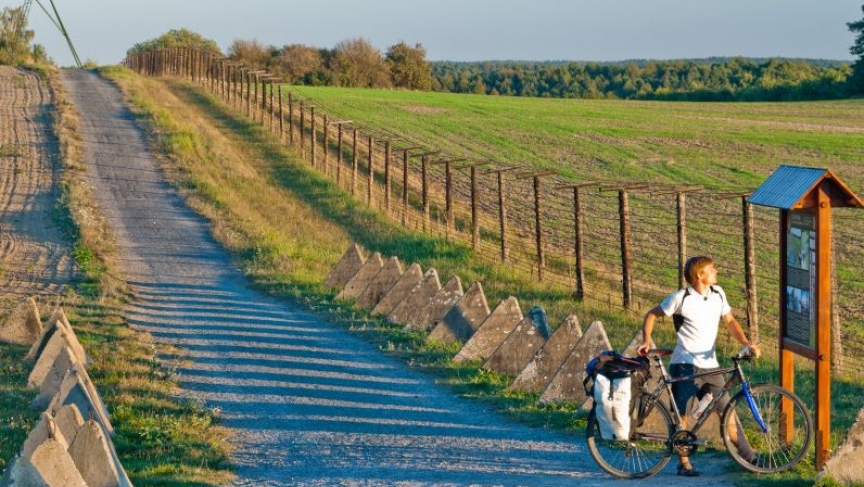 A rider checks a map along the Iron Curtain Trail.
Credit:

Courtesy of the Iron Curtain Trail

We're looking for name of the geo-political border that once stretched from the Barents Sea to the Black Sea. During the Cold War, this border separated the Communist East from the capitalist European West.

Now that the Cold War is over — we think —  the demarcation has taken on a less foreboding role: It's now a bike path.

Can you name it?

It's the Iron Curtain — or, if you're a bike rider these days, the Iron Curtain Trail — and that's the answer to our GeoQuiz. It's a network of bicycle paths that's even longer than Winston Churchill's famous "from Stettin in the Baltic to Trieste in the Adriatic" route. It starts way up north at the Barents Sea where the Norwegian, Finnish and Russian borders are all close together. It passes a short stretch of the coasts of Estonia, Latvia and Lithuania, Kaliningrad (a Russian enclave on the Baltic Sea), Poland and the former East Germany. From Lübeck to the "three-nation border" (Saxony-Bavaria-Czech Republic), the path follows the old dividing line between West and East Germany. 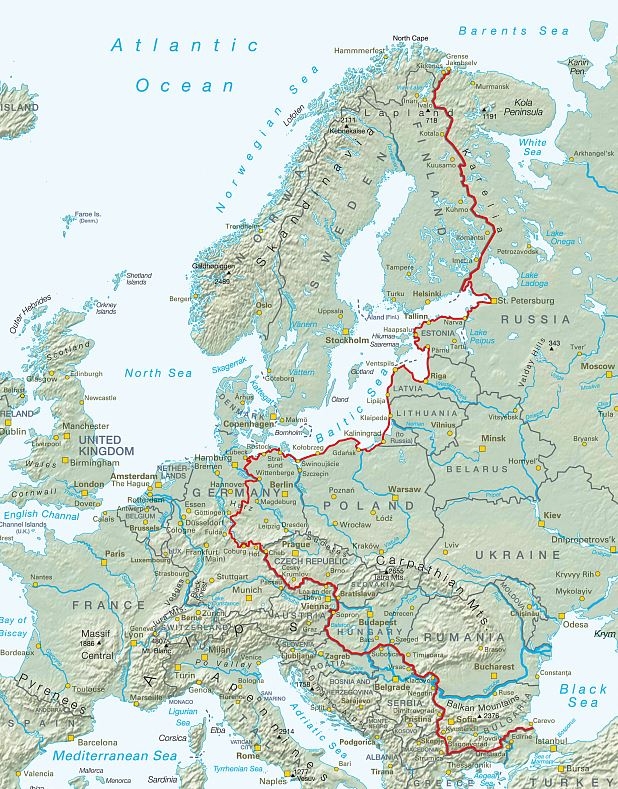 A map of the Iron Curtain Trail, which traces the extent of former Soviet domination in Europe.
Credit:

Courtesy of the Iron Curtain Trail

After that, the trail follows the highlands of the Bohemian Forest, passes Moravia and the Slovak capital of Bratislava, and crosses the Danube near Vienna. It then follows the southern border of Hungary via Slovenia and Croatia. Between Romania and Serbia it mostly follows the Danube, and, finally, via Bulgaria, Macedonia and Greece, it ends at the northernmost point of Turkey on the Black Sea coast.

Michael Cramer, a member of the German Green Party, represents Berlin in the European Parliament. He's been promoting the idea of a bike trail along the Iron Curtain after his hometown tried a similar experiment along the old route of the Berlin Wall.

"When the wall came down in Berlin, we took an initiative to make a bicycle route where the wall used to be," Cramer explains. "Today it is sign-posted, it is built in a bicycle friendly manner and it is a tourism highlight because people come to Berlin because of the history. It's said that 'Only the one who knows the past will master the future.' We all want to master the future, therefore we have to look at the past."

Cramer says it's not easy to remember that, just 25 years ago, the border and coastal areas along the Iron Curtain Trail were military-only zones. They were off-limits to ordinary people and strictly enforced by soldiers and police. Along some sections of the trail in Germany, plaques have been placed to mark where people were killed trying to flee to the West. In contrast, Cramer says, "Today we are free, and you can go see the actual 'death strip'. We have overcome, citizens have overcome the division of Europe."

Cramer says cycling is the perfect way to experience this Cold War history: "If you cycle, you go fast enough to see a lot, but slow enough to look at it. And here (along the Iron Curtain Trail) you can stop and see the monument, the barbed wire, the watchtowers, and cross over the border to have a feeling. 25 years ago it wasn't possible, and today it is not necessary to show your passport."

Some of those Cold War watchtowers still face each other in German villages located along the trail.  Cramer cites one location in the village of Geisa in the German state of Thuringia: “This was Point Alpha, it was the western most point of the Warsaw Pact and easternmost point of NATO territory. The armies of the two blocs came face to face at a distance of only 200 meters."

Cramer says there's much more history and many, many more miles of bike path to explore. So far he says he's cycled along half of the Iron Curtain Trail, and he's not done. “In the next five years," he pledges, "I will do the rest."