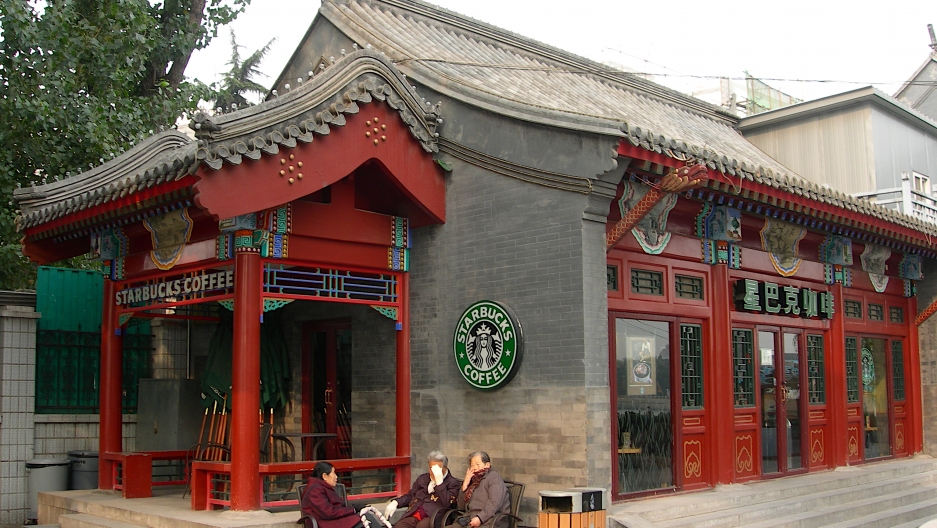 Starbucks in China, like this one in Beijing, discovered recently that a food supplier was sending them expired meat. The scandal hit several fast food restaurants.
Credit:

Western-branded, fast-food chains across China — like Starbucks, KFC, Pizza Hut, McDonalds and more — are being grilled, and fried, in Chinese media these days over a food safety scandal. Turns out that expired meat has made it into some of their products.

Dragon TV in Shanghai revealed, after a two-month investigation, that one particular meat supplier was repacking expired beef and chicken. Husi Food, a subsidiary of the Illinois-based OSI Group, was to blame and Chinese authorities have now closed its processing plant.

The fast-food chains have rushed to take items with potentially expired meat, like that Chicken Apple Sauce Panini, off the shelves. It's far from the first food safety scandal in China, and regulators say they'll investigate and crackdown, according to Global Voices Online.

What do you mean they're not from India?

File this one in the "oops" category for sure. Two high-ranking State and Commerce Department officials were testifying before a committee of the US House of Representatives when Rep. Curt Clawson repeatedly asked them to convey a message to "their" government, and expressed his deep admiration for Bollywood and his appreciation of "their" country.

The two individuals, Nisha Biswal and Arun Kumar, have Indian surnames, and their heritage is South Asian, but both were testifying before the committee on behalf of the US government and are Americans. Foreign Policy has more, including video of the awkward exchange between Clawson, a Florida Republican, and Biswal and Kumar.

Pope Francis wants Catholics to think about the Earth

Pope Francis has been leader of the Roman Catholic Church for a little more than a year. In that time, he's focused on poverty and income inequality — two areas his recent predecessors haven't devoted as much time to. Here's another: the environment.

Francis recently told a group of students that polluting and exploiting the Earth is a sin. And he's said to be working on an encyclical, a sort of papal directive to the faithful, on environmental stewardship. PRI's Living on Earth looks at why Francis is choosing to promote environmentalism, where his predecessors have not.

Plane crashes seem to have dominated the news over the past week. One in particular, though, has slid largely beneath the radar. TransAsia Airways flight 222 crashed on an island off the coast of Taiwan earlier this week, but a few of the passengers survived — including one woman who crawled out of a hole in the plane that opened up during the crash.

Hung Yu-ting crawled to a nearby farmhouse, where she was able to call her father, who fortunately lived not far away on the island. The Associated Press reports that the woman was taken to a hospital by ambulance before her father arrived, but they've since been reunited.

Here's something you don't hear about every day, especially as violence continues in Gaza. A Washington, DC, internship program brings Palestinians and Israelis together, has them live together, and then assigns them to organizations working for the other side.

The whole idea is to promote better understanding of why each group believes what it does, and to help people see each other as people. PRI's The World talked to two men, one Israeli and one Palestinian, who have spent the summer living and working together as part of the program.

The investigation into the crash of Air Algerie flight 5017 is just getting underway in the African nation of Mali, but already investigators are looking to the skies. Strong thunderstorms were reported in the area where the MD-83 went down, potentially contributing to the crash that killed 116 people, according to the New York Times.