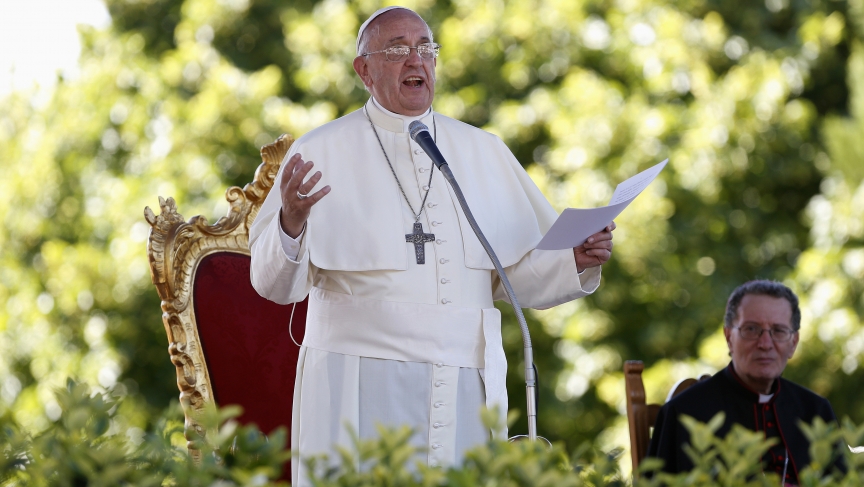 Pope Francis speaks outside the Castelpetroso sanctuary near Isernia in southern Italy on July 5, 2014. During the speech, he told students that environmental damage was a sin.
Credit:

Having focused much of his papacy on issues like poverty and inequality, Pope Francis is now calling on the world's 1.2 billion Roman Catholics to pay attention to another problem: environmental destruction.

"This is our sin: exploiting the Earth and not allowing her to give us what she has within her," Francis said during a speech to students in southern Italy earlier this month.

The Pope is also working on a document called an encyclical to lay out his doctrine about how humanity should relate to nature and our environment. And that, says Christiana Peppard, is big news.

"An encyclical is a huge deal — at least for the Vatican hierarchy," says Peppard, who's an assistant professor of theology, science and ethics at Fordham University, "and, in theory, [it] should also be a pretty huge deal for Catholics in the pews."

Many Catholics get their doctrine filtered down via priests and sermons. But, Peppard explains, an encyclical is still "an authoritative document from the highest levels of the Vatican, signed with the signature and seal of the Pope." It will also be the first one to explicity tackle environmental issues. All of that means it should have a big impact no matter what.

"It is a really strong statement," Peppard says. "For a Pope to say that deforestation and ecological destruction are the sins of our times is really throwing down a gauntlet. It prompts Christians, especially in the US, to think about how we understand sin and how we understand responsibility."

That understanding has traditionally centered on individual acts and transgressions, Peppard says. But talking about the environment — just as with emphasizing poverty and shared responsibility for the poor — opens to the door to thinking about sins in a larger context.

"Causality is much more complex. It has to do with patterns of global economy, of governance, of incentive, of poverty of the need for arable land and subsistence," Peppard says. "How we think about sin and in that context is complicated, and I appreciate that he's trying to complicate the picture."

She thinks that Pope Francis, an Argentinian, is familiar from his life in South America with "the ways in which extractive industries and environmental degradation often have negative impacts for people living in situations of poverty." But there may be even larger questions than the impact on humanity.

"Are these extractive — we’ll just call them extractive excesses — are they depleting a world that the Catholic Church understands God to have created as good?" Peppard asks. "So is that then not just ... a sin against fellow humans, but also perhaps a sin against God and the integrity of the created order?"

Even if that's true, the encyclical may have a distinctly worldly sense of timing. The United Nations is in the middle of talks on issues like freshwater access and climate change, and Peppard says "the release of this encyclical is currently scheduled to be timed relatively concurrent with some of those big meetings and negotiations." There's even the interesting — if unlikely — possibility that the pope, as the Vatican's head of state, could actually join the UN's Framework Convention on Climate Change instead of just observing the talks.

These are all weighty questions, but there are still mundane issues to tackle. Encyclicals are written in Latin, so before Catholics can discuss issues like nuclear power and fracking, Vatican scribes will have to figure out translations for them.