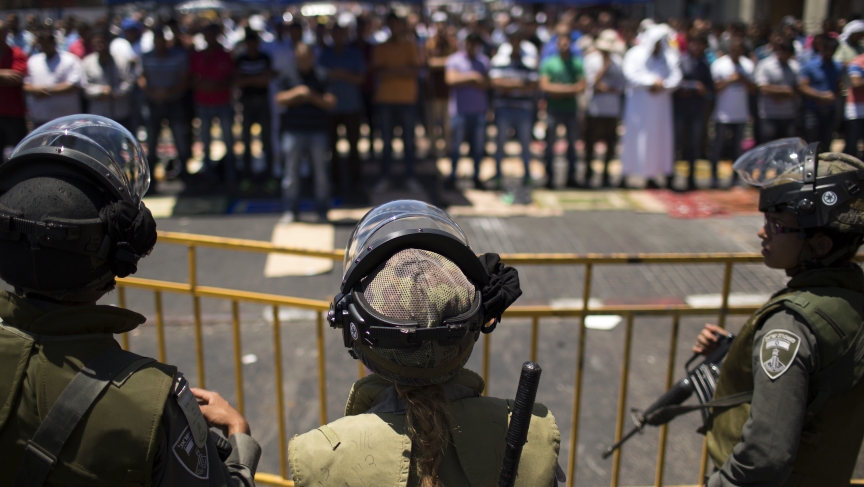 Israeli police stand guard as Palestinians pray on the last Friday of the holy month of Ramadan outside of the Old City in Jerusalem, on July 25, 2014.
Credit:

The news started to leak before America's top diplomat even walked up to the podium in Cairo. Neither Israel, nor Hamas, was willing to endorse a ceasefire arrangement John Kerry hoped could put a lid on the violence first, and set the table for negotiations later.

When he did finally step up to that podium, the Secretary of State thanked his negotiation partners and said they were making some progress toward implementing a seven-day truce. But “terminology,” Kerry said, remained an obstacle.

In the meantime, hostilities between Israel and Palestinian militants in the Gaza Strip continued to take their toll on Friday. More than 800 Palestinians have died, along with 36 Israelis. And simmering anger over the deaths of Palestinian civilians in Gaza threatened to boil over in the Israeli occupied West Bank.

“The daily reality for too many people of grief, blood, loss and tears — it all joins together to pull at the fabric of daily life in each of [Israel's and Gaza's] communities,” Kerry said.

Kerry said he is confident that Israeli Prime Minister Benjamin Netanyahu is committed to working to find a solution for a ceasefire with Gaza. The secretary also urged the parties to “come together,” which is difficult to imagine.

Israel (along with the US and European governments) considers Hamas a terrorist group, while the Hamas charter rejects “so-called peaceful solutions” for the question of who rules over the holy Islamic territory of Palestine.

Netanyahu's security cabinet met to discuss Kerry's proposal on Friday and its members were less than impressed.

For its part, Hamas says it wants a truce as soon as possible. But its leader-in-exile, Khaled Meshaal, says Israel needs to lift its blockade of the Gaza Strip.

Hamas also wants Egypt to open its only border crossing with Gaza, and it wants Israel to release Palestinian prisoners detained in the recent crackdown following the kidnapping and murder of three Israeli teenagers.

The western backed Palestinian Authority that maintains some control over the West Bank has suppressed protests against Israeli actions in the Gaza Strip. But that changed on Thursday, when Palestinians pulled off the largest demonstrations seen in the West Bank in years.

“People here are telling us over 30,000 people came out and marched on Qalandia, that's the main checkpoint between Jerusalem and Ramallah,” said Buzzfeed's Middle East correspondent, Sheera Frenkel.

Frenkel walked through the area today and said, “You could just smell the charred remains of Molotov Cocktails that had been thrown. There were rubber bullet casings everywhere. And it was clear that it had been a very, very violent night.”

But what is not so clear is whether events in the West Bank amount to the start of a large-scale Palestinian uprising against the Israeli occupation, a "third intifada." And in any case, Frenkel said much of the frustration in the West Bank is being directed toward the Palestinian Authority itself.

“People are angrier now than they have been before,” Frenkel said. “But they're saying that the PA has been complicit with the Israelis, that by not standing up earlier and condemning what Israel has been doing in Gaza, the PA basically gave [Israel] free reign.”

The former head of Israel's Shin Bet security service, Yuval Diskin says it is impossible to predict another intifada. “But I would warn against believing that the Palestinians are peaceful due to exhaustion from the occupation,” he told Der Spiegel in a recent interview.

“When people lose hope for an improvement of their situation, they radicalize. That is the nature of human beings. The Gaza Strip is the best example of that. All the conditions are there for an explosion. So many times in my life I was at these junctions that I can feel it almost in my fingertips.”