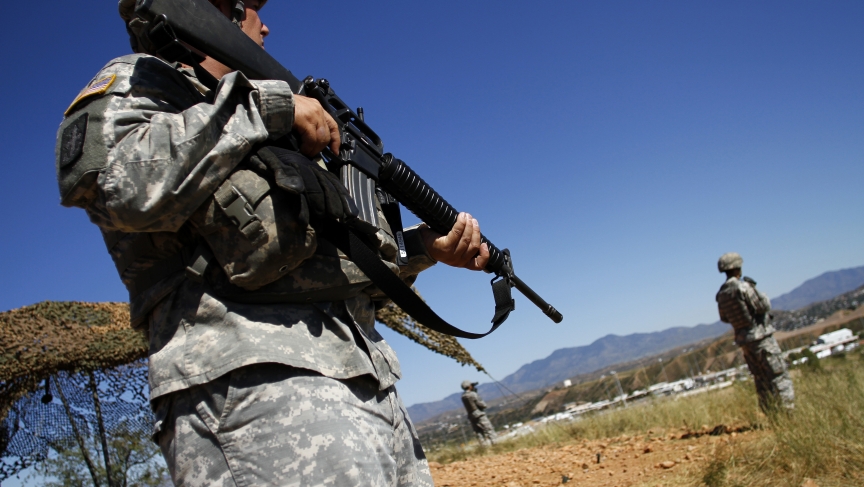 National Guard troops patrol along the US-Mexico border in Nogales, Arizona, in 2010. Texas is authorizing a similar call-up on its border.
Credit:

At a press conference in Austin this week, Texas Governor Rick Perry announced plans to tighten security along the Rio Grande Valley near the US-Mexico border.

“I will not stand idly by while our citizens are under assault and little children from Central America are detained in squalor," Gov. Perry said. "We are too good a country for that to occur. That is why I'm using my executive authority as governor of Texas and activating the National Guard.”

Perry is authorizing a call-up of up to 1,000 soldiers. The decision comes amid the continued surge of of tens of thousands of child immigrants coming from Central America. Perry and law enforcement officials in the area have said the diversion of resources is pushing crime up in the area, adding that unaccompanied children make up just 20 percent of these illegal crossings.

"As the brave men and women of our border patrol are pulled away from their law enforcement duties to give humanitarian aid, drug cartels, human traffickers [and] individual criminals are exploiting this tragedy for their own criminal opportunities," Perry said.

Immigration is a powerful issue among conversatives, and some political observers suspect that Perry, a 2012 Republican presidential candidate, is using the call-up on the border to help boost his stock for another run.

Laura Collins, the director of immigration policy at the American Action Forum, disagrees. "I think it oversimplifies it to call it just a political or campaign issue," Collins says. "There is something [Perry's] going to get out of it from the base, but at the same time, border security and immigration are issues that Texans deal with every single day. Safety and security matter to Texans, and [Perry] is addressing what he perceives is a gap in the federal response."

Texas law enforcement officials, along with federal border patrol agents, have been drawing attention to what they say is an escalating crisis at the border for the last two years.

But Perry's decision to use the National Guard is inherently limited. The laws that govern National Guard troops are different depending on whether they're called up by their state or the federal government. And because Perry activated the soldiers, their role is much more constrained.

"If President Obama were to call up the National Guard, he would be able to call them to assist the US Border Patrol," Collins explains. "Perry is only allowed to call them up to assist with state law enforcement — they're only going to be assisting the Texas Department of Public Safety in trying to catch criminal activity, rather than assisting with the actual immigration issue."

And Clay Jenkins, a Dallas County judge, says there isn't actually much crime happening on the Texas border, anyway. Sheriffs in the border region have questioned the need for soldiers.

"What I understand from the sheriffs is there is a very minor uptick in crime there, and the best way to deal with that is to add a few more sheriff's deputies," Jenkins says.

The National Guard may help Texas Department of Public Safety officers get relief from long hours, which sometimes exceed 60 hours per week. But Jenkins isn't sure that benefit is worth the price tag for the National Guardsmen — as much as $5 million per week.