On a recent weekend in New York City, a ball rocketed across an asphalt court. It was then volleyed, set up and a player leapt to slam it over the net. A wall of six airborne players blocked the ball and shot it back across the net.

One point for the serving side.

It was my first time seeing a game of nine-man. It’s like volleyball, but teams have nine players per side. Volleyball typically has six. That means more hands at the net, longer volleys, and a really intense game. It was also the perfect weekend to check out the sport. A tournament was on, ahead of a national championship that will happen over Labor Day weekend.

It was also happening in Chinatown, the kind of place where nine-man first took hold in the US. It was during the 1930s, when US federal law restricted Chinese immigration. Families were separated, and men left alone in the US bonded over the sport. “During that exclusionary period, it was essentially an isolated bachelor society in America in the Chinatowns across the US,” said Tom Fong, who has played nine-man in Washington, DC for three decades. “Cooks and laundryworkers would find creative ways to entertain themselves within their insular communities. And so they remembered the game they played back in Toisahn, China.”

It’s unclear how this style of volleyball originally got to the city of Toisahn, in southern China. Some say it was introduced by missionaries, while others think it was brought back by early Chinese immigrants returning from the West.

However it happened, it has started popping up again in Chinatowns in the US. 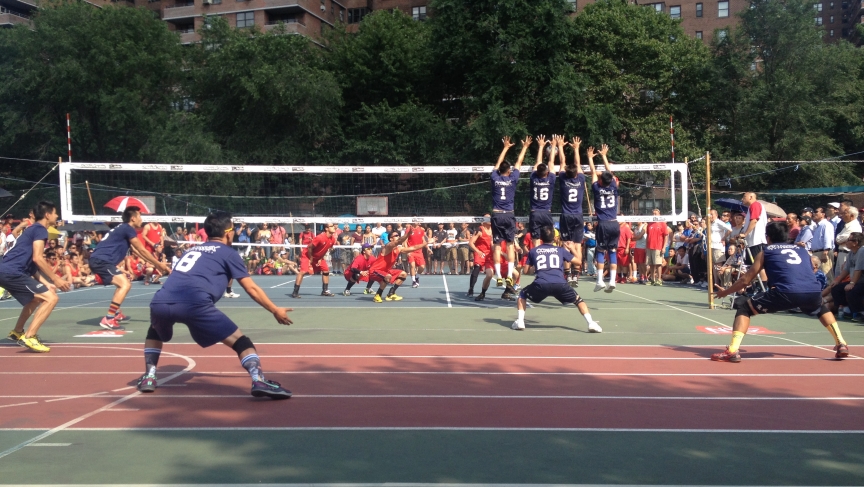 A team from Toronto, Canada attempts to block the ball during the "NYMini" nine-man tournament in New York City's Chinatown.
Credit:

And there’s one position in the sport that’s definitely my favorite. It’s called suicide.

“Suicide is the person that picks up all the hooks, the really fast ones. So it’s all coming to your face, so it’s kind of dangerous,” said 21-year-old player Bennie Wong, who moved to New York seven years ago from Toisahn. His dad played nine-man there, and the more we talked about the sport, the more I thought about playing myself.

But I can’t play, at least not officially. I’m not Asian. Current competition rules require that two-thirds of the players on the court must be 100 percent Chinese. And the rest of the players must be of Asian descent.

Some say these rules are discriminatory, but Danny Moy disagrees. He organized the tournament in New York and says it’s about maintaining the game’s history, and how Chinese immigrants here once fought being marginalized, especially until 1943, when the US repealed federal laws that excluded Chinese immigrants.

“I like to keep traditions. It’s important, if we don’t do it than it’s going to die out,” he says.

That’s unlikely. Tom Fong says, in the 30 years he has played nine-man in the US, the number of teams competing in big tournaments has doubled. He has also noticed a better level of play.

“Now, you see these guys that are 6-foot-2, 6-5, former college players, former pro beach players, who play this sport,” he said.

And the national tournament that DC hosted last year was a far cry from the early days, when restaurant workers put up nets across Chinatown backalleys. 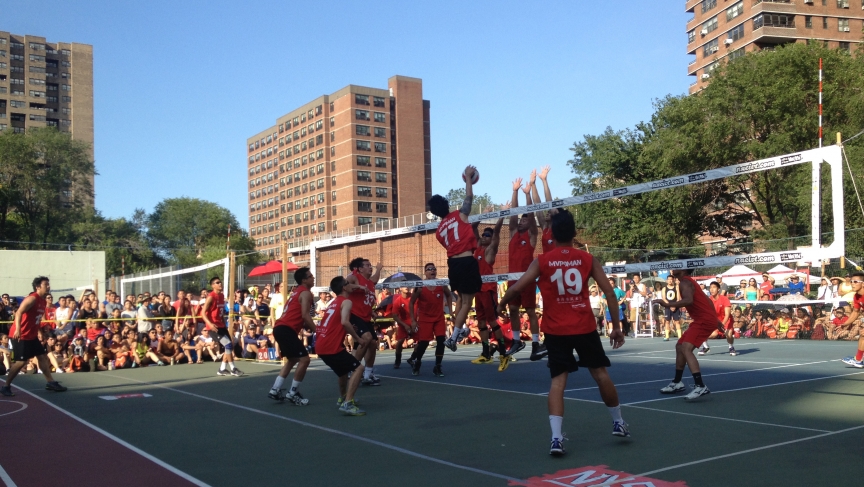 This move is called a 'fai gok' in nine-man.
Credit:

“We held it [the tournament] on the streets of Washington, DC. And not just any street — Pennsylvania Avenue. So we shut down Pennsylvania Avenue for a glorious couple of days, right there in the shadows of the US Capitol. It was kind of a statement: we’ve come a long ways since the exclusionary period,” Fong said.

In recent years, a nine-man team from Toronto has dominated the scene. When I checked out the nine-man tournament last Sunday in New York, crowds packed in to see the Toronto team face a Canadian rival.

I, rather unprofessionally, found myself taking sides — rooting for the underdog. I did manage to keep myself from dropping a bet with some of the old timers hanging out along the fence. The underdogs ended up winning, though. It would’ve been a good bet.

Below is a clip from a recent documentary about the nine-man, directed by Ursula Liang.