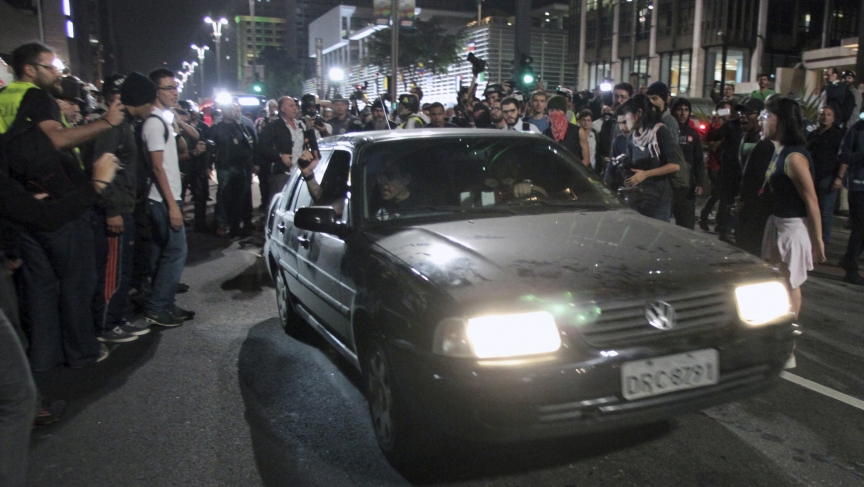 A Brazilian policeman pulls a gun out of the window of a car during a June 23 protest against the World Cup on a street in São Paulo. Activists say the arrests of two men at those protests were trumped up by police.
Credit:

Brazilian activists say that police forged evidence to incriminate two protesters arrested in São Paulo at the end of an anti-World Cup protest in late June — and they say they can prove it.

According to a police report obtained by Human Rights Watch, officers claimed to have found a "homemade explosive device” in Fabio Hideki Harano’s backpack and a “bottle of yogurt that smelled heavily of gas” on Rafael Marques Lusvarghi on June 23. They were accused of possessing illegal weapons, resisting arrest, conspiring to commit crimes, inciting crime and disobeying police authority.

In a press statement the day after the arrests, Fernando Grella, the chief of public security for the state of São Paulo, said that the pair were “the first cases of ‘Black Blocs’ caught red-handed encouraging criminal acts,” labeling Harano and Lusvarghi as members of an anarchist group that is known for vandalizing property during protests.

Yet police have not produced evidence of the alleged explosives, and activists are using photos and videos to refute police claims. The two men have denied the charges.

The eyewitness accounts of the day, along with the videos and photos published online, seem to challenge the official narrative.

Hideki Harano, a student and public servant, was on his way home when he was arrested inside a subway station by plainclothes agents from DEIC, the police force investigating organized crime. He was searched in front of several people, and he shouted desperately for whoever had cameras to film the arrest to show that he was not carrying anything illegal. A video by Karla Oliveira shows the moment of Hideki Harano's arrest and search:

Another video by The Activist Lawyers Collective, a group formed by lawyers who are in the streets defending demonstrators, shows police officers making a second search on Hideki Harano outside the subway station. The footage shows that nothing seems to have been found:

Lusvarghi, the other man arrested, had actually been arrested once before during the anti-World Cup protests in June. A video from a blog called Testemunha do Caos ("Witness to Chaos") shows four officers taking him down. In a detailed post about the protester, one of the site's bloggers reported his own eyewitness account:

At the end of the protest, people were dispersing, some walking down the street, others heading towards the tube. Behind a news stand next to Consolação station, a few police officers from the State Department of Criminal Investigations (DEIC) – Armed Group for Repression of Robberies and Burglaries (GARRA) forces ambushed and arrested Lusvarghi. A firearm was shot at least twice. The protester was thrown on the ground, while the riot police lined up to, in my understanding, “clean the street of people.” That said, the riot police also fired shots there, but they did not hit anyone. I was surprised that Lusvarghi had been charged with possession of explosives. He was not carrying any backpack, and was wearing a skirt with no pockets, so where was the bomb, stuck up in his ass?

The Activist Lawyers Collective has curated many photos of Lusvarghi throughout the demonstration to show that he had no bags or other items that could hold explosives, saying that the police were fabricating evidence:

However, in the same evening, at DEIC – the department responsible for investigating demonstrations – an explosive “appears” among both men's belongings. The charge is more than stupid, perhaps even criminal, i.e. a possible flagrant forgery by the civil police of the state of São Paulo.

The collective also offers a long report about the June 23 protest in English.

The group has described the arrests of Fabio and Rafael as very timely for the police. DEIC, the police department responsible for investigating “Black Bloc” protesters — who committed acts of vandalism during anti-government protests last year — has received criticism for not being able to produce sufficient evidence to support a criminal prosecutions against anyone. The collective accuses police of seeking out scapegoats to save face.

And while the mainstream media in Brazil have given attention only to the police version of the facts, demonstrations continue in São Paulo.

This story by Paula Góes was originally published on our partner Global Voices Online, a community of bloggers from around the world.