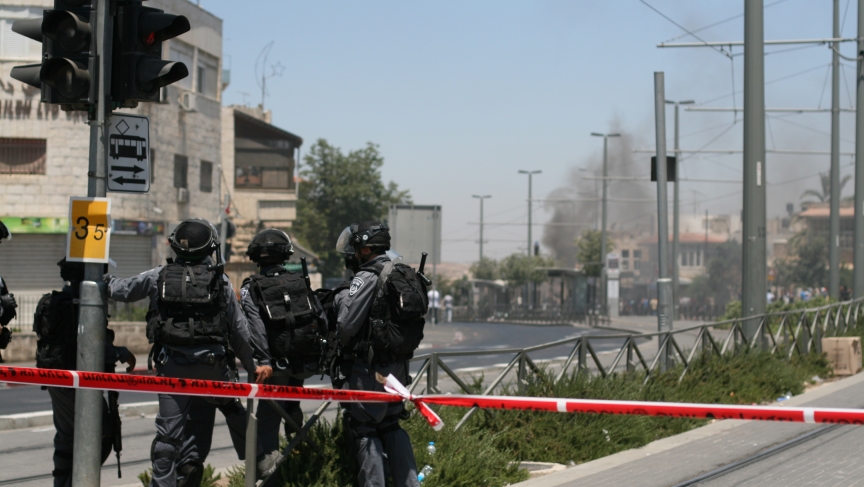 Tensions are high in the capital after 16-year-old Muhammed Abu Khdeir was was killed in an apparent revenge killing for three slain Jewish teens. Police watch as residents of the east Jerusalem neighborhood Shuafat set dumpsters on fire, throw rocks and hack apart train stops in anger.
Credit:

In Israel, the search continues for the murderers of three teenage boys whose bodies were found Monday near the West Bank city of Hebron. That search has led straight to Israel's longtime enemy, Hamas.

The Israeli government is sure that Hamas, the Islamic movement that runs the Gaza Strip, is behind the killings. Israel has made sweeping arrests in the last three weeks, pulling in hundreds of suspected Hamas members.

Israel has named two murder suspects so far. One is Marwan Qawasmeh, from a prominent Hebron family with long-standing ties to Hamas. In 2003, Israel assassinated Hamas' military chief in the West Bank. That was Abdullah Qawasmeh. All in all, nine Qawasmehs have been killed or died because of their attacks on Israel.

The Israeli army says 29-year-old Marwan is part of that tradition. He has been jailed five times and Israel says he admitted to being a member of Hamas, which used the caves around Hebron for military training.

On Monday, the Israeli army blew up Marwan’s home, part of a four-apartment complex in Hebron. His sister Rawan described the scene as she walked through the wreckage: “There was a very long fire. They [the Israeli army] refused to remove all gas canisters, so everything exploded.”

The fire destroyed the upstairs apartments of Marwan’s brothers, Bilal and Shareef. On Wednesday, his extended family shuffled between the courtyard and the house after two days of clearing rubble. The ceilings were held up by rusted metal pipes which were brought, Rawan said, by the Hebron municipality this week.

With 16 members of their family now homeless, the Qawasmehs are furious. They denied any possibility that Marwan would have become involved with the murder of the three Israelis.

“Marwan is married," his sister Rawan said. "He has a wife, a house. His wife is pregnant. It’s impossible to do this now. He is not a member of Hamas."

But what about the green Hamas flag flying on the roof? “We're not Hamas,” she insisted. “Some young kids came and put the flags on our house, and we don’t know why.” 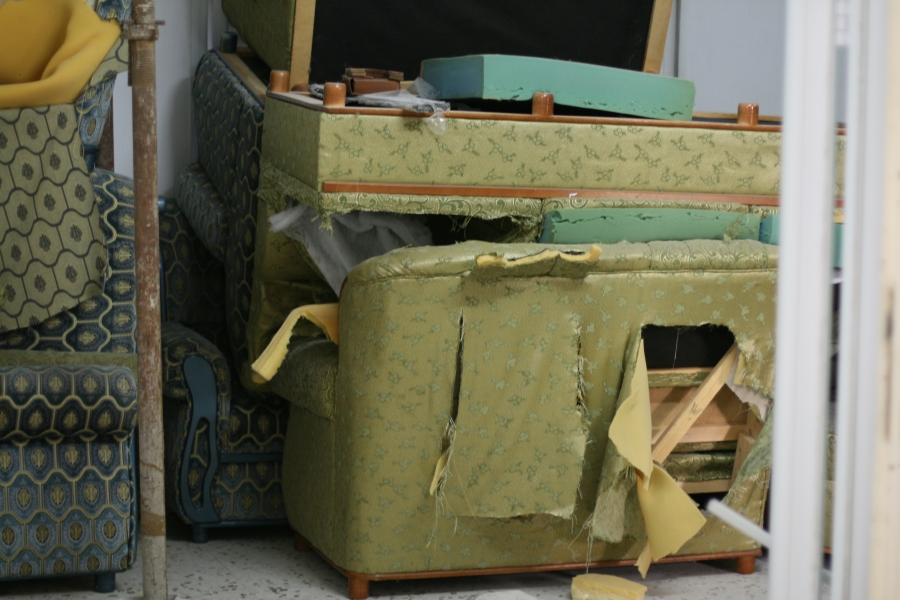 The Israeli army slashed through each couch in the Qawasmeh home searching for evidence tying suspect Marwan Qawasmeh to the triple murder of three teens. The Qawasmehs have a long history with Hamas, but relatives say Marwan is innocent.
Credit:

The Israeli army said it hasn’t released all the evidence that points conclusively to Qawasmeh. Even so, they said, why else would he and his fellow murder suspect, Amer Abu Aisheh, have disappeared since the kidnapping?

Regardless of who murdered the teens, Israeli officials said they hold Hamas responsible — and that Hamas will pay. But Asad El-Ewaiwi, a Hebron University political science professor, said it isn’t far-fetched to think that Hamas had no knowledge of the attack.

“What could have happened with the kidnapping is that a group creating mutiny against Hamas, a group splitting from Hamas, is cooperating with groups that are more extreme,” El-Ewaiwi said.

El-Ewaiwi believes the kidnapping is bad for Hamas. The group was bouncing back after years of being ostracized and under-funded. It recently ended a seven-year rift with its political rival, Fatah. And El-Ewaiwi said Hamas was actually looking forward to a period of calm to rebuild itself. But now, Hamas is in a bind. It doesn’t want to claim responsibility for murders it didn’t carry out, but the leadership can’t condemn the killings, either.

“If Hamas were to condemn this act, it would lose popular support,” he said. “Hamas basically is a resistance movement and always moves in that direction; hence it cannot condemn.”

Hamas has fired dozens of rockets from Gaza over the past week, and Israel has responded with punishing airstrikes. Both sides have vowed revenge, though both have also pledged to uphold a ceasefire — as long as the other side does.

Editor's note: This story was updated to clarify that nine members of the Qawasmeh family died or were killed because of their involvement in attacks on Israelis.