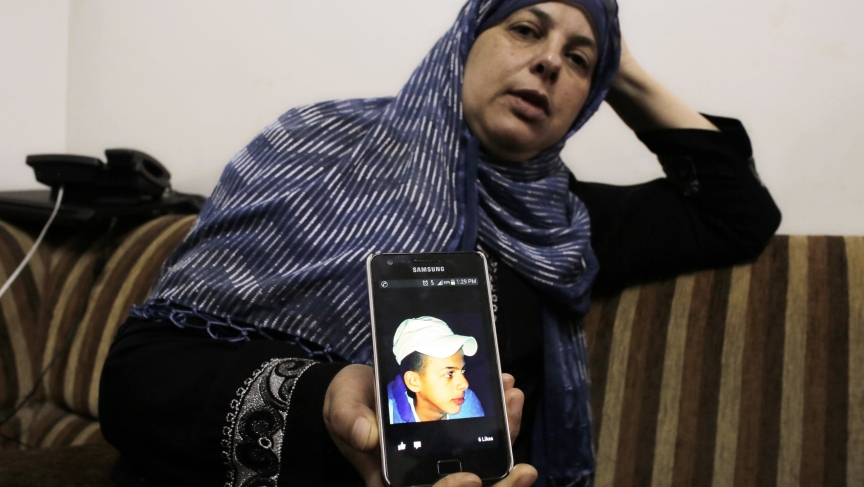 Suha, mother of 16 year-old Mohammed Abu Khudair, shows a picture of her son on her mobile phone at their home in Shuafat, an Arab suburb of Jerusalem. News of the discovery of Mohammed's body sparked clashes on Wednesday between rock-throwing Palestinians and Israeli police.
Credit:

The Israeli-Palestinian conflict can often feel like a perpetual simmer, bubbling away year after long year. But there are suddenly moments when things appear to boil over — moments like the one happening right now.

Early on Wednesday, a 16-year-old Palestinian boy named Mohammed Abu Khdair went missing. He was last seen being forced into a vehicle in the East Jerusalem neighborhood of Shuafat, where he lived. Soon afterwards, Mohammed's body was discovered by Israeli police in the forest outside of the city.

Official confirmation of the boy's death did not come right away. Israeli investigators urged patience, but the Palestinian public, fueled by news reports and statements from public officials, made up its mind very quickly.

For Palestinians, the killing of Mohammed was an act of murderous revenge, pure and simple. Palestinians are convinced the murder was carried out by Israeli extremists as retribution for three Israeli teenagers abducted and killed in the West Bank last month. The hunt for the boys, whose funerals were held yesterday, consumed Israel during the two weeks they were missing.

Clashes between Israeli security forces and Palestinians in Jerusalem erupted on Wednesday and went on for most of the day. By evening, dozens of Palestinians were reported injured, but there was no apparent letup in the violence.

To give you a sense of how many rocks were thrown at today's all-day protest in Shuafat: pic.twitter.com/oqfo5hICGP

Israel blames Hamas for the killing of the three Jewish seminary students — Naftali Frenkel, Gilad Shaar and Eyal Yifrach. During the search for the teenagers, Israeli security forces arrested hundreds of suspected members of the Palestinian militant group across the West Bank.

The Israeli military has also carried out dozens of air strikes in Gaza since the discovery of the bodies of the three students. On Wednesday, several retaliatory barrages of rockets and mortars were fired at Israel from the Gaza Strip.

5 rockets fired from Gaza into Israel's negev region. No damage or injuries from the strike. Police step up patrols in the south.

Hamas, which controls the Gaza Strip, has not claimed responsibility for the kidnappings, but its leaders have praised the abduction. And today, Hamas was quoted telling Israeli leaders that they “will pay the price” for the death of Abu Khdair.

As the violence appeared to spin out of control, the voices urging restraint included the father of the murdered Palestinian teenager and family members of one of the Israeli victims.

But there have also been calls for revenge. A group of Israelis launched a Facebook page demanding revenge against Arabs for the murder of the three teenagers, which earned over 35,000 likes.

Sheera Frenkel, a Middle East correspondent for BuzzFeed, witnessed an apparent revenge attack at a Jerusalem gas station. “I've never actually seen it quite this tense, at least in the eight years or so that I've been here," Frenkel said during an interview with PRI's The World. "It seems as though both sides are calling for revenge at levels that, as far as we know, they haven't called for since the second Intifada.”