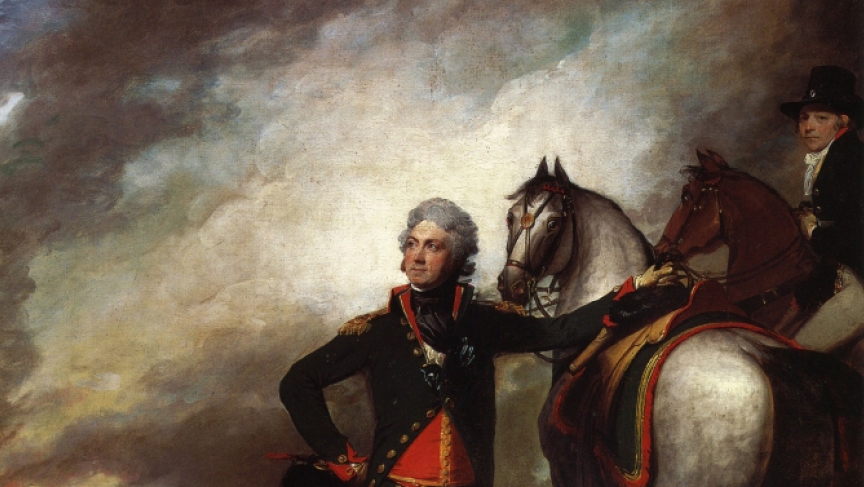 Louis-Marie, Vicomte de Noailles, in 1798. A portrait by Gilbert Stuart of Philadelphia.
Credit:

This Fourth of July, spare a thought for the French. Yes, the French.

The tragic life of one liberal French aristocrat illustrates the importance of the relationship between France and the early United States.

Louis-Marie, Vicomte de Noailles, had just turned 19 when the first shots were fired at Lexington and Concord in 1775. And like his friend, and future brother-in-law, the Marquis de Lafayette, Noailles was electrified by the news from America. They both caught the revolutionary bug.

Noailles was a member of one of France’s noblest families. “The family had served the King of France for centuries,” says historian Francois Furstenberg. Furstenberg has a new book coming out profiling Noailles and four other key French personalities. It’s called "When the United States Spoke French: Five Refugees Who Shaped a Nation."

“The family had traditionally been soldiers and served in the army,” says Furstenberg. The young Noailles was no exception.

He tried to go to America as a volunteer, like Lafayette. But the French authorities stopped him. They wanted to preserve the impression of neutrality.

That neutrality was a lie, a diplomatic pretence. France began smuggling arms and money to the rebels as early as 1776. These supplies were critical to helping Washington’s army survive its early defeats and the grim winters at Morristown and Valley Forge.

Then after the British defeat at Saratoga, the French openly joined the war. Noailles was an officer in the French army and fought in numerous campaigns in America and the West Indies. He served in the disastrous siege of Savannah, and in the decisive siege of Yorktown in Virginia in 1781.

The victory at Yorktown would not have been possible without the French. French money and credit paid for the campaign. French troops made up half the army there. French military engineers largely directed the siege. And most importantly the French navy repelled the British navy’s attempt to rescue the besieged British army.

As an aristocrat, Noailles was promoted quickly. At Yorktown, despite being just 25-years-old, Noailles was entrusted with negotiating the surrender of the British, along with American, John Laurens.

Noailles didn’t just serve quietly during the American Revolution. His enthusiasm for the ideals of the revolution got deeper.

He made the effort to learn English and became firm friends with leading American figures like Laurens and Alexander Hamilton. He continued to correspond with Hamilton and others long after the war.

The war cost France deeply, and this gave Noailles and his friends the chance to push a revolutionary agenda at home, when the King was forced to summon a parliament, or Estates-General, to raise money for the first time since 1614. Noailles became a leader of the French Revolution.

“In fact,” says Furstenberg,”he was the president of the constituent assembly on the night of August 4th 1789 when feudalism was formally abolished; when feudal privileges were revoked."

But when the French Revolution became more radical, his aristocratic family was persecuted. Noailles’ parents were executed, and he himself had to flee.

In 1793 he ended up back in America, and like thousands of other French refugees he gravitated to Philadelphia, which was then the capital of the United States.

Furstenberg says this French community transformed Philadelphia into one of the most cosmopolitan and sophisticated cities in America.

“Noailles had been (Queen) Marie Antoinette’s dance partner,” says Furstenberg. “He was one of the most famous dancers in the court of Versailles. So people like him give dance lessons to Philadelphia’s elite. They give French language lessons.”

The French brought in all kinds of new goods and services. “A hairdresser who’d trained with Marie Antoinette’s hairdresser came to Philadelphia and hawked her services. Actually (it was) a French dentist (who) made George Washington’s false teeth.”

The refugees also brought in useful political and mercantile connections with the rest of the world. These connections proved immensely important in the dangerous diplomatic waters that engulfed the world in the 1790s and 1800s. Furstenberg points out that at this time the United States was a “puny” power on the global stage. France was one of the world’s leading superpowers.

As for Noailles, he had a successful career as a banker in Philadelphia and accumulated a small fortune. However, he was always first and foremost a soldier. When Napoleon came to power in France, he appealed to the exiles to return. Many did so.

Noailles resumed his military career, and served in France’s ill-starred expedition to re-conquer its colony of Saint-Domingue, now known as Haiti. He himself served with distinction but the campaign was a disaster. Tens of thousands of French soldiers died, mostly from yellow fever, as they fought to re-enslave the Haitian rebels.

Rather than surrender, Noailles evacuated his troops to Havana, Cuba, and immediately took command of a ship to fight the British at sea. He succeeded in surprising and capturing a British warship. But he was wounded and his injuries proved fatal. He died in Havana on January 7th 1804, aged 47.

Noailles’ name is immortalized on the Arc de Triomphe in Paris.