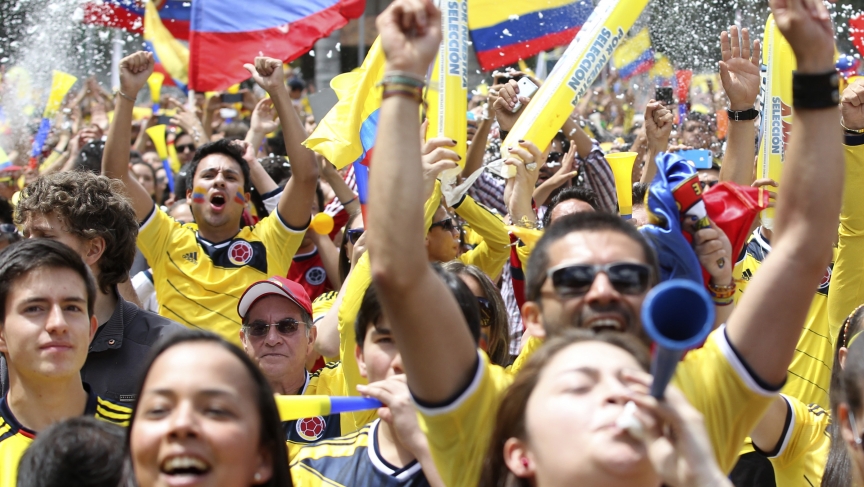 Colombia fans celebrate as they gather before the World Cup Group C soccer match between Colombia and Greece. After the 3-0 win, nine Colombians died in the alcohol-fueled postgame parties.
Credit:

In its opening match at the World Cup last month, Colombia beat Greece 3-0. The team’s victory set off wild, drunken street parties that got completely out of hand.

Fed up, officials in officials in Bogota and several other cities implemented a hard-line solution: ban alcohol when Colombia plays its World Cup matches.

So when Colombia defeated Uruguay 2-0 in the World Cup's first knockout round, it was a group of mostly sober fans who gathered to watch the game in a Bogota park. In one respect, the ban worked: there were no soccer-related deaths after the match.

“People have been very well behaved,” said police officer Carlos Holguin, who was assigned to a keep an eye on the crowded park. “There were only about a dozen fights this time, compared to 3,000 fights after Colombia’s first game.”

But some people were furious. This is Colombia’s first appearance in the World Cup since 1998. It’s been a long wait, and many bar and restaurant owners were gearing up for crowded viewing parties and big profits. Some hired extra bartenders and waiters, and upgraded their technology.

At the Habana 93 bar, manager Juan Carlos Hernandez installed new TVs, a sound system and a movie screen ahead of the World Cup. They cost about $4,000 in total. But since the bar can’t serve alcohol, people have stayed away in droves. Hernandez says he never would have made the investment had he known about the dry law.

At a nearby pizza parlor, the business was equally grim. “We thought the World Cup would mean much more business," said manager Raul Hoyos, "but our sales have fallen 30 to 50 percent.”

Soccer hooligans plague many countries, but the brawls usually pit the fans of one team against those of another. Colombians are all cheering for the same side — so why would they turn on each other?

“I don’t know," said Mary Castro, who waits tables at a Bogota restaurant. She thinks the problem is that soccer glory is such a rare occurrence for Colombia.

“This is the first time we’ve qualified for the World Cup in 16 years,” she pointed out. “People just get too excited and don’t know how to control themselves.”

History gives her some support: In 1993, Colombia scored a major upset by blowing out Argentina 5-0 in a World Cup qualifier. The post-game celebrations turned ugly and 60 people were killed.

Whatever the reason, many Bogotanos tell me they support the dry law. “It may hurt business,” said high school teacher Miguel Valdivieso. “But it’s good for the city because it saves lives.”