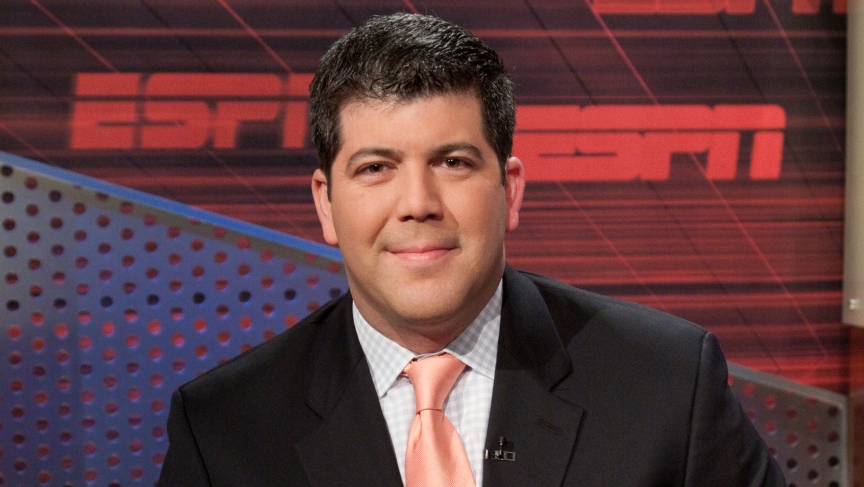 Fernando Palomo is one of the announcers at the World Cup.
Credit:

If you have watched the World Cup games this year, you might recognize the voice of Fernando Palomo.

Palomo is one of the play-by-play announcers on ESPN. While he's calling this year's World Cup in English, his first language is actually Spanish.

Palomo grew up in El Salvador and began his broadcast career there.

It's only recently that he started doing soccer play-by-play in English. His first game was little more than a year ago in Phoenix, Arizona, when Denmark played Mexico.

“I was as nervous as nervous can get," he said. "If I could, I would’ve scripted all scenarios possible for all 90 minutes of the game so I didn’t stumble, but it’s a learning process."

Palomo has been working in broadcasting since he was 16. He first went with a television crew to cover the 1988 Olympics for his home country of El Salvador.

From then on he was hooked, carving out a sportscasting career in his native tongue.  When he joined the team at ESPN he decided that he wanted to try working in English.

“I come from having called games in Spanish for a long time and I have my own style and I try to bring that along into English," he said. "But I realize it’s something that I can’t do right off the bat — that I needed to morph both styles and try to become one Fernando Palomo in English and one in Spanish, although having one common aspect with both of them, which is passion."

For anyone who has listened to a Spanish-language soccer broadcast, passion is definitely an element of Spanish play-by-play. Even if you don’t speak the language there is an energy that’s infective, just think about that elongated cry of “gooooal!” called out each time a point is scored.

When switching from Spanish to English, Palomo says there are words that just don’t translate. One Spanish word that Palomo uses that’s become popular is the term “zapatazo”

“Everytime somebody shoots from outside of the box, I say in Spanish “zapatazo” in a very loud voice,” said Palomo, “Zapatazo means a big shot with your shoe, it just doesn’t translate.”

But it's not just words that don't always translate. Sometimes cultural references can mistranslate as well. We recently interview Felix Sanchez, co-founder of the National Hispanic Foundation for the Arts, about his concerns about how Univision’s Spanish language broadcasters talked about players on air during this World Cup.

“Most recently was a characterization related to an Afro-Costa Rican player describing him not by his last name but by the color of skin, calling him ‘moreno,’” Sanchez said.

But not everyone agreed with Sanchez.

One listener, Jesse Dhillon, wrote in and said:  "The point of Univision is to reach people who participate in the Latino culture, in the US market. They're not using racial slurs to refer to players; they're using familiar nicknames. The bottom line is that you can't translate into US English what they're saying, without losing something important."

Palomo does not announce for Univision, and he doesn’t use nicknames for players while broadcasting with ESPN, but he points to the culture behind this type of broadcasting.

“We in Latin America call each other by our nickname and sometimes our nicknames are given by our skin color, our hair color, our height, and it’s not offensive when you do it in the context of the Latin American culture,” said Palomo, “Now understanding where broadcasters in Spanish reach, which is the US Hispanic market, that’s a whole different culture. You can’t just translate one thing said in Spanish into English without losing a lot of the background in the middle.”

There’s still a week left of the World Cup.  While Palomo doesn’t know if he’ll be calling any more World Cup games, he dreams about doing play-by-play for another Brazilian match.

“In the nation that considers the sport a religion more than a sport itself, and you’re in there with 60,000 worshippers watching their 11 gods on the field, that’s the most amazing sport experience as you can live,” Palomo said.