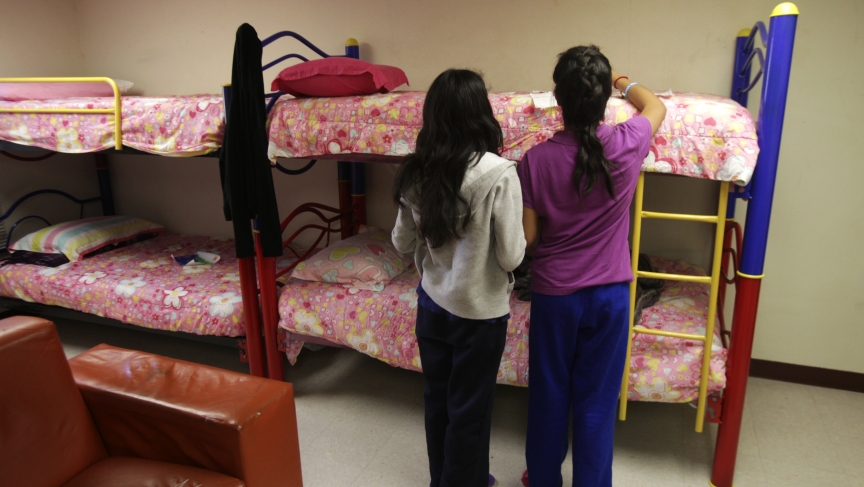 Girls stand in a dorm at the shelter for underage immigrants and repatriated minors in Ciudad Juarez, Mexico.

There is no free pass for unaccompanied minors who flee across the Mexico border into the United States.

Still, just since October, some 52,000 unaccompanied minors have been caught trying to enter the US illegally. This humanitarian crisis has caught the attention of the United Nations. Leslie Vélez, a senior protection Officer at the UN's High Commissioner for Refugees wrote a report, "Children on the Run," about minors fleeing into the US across Mexico's border.

Vélez say criminal gangs in Central American countries are increasingly threatening young girls, who are compelled to make the risky cross-border trek ‚ or else.

"To use the term 'gangs' may be outdated," Vélez says.  "To me, it conjures up images of  the Bloods and Crips in the United States, or renegade youth, when it's I think a lot more than that."

Central American gangs that used to be merely menacing, now deal in death on a regular basis. And their reach is transnational. The teens who are pressured to join the gangs have few options.

"There was one boy who told us that he actually didn't want to come. He didn't want to make this journey coming to the United States because he didn't want to leave his mother alone," Vélez says. "But his younger sister, who was only 12, had already been attacked and his mother begged him to go and make sure she was protected on what is already well known as a very dangerous journey. And so he did that. But he was extremely sensitive and scared about what was happening with his mother, since he wasn't there to protect her."

Some parents, it seems, are pressuring their children to make the cross-border journey despite the risks.

"One mother ... framed it as, 'I'd rather my child died en route to some form of safety than at my doorstep.'" Vélez says.

But the undocumented minors are a major stress on the US immigration system.

"The system right now is extremely tested given that it [processed] 52,000 [unaccompanied minors] in the last six months for a system that was prepared to handle at a maximum 8,000 over the course of a year," she says.

Still, it's worth remembering the 52,000 children attempting to enter the US are dwarfed by what many countries in the Middle East face right now.

"To put that in a global perspective, 10,000 children in one month here in the United States — were're talking about 10,000 people crossing the border into Jordan every day," Vélez says. "Lebanon is a country of four million inhabitants and it's currently hosting one million refugees. There are other countries, I think, that the US has advocated for them to be open door hosting countries to allow refugees to be in there, while more durable solutions can be looked for.  nd so I just hope that the United States lives up to its leadership in refugee protection."