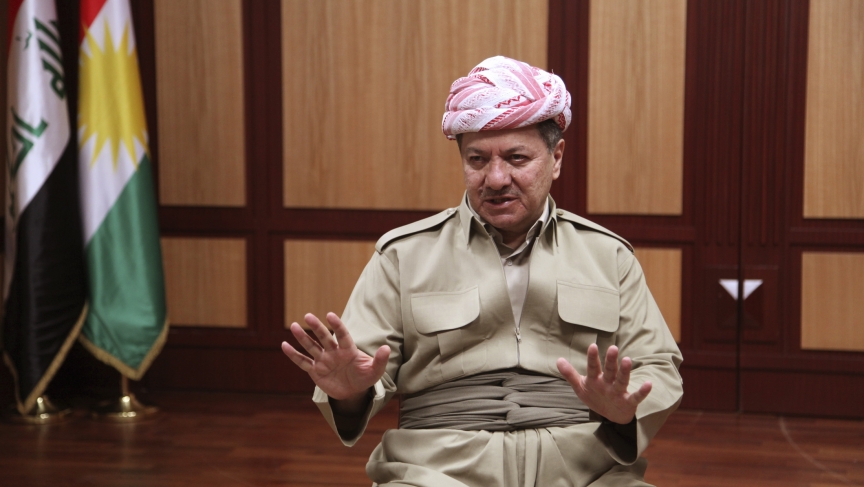 Kurdish Regional Government President Masoud Barzani, during an interview with Reuters in Erbil, in Iraq's Kurdistan region May 12, 2014, said Iraq had been led in an authoritarian direction and threatened to end the oil-rich autonomous region's participation in the federal government.

US Secretary of State John Kerry is clear about his goals in Iraq. He says a “united Iraq is a stronger Iraq.”

After meeting with President Nouri al-Maliki in Baghdad Monday, he took that talking point up north on Tuesday for meeting with Kurdish leaders in the city of Erbil.

The response? A talking point of their own. Kurdish leader Masoud Barzani told Kerry that there's now a "new reality and a new Iraq."

Strong words from a man who knows he has an opportunity to make the Kurdish region an independent country. GlobalPost reporter Susannah George, who is in Erbil, says the Kurdish region is key to Iraq's future. And the Kurds are a really important piece in the puzzle that is Iraq for the US and other western powers. “The US is worried that if the Kurds break away and declare independence it will be next to impossible to keep the rest of Iraq together,” she says.

Barzani also told Kerry that trying to push for a multi-sectarian government to rule all Iraqis with equality is a huge problem. In many ways you can assume that Barzani is telling Kerry that a pluralistic Iraq is impossible. And that Kerry ought to find a Plan B. And that Plan B better allow for an independent Kurdish region to govern itself. George says that, for the Kurds, there is almost no positive for staying with Baghdad. “Besides an idea of national unity that few Kurds have,” she adds.

George says it’s important to note the Kurds have been longtime friends of the US. You can see this when you study the body language between Kerry and Barzani, and Kerry and Maliki. The first is relaxed and friendly. The latter is stiff and formal. But George cautions there are some tensions. She says many Kurds believe they’ve received false promises from Western powers over the years. And each time they get closer to a bid for independence, they lose Western and international support.

George says there is across the board support for independence, at least, from the people she talks with on the street.

Iran is another country opposing the Kurdish bid for independence. George says that once the US security forces left the country, the Maliki government cozied up to Tehran. The two governments are close. After cities across the country began to fall to Sunni insurgents, top Iranian military advisers visited Baghdad. She says a common saying in Iraq is the “US may have won the war but Iran won the peace.”

It’s a tricky diplomatic dance. The US wants Iraq to stay whole. But so does Iran — not a country whose interests often align with the US. The stable region, the area controlled by the Kurds, wants independence. But the US fears such a move would cause Iraq to break apart. But it’s easy to see that Iraq is already breaking apart. So the hope is to create a pluralistic Iraq during new parliamentary elections set for next week. But all sides say such an Iraq is impossible. Throw in a militant force that is gaining ground and a foothold across the country and it’s nearly impossible to see where this will end. But George says one thing is clear:

“It’s becoming harder and harder to imagine how Iraq could stay a single, unified country.”