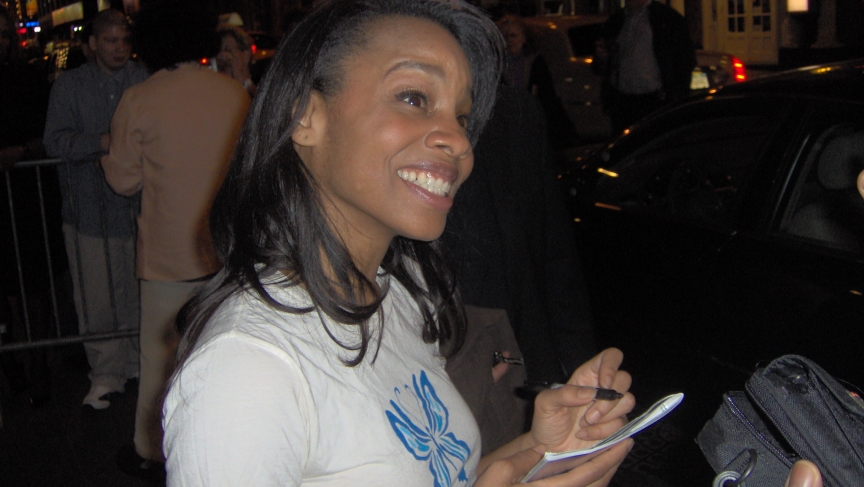 Anika Noni Rose has done it all — from being an animated Disney princess to winning a Tony award for her live theater work.

In 2004, Anika Noni Rose won a Tony Award for her role in the play Caroline, or Change. But more people probably know her voice than her face: in 2009, she played Princess Tiana in The Princess and the Frog — the first major role for a black actress in an animated Disney film.

Rose is currently starring on Broadway alongside Denzel Washington, playing the role of Beneatha Younger in a revival of Lorraine Hansberry’s A Raisin in the Sun. She was nominated for a Tony Award for her performance. She also starred in the recent film Half of a Yellow Sun, based on a novel by the same name about the Nigerian civil war, written by Chimamanda Ngozi Adichie.

Rose says she was late arriving at her love for acting and performing. But once she discovered it, there was no going back.

“I did a musical in my high school and I was on stage and I said, ‘Oh my, this is it!’’ Rose recalls. “I stopped doing everything else. I stopped running track, I stopped playing instruments — everything went 'Screeech!' Nothing has felt like this.”

Rose trained at the American Conservatory Theater in San Francisco and moved to New York soon after.

“My goal was to take Broadway by storm,” she says. “I loved being on stage and I loved doing musicals, but I [also] wanted to do film.”

After some typical young-New-York-actor struggles, Rose became involved with Caroline, or Change by Tony Kushner, when it was still being developed.

“I have to say that I am in love with Tony Kushner,” Rose says. “I love him! I love his brain. I love the way he sees people. I love the fact that he is smarter than any person in the room at any given time, but he never makes you feel that way. And he writes amazing women. I knew once we started that I was going to take that as far as I could take it.”

She took it all the way to a 2004 Tony Award for Best Actress in a Featured Role in a Musical. Soon after, Rose landed roles in a couple of big films, including Dream Girls and For Colored Girls.

In Half of a Yellow Sun, Rose plays a character named Kainene.

“I think she's an amazing woman,” Rose says. “She's extraordinarily smart and strong and she's a survivor — a woman in war, which is a time when women are more vulnerable than any other time. From The Rape of the Sabine women on, we are always ‘the commodity.’ We are always something with which to trade, as we are looking at now with Boko Haram in Nigeria.”

But Keinene is not willing to be the pawn, says Rose. She finds a way to survive and to make sure her family survives. “She is the one to make it happen,” says Rose. “In spite of all of these men around who are pontificating, she is quietly making things work.”

While she clearly does "serious" — and does it well — her career has also included animated work. In some ways, she may be best known for the voice she's given to some of those animated characters. She is known to millions of children as Princess Tiana, and to viewers of The Simpsons as Grandpa Simpson’s songwriting partner and long-lost love, Rita LaFleur.

“I love voiceover work,” Rose says. “I can tell you that was the thing that I first wanted to do. And I was a kid, so I didn’t even think of it as acting! I just knew I wanted to be in a Disney film.”

That’s checked off the bucket list, but she’s not finished.

“I’d like to do something that is less iconic,” she says. “Something I can be a complete idiot while doing. I want to be a leaf on a tree that’s about to fall because the seasons are changing and she’s petrified all the time. I want to be a superhero. Or a villain. I want to fly, bite somebody in the neck, and then kick somebody else! I've always found [those things] to be just ridiculously fun-looking.”

Editor's note: An earlier version of this story contained a photo of the wrong actress.