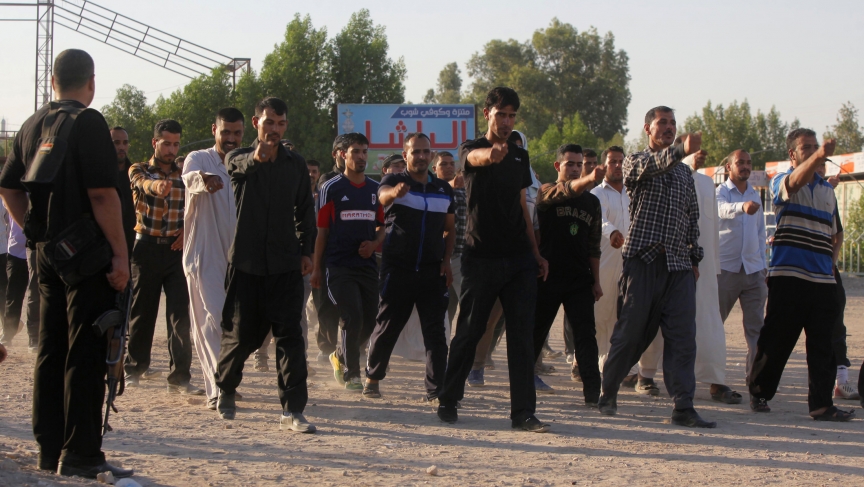 The rapid advance of ISIS Islamic fighters in northern Iraq is rattling foreign capitals. And one reason is that some fear much of the Middle East could spiral into war.

"I think what's really worrying to me is not just what's happening in Iraq," says Dexter Filkins, staff writer for The New Yorker. "We're beginning to see, and I think we will see, a regional war taking place."

Filkins has reported on the region for many years. He was in Iraq when the US invaded with its infamous Shock and Awe campaign.

"You're talking about a big, long, sectarian war that stretches across the middle of the Middle East," he says, "from Iraq through Syria to Lebanon."

He says a legacy of both the US war in Iraq and the civil war in Syria is that borders between the countries have completely collapsed, allowing extremist groups to move back and forth at will.

There are two main groups, Filkins says — Jabhat al-Nusra, which is operating now mainly in Syria, and the Islamic State of Iraq and Syria, or ISIS, which has made big gains in Syria and recently took over parts of northern Iraq. Both Sunni Muslim groups were created by former members of al-Qaeda in Iraq, he says, who "were essentially all but wiped out during the American war. There was a handful of them that were left [and] these were kind of the survivors."

They went into Syria. Because the border between Iraq and Syria has virtually disintegrated due to war and instability, he says, Jabhat al-Nusra, ISIS, and other extremists have been able to easily join forces and support each other, crossing between the countries.

"ISIS and the al-Nusra Front are running back and forth and fighting on each side. ISIS has carried out bombings in Lebanon, which is a very weak state that has been flooded with Syrian refugees." And Filkins thinks soon Iran will get involved in the conflict to help the Iraqi government, which is mainly Shiite like Iran, combat the militants that are aligned with Sunnis.

Filkins says the current situation was disturbingly predictable. "[Iraq Prime Minister Nouri] al-Maliki, ever since the Americans left, has begun a very sectarian project," says Filkins. "He has taken most of the power in the country for himself, he's oppressed and done mass arrests of Sunnis across the Sunni heartland in the north and west of the country. He's basically marginalized them politically, and so that's opened up the space that these extremists are kind of moving into."

Al-Maliki will likely turn to the Iranians for support against ISIS and its Sunni allies, he says. And that should be no surprise to al-Maliki's American backers, since "he is Shiite sectarian to the core, and he's been that way for most of his adult life, long before the Americans even got to Iraq."

Filkins says this may not immediately threaten Americans, but the conflict is creating a huge, ungoverned area between Aleppo in Syria and Mosul in Iraq, which "is very rapidly coming to resemble what Afghanistan was before 9/11, and that is a kind of big sanctuary for the most pathological extremists that Islam can produce," he says.

And many of the jihadist fighters, he argues, are not locals. "There's about 7,000 Sunni jihadis, foreigners, who are fighting against the Assad government [in Syria], including those from the United States, Germany, the UK and France."

Filkins adds that, because these jihadis are from the West, many of them have passports and will likely return to their home countries.

"That's a pretty terrifying prospect," he says. "Terrible things happen to people when they go to war, and these guys are already at the far end of the spectrum in terms of their religious and political extremism. These groups may not be threatening the United States today, but there's no way we can safely ignore this absolute cataclysm that's happening in the middle of the Middle East."

The foreign jihadis currently aligned with these extremist groups, says Filkins, are not "know-nothings" — many are sophisticated, educated, and have access to Western travel documents, much like Mohamed Atta, who helped carried out the 9/11 attacks.

"It's pretty terrifying — we've seen this movie before, we know how it ends. And it's starting again."