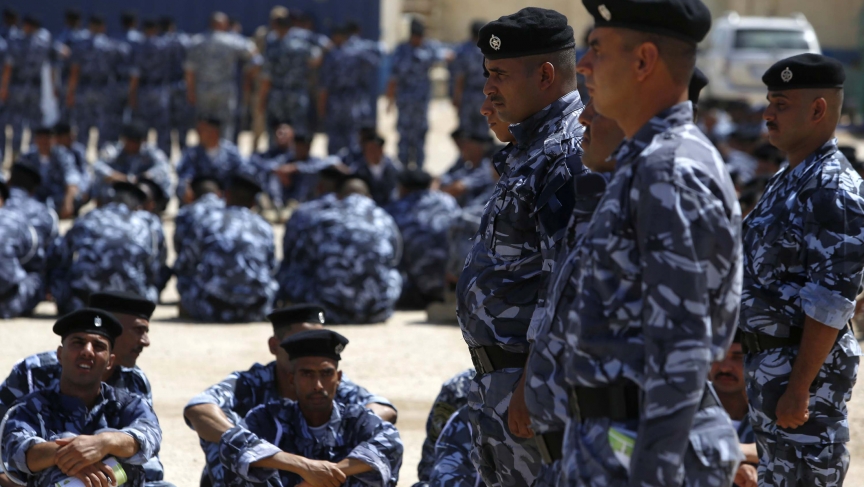 Volunteers have joined the Iraqi security forces to fight against the predominantly Sunni militants from a radical Islamic group (ISIS) who've taken over parts of northern Iraq.

Iraq is on the edge again. On the other side, perhaps civil war, or maybe even the disintegration of a country.

Yes, American troops are out, but the current crisis has already prompted the White House to think about how to get involved again. We asked for you to tell us what questions you have about the current situation in Iraq.

Mark Putzke asked us: "What will happen if ISIS reaches the green zone?"

The Green Zone is the heavily fortified area of Baghdad where the sprawling US embassy is located, and also many Iraqi government offices and foreign embassies. Mark's question is a great starting point, because the militant group ISIS is threatening the Iraqi capital, and President Barack Obama just decided to send nearly 300 US troops to Iraq to protect the embassy and other American diplomatic posts.

Residents of the city are on edge, for sure. On Tuesday, they heard news that four bullet-ridden bodies were discovered in a Shia neighbourhood. The victims are believed to have been Sunnis. Rod Nordland, a reporter for the New York Times in Baghdad says the mood in Baghdad is tense.

“People are concerned. They’re not panicking yet. A lot of Shia people are organizing themselves into volunteer militias. A lot Sunnis are worried about a possible blow back from the Shia,” he says.

Nordland points to the killings that were reported in Baghdad today and believes it has the hallmarks of sectarian violence.

“There have been a lot of sectarian killings in the past few months. The Islamic extremists are killing people just because they are Shia,” he adds.

Nordland says what we hadn’t seen until now in Iraq is a blowback from Shias responding by killing Sunnis. That’s something, he says, people fear — and unfortunately it seems to be taking place.

As for Prime Minister Nuri al-Maliki, Nordland says he is not doing what could help resolve the issues.

“He is not doing anything that people have been encouraging him to do to try and resolve things. Both America and Iran have publicly urged him to try to get some kind of reconciliation going with Sunnis in the country. And he has refused to do that,” Nordland explains.

Back to Square One

Nordland says Baghdad has yet to turn into a complete chaos, but it might not be long before the situation dramatically deteriorates there.

Over the past decade, the Iraqi capital has lived through many perilous moments.  Ayub Nuri lived in Baghdad after the US invasion. He's an editor with the Kurdish news service, Rudaw, now living in Toronto. Nuri says at first after the invasion, Baghdad actually felt safe.

"It was enjoyable working there for the first two years [after] the invasion, because there was major change and I could see the rest of the country and travel around. But it became too dangerous for me and many people — millions of people who left the country. It was impossible to work safely, or even go for a walk safely. And now, it's happening again," he adds.

"We are back to square one, basically. Today, Iraq is like 2007 at the peak of the sectarian violence."

Nuri says it's sad going back to what it was like 10 years ago. "I think, one way or another, the international community, the Iraqi leaders and everyone should sit down with these Sunnis and see what they want. You cannot ignore them any more. Even if you suppress them today, in a few years time there will be another al-Qaeda affiliated group answering people's demands and creating more trouble," he says.

More than half-a-million Iraqis have fled their homes in northern Iraq. Many are soldiers who have abandoned their posts, but not for the reasons expected.

Iraqi soldier Yasser deserted his post in Mosul last week saying he had no choice after his superiors fled mid battle. Yasser shows off his cobra tattoo which he says represents his bravery. He believes his commanders betrayed him and were paid off by the militants to ease their territorial gains across northern Iraq.

They're not ashamed, says Susannah George, who met with a few soldiers who deserted their posts. "They're actually proud of themselves and they bragged about their bravery."

George is a reporter for Global Post. During her interviews, she discovered that the men fled because they felt "their commanders betrayed them. The deserters heard that the commanders were offered large amounts of money to flee. Others were promised prominent government positions should ISIS take over."

But, cautions George, those are rumors. Many of those who defected told George that they're "itching to get back to the battlefield. They are feeling guilty for not being able to protect their families who still live in the conflict areas. And just waiting to re-enlist."

Whether al-Maliki will welcome these deserters with open arms is unknown. He's called them "weaklings and cowards” and has threatened to execute deserters.