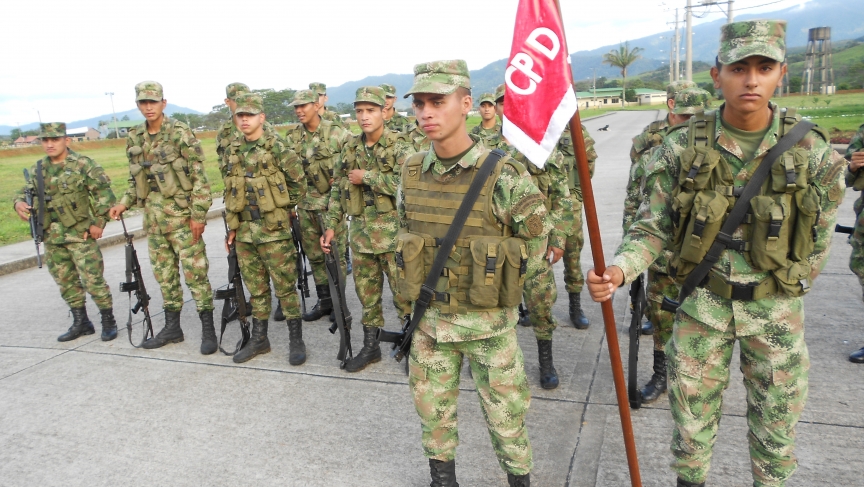 Young Colombian army troops drill in the southern town of Uribe, which used to be a FARC stronghold. Some are draftees serving their obligatory 18 months of service. Others are professional soldiers. Most come from humble backgrounds.

In 2012, the son of Colombian President Juan Manuel Santos did something that stunned the nation. He began his year of obligatory military service.

It marked the first time in modern Colombian history that the son of a president had joined the army.

In a speech, President Santos said “it’s an immense honor to deliver our youngest son, Esteban, to the glorious Colombian army.”

Every year, thousands of Colombians are drafted into the army, which has been fighting Marxist guerrillas since the 1960s. But the biggest sacrifices are made by the nation’s underclass; just as poor Colombians fill out the ranks of the guerrillas, they also make up the vast majority of army draftees. Young men from middle- and upper-class families usually avoid the draft. Many secure college or medical deferments. Others pay bribes for a military ID card certifying they’ve done their duty.

Andres Gutierrez, who I met at a Bogota park where he was trying out for a reality TV show, told me that he’s saving up about $1,500 to bribe a military officer for the draft card. He needs it to get a full-time job because employers almost always ask to see it.

That’s not an option for Colombians who are just scraping by. Juan Carlos Niño, who is 31 and works for an Internet company, grew up in a poor household on the outskirts of Bogota.

“I reported for duty because I didn’t have the money to buy my way out of the army,” he says.

Some see the military as a jobs program and a way to move up in the world. But others are virtually press-ganged into service through army sweeps of poor neighborhoods. Bryan Ramirez, 20, says he was picked up in one such sweep and held for 24 hours without food or water. He was released with a strong warning to report for duty.

“I live with my mother and help pay her expenses,” Ramirez says. “If I leave, she will be all alone but the army doesn’t understand that. It’s very unjust.”

There are other glaring inequalities. For example, draftees with high school diplomas are assigned desk jobs in the military. Dropouts, who often come from poor families, are eligible for combat.

Now, the draft and the war’s uneven burden have worked their way into the presidential campaign. President Santos faces a stiff challenge from a conservative candidate, Oscar Ivan Zuluaga, who has criticized peace talks the Santos government launched with the FARC rebels.

In turn, Santos has been warning voters that a Zuluaga presidency would mean an endless war, one in which the poor would continue to do most of the fighting.

In one TV commercial, Santos asks middle-class parents whether they would allow their sons to go off to war. All of them answer: “No.” Santos replies, “If that’sthe case, the peasants and the poor will have to supply the dead, injured and mutilated. That’s what we’re saying when we vote in favor of war. It’s so easy to fight with other people’s children.”

Critics say Santos is exploiting the fears of parents in the run-up to Sunday’s runoff election. Gen. Jaime Ruiz, president of the Colombian Association of Retired Military Officers, points out that Santos was defense minister before winning the presidency in 2010.

“If he was so concerned,” Ruiz says, “Santos should have already reformed the military draft.”

Santos now insists he will. He says if he wins re-election and signs a peace treaty with the rebels, the draft will be abolished.