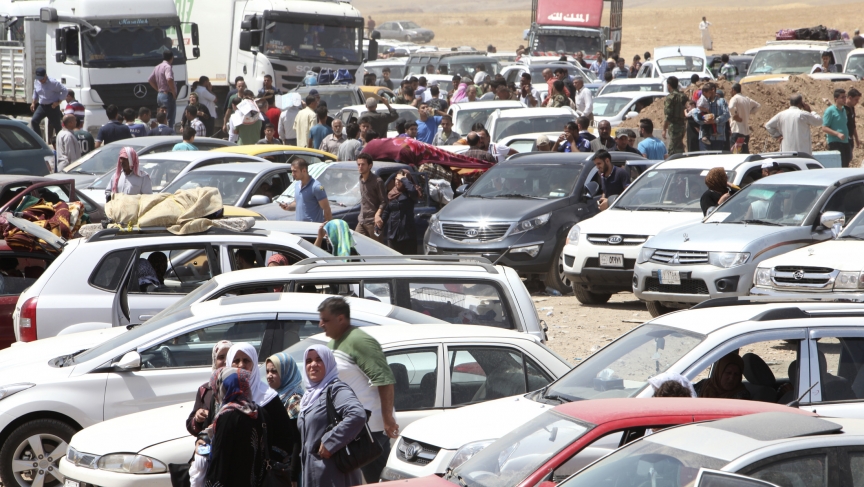 Families fleeing violence in northern Iraq wait at a checkpoint on the edge of Iraq's autonomous Kurdish region. Some 500,000 people are believed to have fled the city of Mosul in 24 hours.

Hundreds of thousands of Iraqis are on the move, fleeing from their homes as militants seize control of huge swaths of northern Iraq.

In just 24 hours, Iraqi government forces have lost control of Mosul, Baiji and Tikrit. Baiji contains a power station that supplies much of Baghdad. Fighting is now reported on the outskirts of Samarra, just 70 miles from the Iraqi capital.

One estimate placed the number of Iraqi troops in the north at 60,000 just a couple of days ago. Now there appear to be none. They appear to have all deserted, surrendered or fled. A few have been killed but there appears to have been no serious resistance to the insurgent invasion.

The insurgents are led by an al-Qaeda inspired group, the Islamic State in Iraq and Greater Syria, known as ISIS or ISIL for short. Reports indicate they are getting support from the Sunni population which feels alienated from the government in Baghdad.

Despite billions of dollars from the United States being invested in the Iraqi army, that part of the army in the north disintegrated in just 24 hours.

The problem with the army is corruption, according to Ghaith Abdul-Ahad, a journalist with The Guardian.

Aram Shakaram says he’s seeing massive traffic jams and blocked roads in Erbil, a city in the autonomous Kurdish region in northern Iraq. Shakaram is acting country director of Save the Children.

"You could see people even sitting in car trunks," Shakaram says. "And hundreds of thousands are thought to be on the run as well, but they have not made it to the borders of Kurdistan region yet."

Shakaram says local authorities in Erbil are preparing camps for some of the 300,000 displaced Iraqis expected to arrive in coming days. He says the exodus has taken everyone in Erbil by surprise, including aid groups.

"This scale of displacement was not expected," Shakaram says. "Unless the international community responds immediately, it is going to be beyond the capacities."

The Kurdish area, where Erbil is located, is seen as a safe haven by the displaced people.

Militants wrested control of the city of Fallujah and parts of Ramadi earlier this year.  Now some residents of Erbil wonder if it might be next.

Shakaram, however, says he doubts Erbil is in any immediate danger.

"It could be, but here security forces are on alert, and what we are reading is reassurance that this place will be safe," he says. Erbil is defended by the 'Peshmerga', the forces of the Kurdish autonomous region. The Peshmerga has so far been neutral in the conflict between Iraq's Sunni and Shia populations.

With Sunni insurgents closing in on Baghdad, people there are scared, according to Suadad al-Salhy of the New York Times. Residents are stockpiling essential supplies while young men are trying to buy weapons. Everyone assumes the government can no longer protect them.

Salhy says she’s certain the Shi’ite population will fight hard if the Sunnis try to push toward Baghdad. “They will defend the (holy Shi’ite) shrines in Samarra,” she says.

“They don’t care about the government,” she adds. “They just want to protect themselves, and protect their sect.”

“This will be a sectarian war between Sunnis and Shi’ites. This is widely expected,” Salhy says.