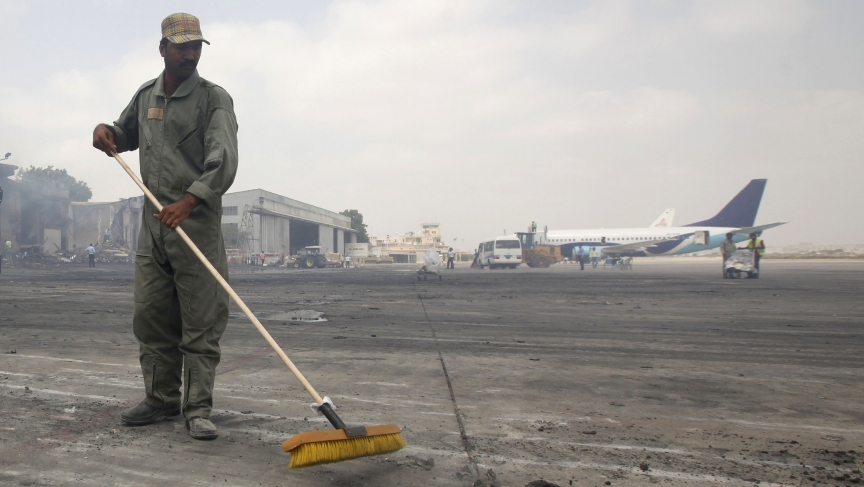 A man clears debris from the tarmac of Jinnah International Airport, after an attack by Taliban militants in Karachi June 10, 2014. Taliban militants disguised as security forces stormed into Pakistan's busiest airport on Sunday night, triggering an all-night battle in which at least 27 people were killed.

When international news reports speak of Taliban attacks, they usually refer to Afghanistan. But in the last few days, the Taliban of Pakistan are in the news after launching two deadly attacks to disrupt Pakistan's main airport.

A Taliban spokesman said the attacks are a sign that peace talks with the Pakistani government have broken down.

The Pakistani Taliban came together in 2007 from dozens of militant groups and gangs. This mixture of forces is distinct from the Taliban in Afghanistan and has been fighting in Pakistan to impose Islamic law. Chishti says they have killed thousands of people with great barbarism, including beheading children.

“The Americans and Pakistanis have somehow agreed that the Afghan Taliban have to be given a stake in Afghanistan, as compared to the Pakistani Taliban that are actually beheading people. They are sub-humans, they’ve got hundreds of suicide bombers,” says Chisti.

“These are people who we’ve actually tried talking to and, everytime we talk, the talk fails.”

It is the Afghan Taliban who just negotiated the release of American POW Bowe Bergdahl with the US government, in exchange for the US releasing five leaders who are now in Qatar.

“What you see in Qatar right now is actually a rational discussion between two nations for the future of Afghanistan,” explains Chishti. But he doesn't think that is possible with the Taliban in Pakistan.

“I think the Americans and the Pakistanis for the first time, after long, long years of discrediting each other, stand actually on one line,” says Chishti, and see the Taliban of Pakistan as a security threat to Americans, Pakistanis and even those in neighborhing Afghanistan.

“We’re a poor country, we’re short on resources, there’s a lot of internally displaced people who are coming in and Taliban are part of these people,” he says. The Pakistan military had mainly been fighting them in less populous areas, but Chishti says that is changing. “They are actually coming into urban areas and, as soon as Pakistan goes after the militants in one part of the country, [the Pakistani Taliban] actually retaliate in urban areas.”

Chishti says that in Karachi, a city of over 23 million people, life continues despite the violence, but “Pakistan as a nation has realized that militant Islam, or tribal Islam as we call it, sponsored by the ideology of al Qaeda, is the biggest national security threat that Pakistan faces, which is a huge change."