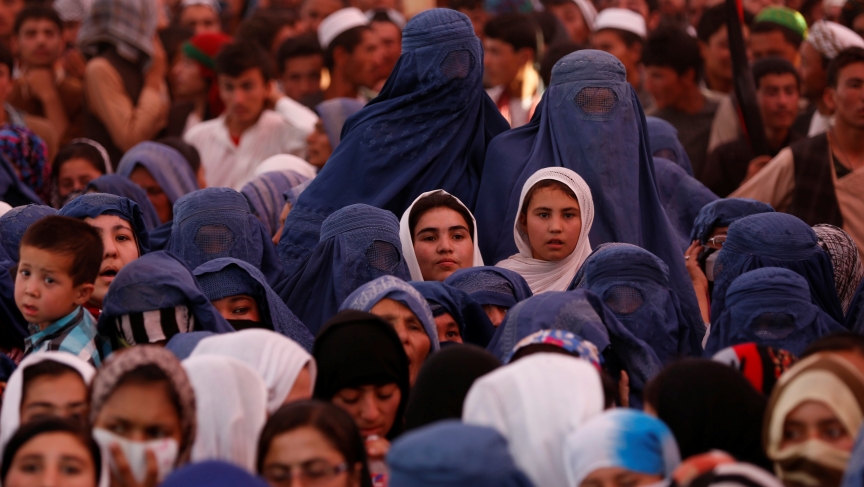 Women attend an election campaign by Afghan presidential candidate Ashraf Ghani Ahmadzai in Jozjan province on June 2, 2014. The second round of Afghanistan's presidential election will take place on June 14.

The negotiations to free Sgt. Bowe Bergdahl from five years of captivity by the Taliban started quite some time ago, and the original aim was about a lot more than just freeing an American soldier.

PRI's The World Host Marco Werman spoke with Michael Semple, a leading expert on the Taliban who splits his time between Harvard's Kennedy School of Government and Queens University in Belfast. The following is lightly edited transcript of their interview.

Q: These talks were about a lot more than just a prisoner swap, weren't they?

Absolutely. It took almost three years to put this deal together. Earlier, there were ideas of a much broader political process. But in the end, both parties stripped it down to the basics — prisoner releases.

Q: What were some of the early expectations of the negotiations?

The idea was that letting prisoners out of Guantanamo and getting them to Qatar, a place where they would not rejoin the armed struggle, could be used as a confidence-building measure for launching negotiations between the United States and the Taliban, and the Afghan government and the Taliban. And these talks would not just be about the fate of a few people, but about the fate of Afghanistan and putting an end to the conflict.

Q: So, the talks didn't have much to do with Sgt. Bergdahl at first?

My interpretation is that Bergdahl was sort of an appendage to these talks. There was the idea of helping the Taliban establish a presence in Qatar, and putting some of their people there in Qatar. And then came the idea of getting Bergdahl out. It seemed sensible. But in a way, they ended up with the tail wagging the dog. The big ideas never happened, and the Bergdahl idea has.

Q: If the US wanted to negotiate with the Taliban to create an opportunity to wind down the conflict, what was in it for the Taliban?

Some of it was the same. The Taliban has resented being treated as pariahs for over a decade. So, I'm sure they felt that the negotiations would help legitimize them somewhat. They would do this by being involved in a diplomatic process. One of the ways that they described the effort to their own members was by saying, 'we've been soley engaged on the military front over these years and we've made achievements on the military front, but we have to open a political front as well, because the military one is not sufficient by itself.'

Q: When the process got to the point where it was all about a prisoner exchange, did the objectives of the Obama administration shift at that point?

During 2013, the US administration made a massive political investment in trying to get this going — the big idea of using Qatar, using the Taliban in Qatar and the possibility of using a prisoner exchange to launch a peace process. They really invested heavily in this. And a pivotal moment was in June of last year, when, in an orchestrated move, there was an attempt to open this Taliban representative office [in Qatar]. And, of course, it fell apart on day one. Because the Taliban, for various reasons, breached an understanding that they would not make the office look like an embassy. And the Kabul government, which had been on board until then, immediately withdrew its support for the process. So, after an intense six months of the US spending all of this political capital for people to agree to this, they realized that the big political idea was not going to happen.

Q: The five Taliban leaders in Qatar can't even hook up the telephone, from what I understand. How important are these guys and what are they going to be doing for the next year in Qatar?

In following the debate, a lot of people are saying that this is sort of a fictitious arrangement by the Qataris, that they're not going to be able to guarantee what these Taliban leaders will be doing. I think the Qataris have established a very good track record of being able to enforce what they agree to, in terms of the presence and the movement of these people. They will keep quite a close eye on these five Taliban leaders, who are committed to staying in Qatar for a year.

But I also think that these are five men who've just spent around 13 years in a high-security prison, away from their friends and relatives. And what they want, above all, at the moment, is to relax and spend time with their families. For them, it's a good deal also. Rather than returning to Pakistan or Afghanistan, where ultimately they would be under tremendous peer pressure to join the fight, which is ongoing. In Qatar, they don't have to make any excuses. They're not allowed to go back to the fight. And I think the first thing that they're going to be doing is get themselves treated medically. As we speak, they're getting check-ups. Beyond that, I do not anticipate that they're going to be somehow running a Taliban office. I think to a large extent, they're going to be cooling their heels.

Personally, I would be delighted if anybody who has responsibility for mediating in the Afghan conflict was actually able to talk with these people, listen to what they have to say and basically try to persuade them to use their influence to help bring the Taliban to the negotiating table and to try and end this conflict. That's not part of the deal. Nobody's committed to doing that. But an opportunity has been created by the fact that senior members of the movement, who do have quite a lot of respect inside the movement today, are in a safe place where they're no longer part of the command structure and no longer part of the fight. And outside mediators might be able to negotiate with them.

Q: What about the government in Kabul, where does all this leave it and how did it fit into these negotiations?

The government in Kabul came out complaining about the deal. I think that's sort of an instinctive reaction. It's almost like partisan politics in the United States, where you have to say something whether you believe it or not.

The government in Kabul was intimately involved in the process in Qatar during the first half of 2013. And I think the US administration really bent over backwards to bring them into it. One of the conditions that the US insisted on from the Taliban was, if a representative office in Qatar was opened, then the second meeting it would have to take part in must be with the peace council of the Afghan government. Well, that all died when things fell apart in June 2013. I don't believe there's been any serious involvement for the Afghan government in the deal here. The Taliban had to move, the US had to move. And the Afghan government was not involved.

But Afghanistan is at a critical point now, because in a week Afghans go back to the polls for a second round of their elections to choose a successor to President Karzai. Shortly after that, there will be a new president. And both of the leading candidates have made it clear that it will be a priority for them to try and reinvigorate the peace process. [Both candidates say they will] try to persuade the Taliban that with the fate of foreign troops in Afghanistan settled, the casus belli that the Taliban have been talking about in recent years is off the table, that it no longer makes sense for the Taliban to fight on, that they will try to get the Taliban back to the negotiating table. There's another interesting bit of timing of the Taliban leaders in Qatar. They're already in place and, soon, we'll have a new leader in place in Kabul. And I think that leader will charge his high peace council to go back to all the contacts they have with the Taliban and try to get them talking. I think Qatar will be a go-to address for them.

Q: What are your thoughts on this whole Bowe Bergdahl process?

I feel a little bit like we can draw parallels between Bowe and the five people who've been at Guantanamo. Bowe's lost five years of his life. Those people have lost 13 years of theirs. Whatever happened before, however Bowe got himself into Wazirstan and however those others got themselves picked up, it was a long time and tough detention, and you have to feel good that these people are out now, and going to spend some time with their loved ones.