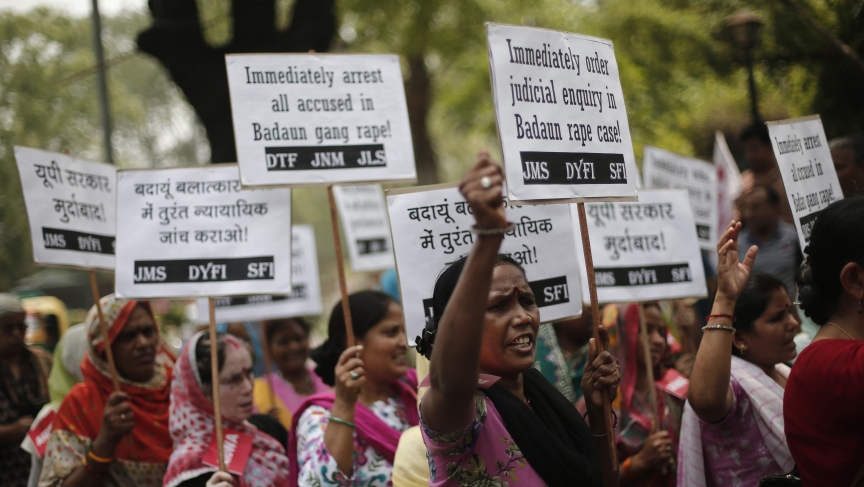 Demonstrators from All India Democratic Women's Association (AIDWA) hold placards and shout slogans during a protest against the recent killings of two teenage girls, in New Delhi May 31, 2014.

I was visiting the United States when news about the latest horrific gang rape in India made headlines last week. Two teenagers, cousins, gang raped and murdered, hanged from a mango tree in their village in Badaun district in the northern state of Uttar Pradesh.

The grisly photo of the girls’ dead bodies hanging from a tree showed up again and again on my Facebook feed. I followed the story online with a sinking feeling in my stomach.

In December 2012, the brutal gang rape and murder of a young physiotherapy student in New Delhi had led to unprecedented protests in the city and elsewhere in the country. I followed that story from the US too. But at the time, I felt hopeful — hopeful that perhaps such widespread outrage against sexual violence meant that we would finally find ways to make my country safer for girls and women.

There were a few protests this time, but none came close to the scale of the 2012 protests. The family members and neighbors of the dead girls sat by the tree where the girls’ bodies hung, refusing to allow the bodies to be taken down until the police registered the case. Elsewhere in Uttar Pradesh and in New Delhi, women’s rights activists organized marches and vigils. But the vast majority of ordinary, middle-class Indians who took to the streets in 2012 after the Delhi gang rape, stayed put and attended to their own business.

The average middle-class urban Indian doesn’t relate to women like the Badaun rape victims. For one, their life in rural India is far removed from those of the more privileged, city dwellers. Then, the victims belonged to the Dalit community, the lowest of all castes, while the alleged perpetrators belonged to a higher caste. Caste-based violence, including sexual violence, is still rampant throughout India, especially in a state like Uttar Pradesh. Poorer women are also more at risk of sexual abuse, even in cities like New Delhi. Rarely do these cases spark public outcry.

I returned home to New Delhi on Wednesday. The Badaun sisters were still in the news, but more pressing matters had taken over space in newspapers, like the death of a minister in a road accident. But I didn’t have to turn to the papers to be reminded of the daily threat of violence faced by women, especially those from poorer communities.

Within an hour of my arrival, Paaro, the woman who cleans my apartment stopped by to tell me about the rape of one of her friends. The victim, hardly 25, had recently moved to New Delhi from the eastern state of West Bengal in search of work. On Monday of last week, Paaro had to rush the young woman to a hospital after finding her outside one of the houses she worked in, bleeding profusely. She told me the woman had been raped by a man who worked in the same house when the owners weren’t at home. “The doctor says her uterus is damaged and she won’t be able to have children,” Paaro told me.

This was a stark reminder of the risk women like Paaro and her friend face every day. Fortunately for Paaro’s friend, the police did register the case and arrested the accused. But the vast majority of these cases go unreported. Even if they are reported, the police often refuse to take a complaint. Almost none of these cases lead to public protests. When they do, it’s more likely by people close to the victim. But unlike the Delhi gang rape or the rape of the Badaun sisters, these cases rarely ever make front-page news.

Thursday, The Hindu newspaper ran a story on page five about a group of Dalit women from the state of Haryana who were evicted by police from their protest site at Jantar Mantar. The women had been protesting against the alleged kidnapping and gang rape of four girls from their community by men of the powerful Jat community. Threats from Jat men drove the victims and other Dalits out of the village in the weeks since. For two months, these women have been demanding justice for the victims and the arrest of their village headmen who they claim was “hand in glove with the perpetrators of the crime.” The protesters say that their voices have remained unheard and the victims have yet to receive justice.