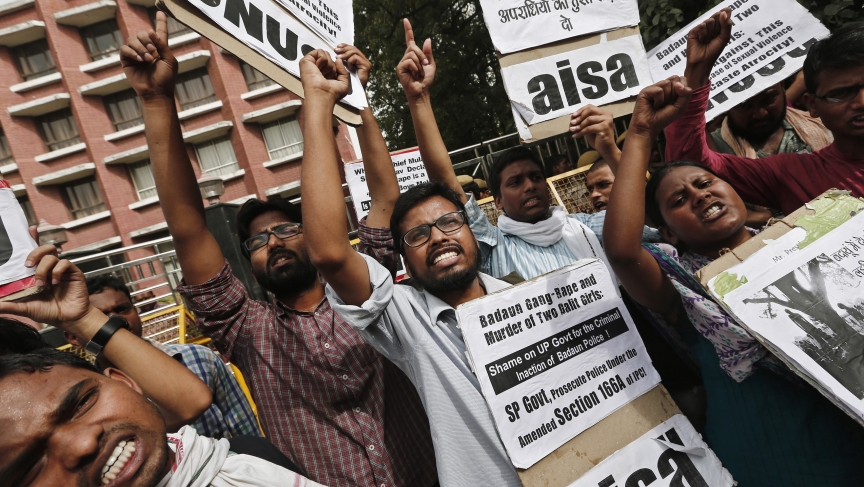 Students hold placards and shout slogans during a protest against the recent killings of two girls, in New Delhi May 30, 2014.

The traumatic history of cases of violence against women in India seems to repeat itself. Rapes and gang-rapes have shocked the country and made headlines time and time again.

The top news story on Friday in India is about two teenage girls who were gang-raped in their village in the northern state of Uttar Pradesh. They were then hung from a mango tree.

The girls, who were 14 and 15, had gone into a field close to their home because there were no toilets in their home.

Their family belonged to a lower caste called Dalit. People in that caste are sometimes referred to as "the untouchables."

So far, at least three men, including one policeman have been arrested. They were from what's considered a higher caste in India.

One of the fathers of the girls told the news media there, that when he went to the police to report that his daughter was missing, they "refused to look for [his] girl."

But Supriya Nair, associate editor for a website called "Caravan" in New Delhi, says the fact that the men hung these girls shows that there is a "culture of impunity."

"The reason these girls were hung is not that the perpetrators feared retribution but simply that they thought they could get away with doing these things. There is a law and order problem here that we need to focus on and address in a sustained way," she says.

Nair says the previous case of gang rape in India which took place back in December 2012 started a major debate about violence against women in the country.

She says the topic of violence against women is now part of the every day conversation and some changes have been made in the law.

The latest case, however, shows that the country still has a long way to go in making India a safer place for women.

Nair says this case also shows the "vast gap between, not only men and women in India, but also between groups of women."

"I am a metropolitan journalist, I am relatively privileged, those teenagers simply went out into the fields because the needed to relieve themselves because there are no toilets in their home," she says.

While these differences exist, Nair says, as a journalist, she feels her responsibility is to "listen to the voices of these marginalized women and make sure that help arrives at the right time when they need it."

She believes the answer to getting closer to solving this problem is not just to show outrage but to keep the attention focued on the subject.